The Force is Strong in Welsh Theatres This Spring

Dirty Protest blasts off into 2018 with launch of project inspired by Wales’s claim to Star Wars fame.

Dirty Protest, Chapter and the Torch Theatre, takes the 1979 Pembroke Dock building of the full-scale

Millennium Falcon as its inspiration. 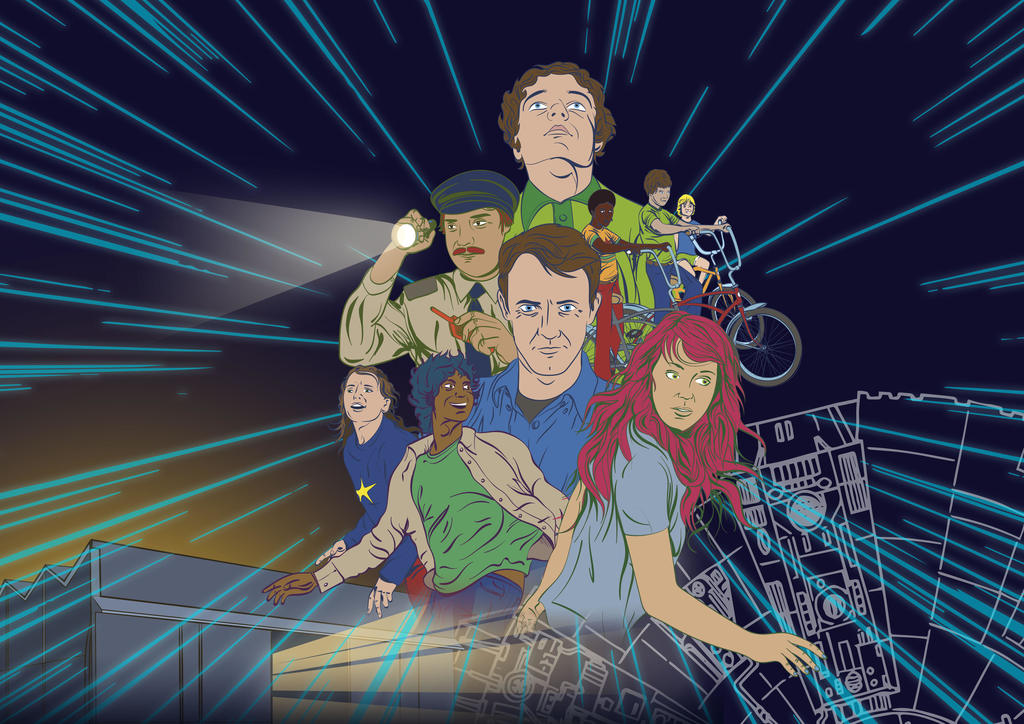 The drama is inspired by the real-life construction in Pembroke Dock shipyard of the full-size Millennium Falcon spaceship, helmed by Harrison Ford's Han Solo in the film 'Star Wars: The Empire Strikes Back'. Set in Pembroke Dock in 1979 and 2014, our hero Sam is a Star Wars obsessed kid in 1979 and a single father in 2014. His father is a redundant shipwright, employed to build the Millennium Falcon.

Incredibly, far from being from a long time ago in a galaxy far, far away; the ship featured in the second film in the Star Wars saga was constructed by a small army of tradesmen in the Pembrokeshire town’s Western Hangar. All were sworn to secrecy as the ship came together far from prying eyes. Now, Dirty Protest brings the story to the stage in a production that combines the thrill of 1980’s adventure movies with an intergenerational family saga all of its own.

When Star Wars superfan Sam discovers that the Millennium Falcon is being built in his home town, his life is turned upside down. Determined to get inside the cockpit; his only obstacle is his stepdad Mike, guardian of the secret hangar where the legendary ship is being built in Pembroke Dock. Fast forward to 2014. Sam’s daughter Lizzie goes missing, forcing him into a desperate hunt to bring her back to safety before it’s too late.

Never mind saving the galaxy, sometimes you just have to save your own world. Lightspeed from Pembroke Dock explores what happens when Hollywood’s best-loved spaceship lands on your doorstep. The production is billed as a story of hope, courage, and how to be a family when it seems the universe is against you.

Starting in Chapter, Cardiff on 4th April, the five-week tour concludes by taking the story back to its home in Pembrokeshire, with performances at Torch Theatre, Milford Haven beginning of course, on May the 4th. Alongside the Torch performances, Dirty Protest will organise a community festival, celebrating Pembrokeshire’s connection to the epic film franchise. Pembrokeshire born writer Mark Williams said:

“In 1979, I was too young to be aware of the rumours that the Millennium Falcon was being built on my doorstep in Pembrokeshire. Learning about it later, it felt almost too amazing to be true. The thought of actually getting to see it – what that would mean to someone of Sam’s age, and how that might shape his life – was what first inspired Lightspeed.

Some of my earliest memories are of seeing the Star Wars films for the first time. They continue to influence everything I write, in countless ways. For all their incredible effects and thrilling pace, at heart the Star Wars films have always been about underdogs and unlikely allies overcoming the odds stacked against them - stories of family, friendship, and hope”.

“We are thrilled to be developing Mark Williams' play Lightspeed From Pembroke Dock as a flagship production in our 10th anniversary year. The Millennium Falcon was the last ship to be built in Pembroke Dock and this true-life story truly had a global impact from Wales. Through placing Wales at the heart of one of the most iconic film franchises of the last fifty years, we hope Welsh audiences will see themselves and their communities reflected in this based-on-true-events story.

We first produced a rehearsed reading of the script as part of our new writing festival Dirty, Gifted & Welsh, which we organised with National Theatre Wales at the Angel Hotel in Cardiff in 2016. We loved the first reading so much, that we committed to produce the play. Mark has written many scripts for our well-loved short-play nights and we are pleased to be producing his first full-length play for the company. The production's director, Julia Thomas has also directed many scripts for our short play nights, so we are very excited to bring Julia back to direct in Wales, fresh from her development as RTYDS director at Leicester Curve. We at Dirty Protest are passionate about providing opportunities for Welsh and Wales-based writers, directors and actors to develop their talent and grow careers in Wales.  By bringing together such a strong team alongside a national programme of writing workshops and a community festival in Pembrokeshire on May the 4th weekend, Dirty Protest will support the development of some of Wales' most exciting creative talents, whilst also developing artistic opportunities for writers, artists and anyone else who would like to join the rebel alliance.”

Dirty Protest is Wales' award winning new writing theatre company dedicated to producing, developing and promoting new writing and the writers of Wales. Lightspeed From Pembroke Dock is a landmark production in the company's ten-year anniversary celebrations, alongside a year-long programme of work. Between 20 – 23 December 2017, the company will stage a development production of a new Christmas play Cut and Run by Branwen Davies in Chapter, starring Catrin Stewart (Bang, Stella). following a critically acclaimed sell-out run of Alan Harris’s Sugar Baby at this year’s Edinburgh Festival Fringe.  The company’s objective is to bring excellent, new theatre to audiences by creating inclusive and exciting experiences, and to introduce new audiences to theatre and extend the reach of new writing across Wales. This new production will feature closed captioning via Ipad of every performance, increasing access for D/deaf, deafened and hard of hearing audiences throughout the tour.