My grandmother, Morfydd Edwards, only occasionally spoke of her brothers Phillip and David, Phillip’s death, and of what occurred in Dinas during the Great War to my father, Emrys Edwards.
She, including the rest of her family and many other grieving families, attended the dedication ceremony that took place in the grounds of Bronwydd House for the unveiling of the Cenotaph on Porth Square in 1928. The only time my father ever saw her angry was when there was a conversation in the house with neighbours and someone would question why the men had died. She always replied, “They died to protect this country and the same thing would happen again with the men if they were asked.” My father never heard adverse talk characteristic of the revisionist angst of later years while he was growing up in Dinas about the Great War. "The suffering of the survivors was done is silence," he said.
Phillip, like the rest of the men from Dinas and the valleys, including his brother David, joined the army soon after war was declared. His initial training was with the 2nd Battalion, 10th Welch, D Company. Training took place in Rhyl. In a letter dated 27/12/14, he says he is suffering from a severe cold and apologizes for his poor handwriting. His friends from Dinas are with him and he mentions George Price is coming home, so Dai will have a butty to travel with him on the train. This is his third letter, he says, since he came to Rhyl and more should have reached home by now.
My grandmother remembered the tearful farewell the family had on Porth Station as other families saw their sons leaving for their training depots. Phillip left with his regiment for France in 1915. One postcard my grandmother cherished from him had embossed roses on it. A simple message he wrote on the reverse: “How goes it, Morfydd!”
One evening, towards the end of June 1916, my grandmother’s mother, Sarah Davies of Brook Cottage, Appletree, went to the pantry to fetch a cup of milk and she screamed. Standing in front of her was her son Phillip, in full battle dress, his image fading as she started to cry out. William, her husband, ran to her and could make little sense of what she said. When she did tell that she had seen Phil standing in front of her, he told her it must have been a trick of the light. Shaken by what had occurred, they slept badly that night. A week later, a telegram arrived, informing them that Phil had been killed in action. The day of the battle was the same day his mother had seen him.
A Death Penny was sent to families in Great Britain for the loss of every soldier in the Great War. Later, the Death Penny that had Phil’s name on it was put into a locked drawer, looked at once by my grandmother's parents, and forgotten about for many years.

The photograph is of Phillip Davies in one of a number of studio photographs that were taken. 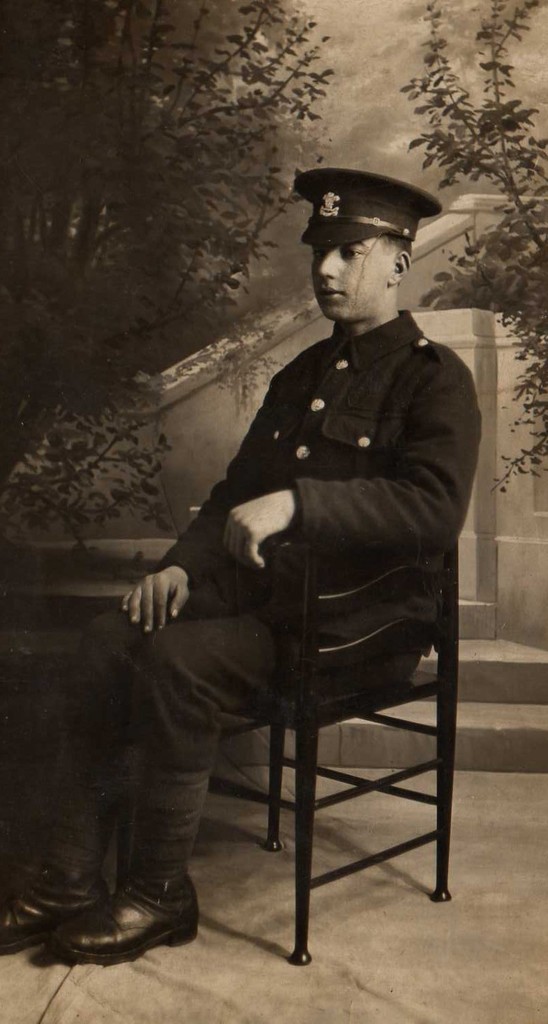