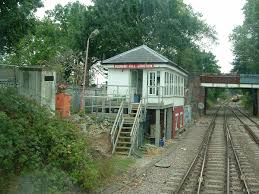 I mentioned in an earlier blog that people I spoke with enjoyed a good ghost story and that there were possible stories that could be adapted. Charles Dickens was the one name that frequently came up and it was not just his famous ghost story "The Signal-Man " published in the 1866 Christmas edition of his magazine All The Year Round ; it is allegedly based on a true story and this is confirmed by various Dickens scholars. Other stories written by Dickens were also mentioned: "The Ghost in the Bride's Chamber," "The Story of a Bagman's Uncle, and "To be Taken with a Grain of Salt."The setting for "The Signal-man" is Mugby Junction and the narrator is a man called Barbox Brothers who is interested in railways. His problems begin when the signal-man tells him that he is being plagued by a phantom that appears at the mouth of the tunnel. I have included an extract from our own adaption that will be part of a future rehearsed reading.

Brothers:  You must never grow tired of peoples' company, or the the advice that they may offer. Solitude eventually breaks a man's heart and you must not choose this avenue above companionship. You strike me as being a man who has seen much and hides his emotions from others for fear of being scorned.

Signal-man:  That is most perceptive of you, sir. I have been so unsure of myself of late and have not been sleeping. The kettle will be boiling soon.

Brothers:   That can wait a moment. Tell me, why are you of a nervous disposition? You will find me most sympathetic.

Signal-man:   You would mock me if I gave you the real reason.

Brothers:   I would never stoop that low.

Signal-man:   Well, I believed you shouted "Halloa! Below there!"

Brothers:  I was going to say those exact words when I changed my mind.

Brothers:   It was the light from your lamp that dissuaded me. I believed that I was lost and I would have called out those words to draw your attention.

Signal-man:    You stopped at this spot because you saw my lamp?

Signal-man:   Well, this is peculiar. I have never been one to be frightened of the dark. It doesn't pay to be of a nervous disposition. When you work in a secluded spot such as this you have no option. I have heard strange stories from my friends of what they have seen. My mind is open on such matters that are unexplained. I know not how to explain myself. Could there be a way of knowing the future?

Brothers:   When first I saw you, you looked back down the line because you believed the shout emanated from the tunnel.

Signal-man:    Then you saw the danger light?

Signal-man:    I wish to change the subject. My eyes are growing tired.