The Tempest on Fire - Fire Theatre Spectacular at Penpont near Brecon

The Tempest on Fire

“Here’s a maze trod indeed, through forthrights and meanders!”

This autumn half term holiday the Department of Enjoyment offers a Halloween treat with a difference: Shakespeare’s The Tempest by fire light, complete with fire circus performances to a live world music soundtrack. The Tempest on Fire is the brainchild of David Goff Eveleigh, the Artistic Director of Department of Enjoyment, and has been 13 years in the making: in 2000 David was commissioned by Penpont Estate near Brecon to design and build a permanent maze depicting the Green Man’s giant head in a series of interlocking gardens.  It is so large that it can be viewed on Google Earth.

The vision for the show is based on an evolution of the past successes for the spectacular Hay on Fire Festivals devised and directed by the Department of Enjoyment and enjoyed by large family audiences.

“The vision for my fiery interpretation of The Tempest involves transforming the Greenman Maze and surrounding woods into Prospero’s island.  I see Caliban as the embodiment of the mythic Green Man and the stunning location at Penpont as Caliban’s domain of wild and untamed nature” says David Goff Eveleigh. 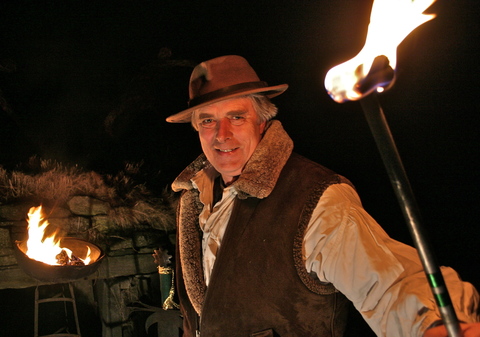 “Our audience’s enchanting journey starts from Theatre Brycheiniog where ancient mariners usher all aboard coaches to avoid the coming tempestuous storm.

Their journey continues on the lawns in front of Penpont house which will be transformed into a labyrinth featuring thousands of sparkling LED lights, highlighting dancing nymphs in a sea of stars.

“The surrounding woods become home to unearthly spirits who are truly wild in nature and my maze gardens become the central focus of the action topped off with a flying trapeze rig” says Artistic Director David Goff Eveleigh.

“Exciting and beautiful ... takes Hay on Fire festivals to a new wonderous place" says Robert Plant of Led Zeppelin.   This extraordinary fire theatre spectacular has been backed by the rock star who generously supports the project.  He and his family have enjoyed previous Hay on Fire Festivals and know the natural beauty of the Penpont site well.

The Tempest on Fire is financially supported by the Arts Council of Wales, Theatre Brycheiniog, Sustainable Tourism Powys – and Robert Plant of Led Zeppelin.

The Tempest on Fire takes place during the autumn half term holidays – and promises to be an unbeatable Halloween treat: TUESDAY 29 OCTOBER – SATURDAY 2 NOVEMBER (6pm) at Penpont Estate, Near Brecon.

The Tempest on Fire is a site-specific outdoor performances at Penpont Estate’s Greenman Maze www.penpont.com