Hi,
Just a quick note to let you know about the Welsh previews of our new Edinburgh show The Very Grey Matter of Edward Blank at Pontardawe Arts Centre on 28th July 2015 at 2pm and 7.30pm. We're really excited about this show and it's shaping up to be a cracker so we'd love to see you there. Tickets are here:
http://www.nptartsandents.co.uk/en/event-16972
Blurb is below, If you miss us in Wales, you can catch us at Wiltons Music Hall in London on 31st July and then at the Assembly Roxy
for all of August. Hope to see you there!
All the best
Becca 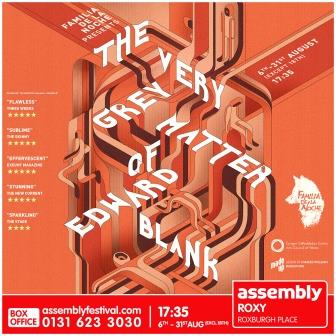 An exceptional literary talent and ghost writer, Edward Blank has the ability to change Mills and Boon into James Joyce before breakfast. His radical rewrites and astounding editing means that demand for his work is so great his letterbox clatters non-stop with tapes for transcription and Edward never leaves the solitude of his tiny magnolia flat.

But Edward is far from alone. Emerging from his fractured conscience is an anarchic family of imagined characters, each with a hook in Edward's life that pulls him deeper into fantasy. Each day the circus begins anew and Edward seems happy in his ordinary-extraordinary existence until, one day, a voice on an audio tape changes everything.

Following the 5-star success of The Greatest Liar in all the World, Familia de la Noche create a hilarious, heart-breaking story of madness and lost love using their signature style of dark comedy, clowning, live music and storytelling.