The monographs of Thinking Through Performance will complement and augment the existing Performance Research Books series, Inside Performance Practice, that has focused upon specific performance companies or artists and the engagement of scholarship with practice in relation to a distinctive body of work. Thinking Through Performance will allow more cross-cutting, interdisciplinary and speculative writing around and through performance and will enable, through translation, emerging and ground-breaking critical theory about performance, otherwise inaccessible to an English-speaking readership.  We are delighted to launch this series with Valentina Valentina’s intellectually thrilling Worlds, Bodies, Matters.

THEATRE OF THE LATE TWENTIETH CENTURY 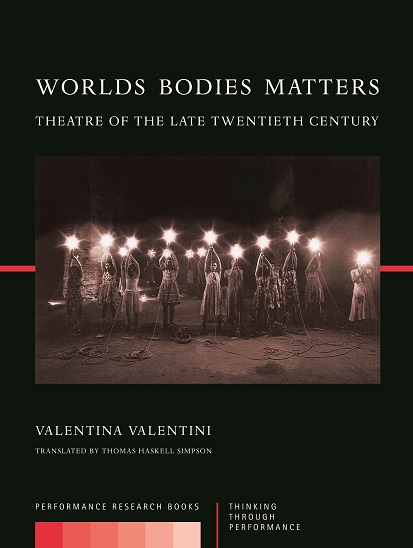 What myths nourish today’s theatre? What imaginary worlds does it evoke? What are its recurring stories? What are its visions of the world?

In this study of late-twentieth-century theatre in Europe and the Americas, Valentina Valentini analyses the changed relations between theatre and contemporary reality, between actors and their characters, and examines new roles demanded of both producers and audiences in the realization of theatrical art. In particular she identifies and traces the decisive influence of visual arts and new media on today’s performance scene, a confluence of artistic practices that, Valentini argues, restores theatre to a privileged space in the panorama of contemporary art and aesthetic reflection.

‘Valentina Valentini explores the sweeping transformations that have redefined traditional notions of text, actor, spectacle and audience. Situating her study at the intersections of theatre and visual arts across the centuries, she is equally at home discussing myth and media, drama and the postdramatic, body and image. The volume is strongly grounded in philosophical and theatrical perspectives and shaped by considerable knowledge of multiple art forms and art practices.’

Bonnie Marranca, Editor, PAJ: A Journal of Performance and Art

Valentina Valentini is a professor of performing arts and new media at the University of Rome ‘La Sapienza’ and the director of Centro Teatro Ateneo, Research Centre on Performing Arts, Sapienza University of Rome. She is the editor of the series Audio-Videoteca Teatrale published by Bulzoni and dedicated to the relations between sound and visual in the contemporary performance scene. Her research focuses on the interrelations between theatre, visual art and new technologies.

To purchase this book at the exclusive launch rate please order online.

Performance Research Books publishes generously illustrated and finely designed books that present documentation and analysis of contemporary performance practice – through the work of individual artists, companies and ensembles. Each publication combines texts, scores and critical reflection on a distinctive body of work, together with scholarly and theoretical analysis of the practice, the voices of practitioners, the view of the makers and the evidence of the work.

Performance Research Books is an independent venture of Performance Research, a specialist journal founded in 1996 and published bi-monthly (from 2012) which aims to promote a dynamic interchange between scholarship and practice in the expanding field of performance. Interdisciplinary in vision and international in scope, its emphasis is on contemporary performance arts within changing cultures.

Performance Research Books follows and expands the policy of the journal, but opens into publishing monographs, bookworks, and singular works on distinctive practice.