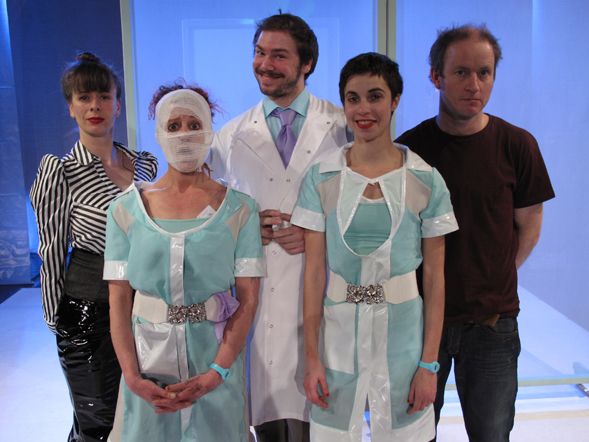 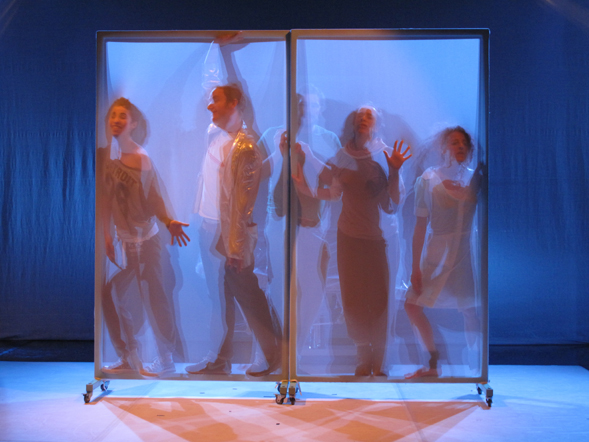 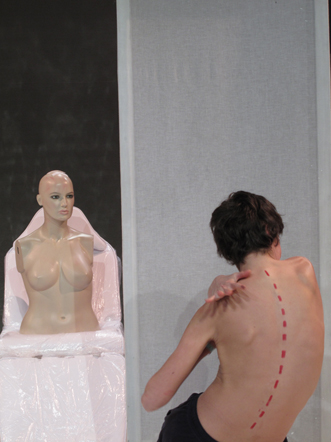 Prosthetic Soul is a collaboration between Mr and Mrs Clark and Volcano, which they call a medical musical. A little bit like an episode of Holby City with sudden bursts of songs, and lots of teeth and big hair.

But Prosthetic Soul is not a typical sugar-coated, painted smiles show. Instead it is a satire on the world of cosmetic surgery and perceptions of the beautiful body.

The plot is simple enough. Bob Johnson (John Norton) decides to have a free consultation with Dr Bondo (Mathew Crawford) because he wants to write better songs. He is mistaken for another patient and accidentally given full body liposuction, leaving him unconscious and at the mercy of the staff. The average day in the life of a cosmetic surgery.

There are similarities to Forced Entertainment's work as it has some wonderfully humorous moments while a sinister undercurrent flows through the entire play, which surfaces during a series of monologues.

The set was minimalistic and simple, resembling the clinical style of a surgery, while also being practical in allowing the actors a lot of space to perform in and for the quick costume and scene changes.

The performances by all five of the performers are outstanding. Rhiannon Morgan and Marega Palser as the two nurses bring a real energy to the play and keep the transitional periods sharp and seemless.

Crawford, as Dr Bondo, manages to express turmoil as he grapples with ethical issues and more importantly his desire to be a girl. Norton as Mr Stafford-Clark, a Dr Frankenstein esque surgeon, is funny and as Bob makes a convincing rigid coma patient.

Prosthetic Soul is a hilarious and intelligent exploration of cosmetic surgery, full of energy and vibrant songs.

Review by Paul Samson - The Cardiffian