Ian and I met on the Isle of Arran 20+ years ago whilst leading Oxfordshire Duke of Edinburgh expedition groups over the midge ridden island.  Since then we have lead many expeditions throughout the UK and shared great company, food, drink and stories.  Even though Ian smashed a sheet of ice over my head for photographic effect on an expedition once, I would entrust my life with him!  That is why he was the first person in my head when the idea of taking a group up Snowdon for this epic event came up and I was delighted that he trusted me on very little information and said "yes".

Below is Ian's blog from a completely non theatrical point of view! 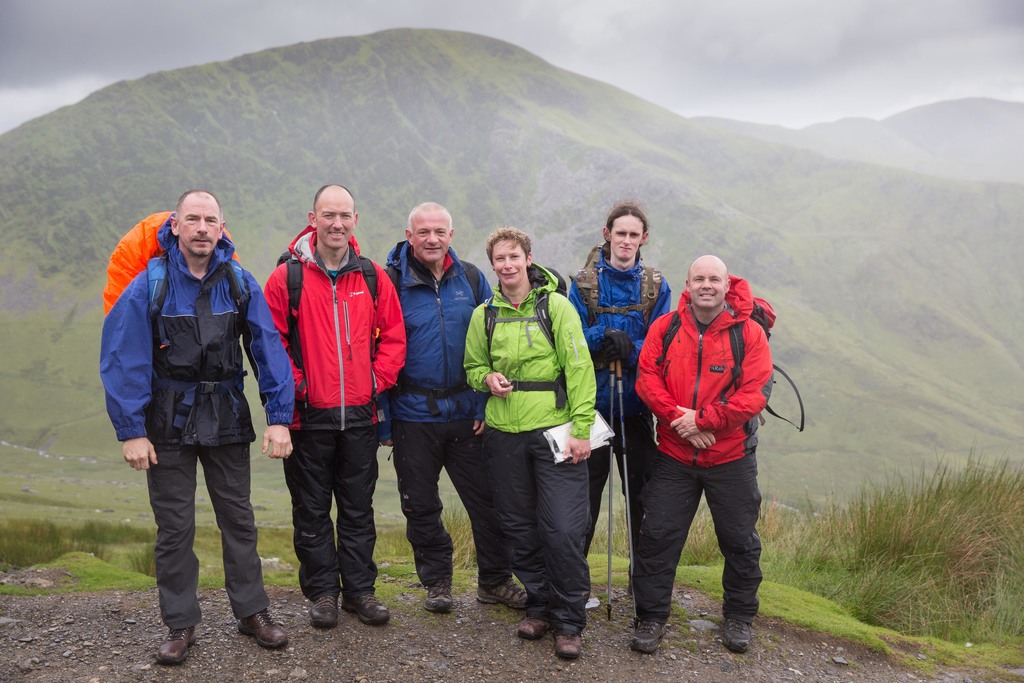 It's not every day you go to a barbecue where you're cooked for by a professional Shakespearean actor.  Traditionally barbecues take place outdoors, but the Welsh weather was on form.  Gerald (Tyler, Stage Manager for the Snowdon part of We're Here Because We're Here) took this in his stride and cooked for all tastes in quality, in quantity, indoors.  Along with my friend Michelle Carwardine-Palmer (Managing Director of National Theatre Wales), we had recently arrived at the cottage on the outskirts of Bangor where for the last few days the north Wales management team of the still-secret We're Here Because We're Here had been closeted.

This had all started for me a couple of weeks before when, in amongst the ads for pizza and cheap flights, I got a text from Michelle.  It was cryptic.  Cryptic not through intent, but because she didn't really know herself what she was asking me to get involved with.  After the event Claire (Assistant Producer) sent this: "Thank you for taking a leap of faith and agreeing to support this endeavour when we didn't know who would be part of the group, where they would go or even what they would wear on their feet."

All I knew was that my role "probably" involved being responsible for the health and safety of a group of young cadets in authentic First World War uniforms plus several creative staff and some assistants, all of whom would be aiming to walk to the top of Snowdon whilst performing tableaux on the 100th anniversary of the first day of the Somme.  I signed up immediately, my enthusiasm for involvement in such an exciting project overcoming any sense of uncertainty.  And I trusted Michelle.

During the next two weeks planning was taken seriously, risk assessments were completed and the debate about devotion to realism in costume really did extend to whether it was sensible for the volunteers to wear First World War hobnail boots for a modern day ascent of Snowdon.  In the end health, safety and pragmatism won and modern footwear was sported by all of the volunteers.  One of them got horrendous blisters from their present day footwear.  Maybe authenticity had it's revenge. 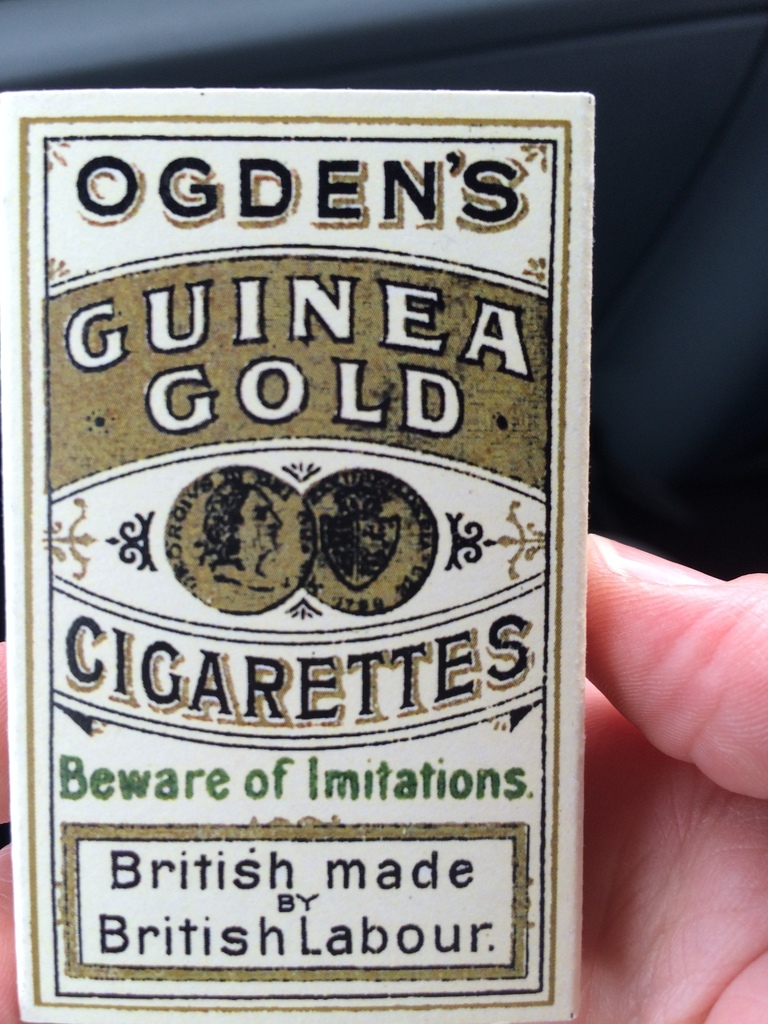 Our party consisted of nine volunteers in role, Gerald Tyler (Stage Manager), Mark Douet (theatrical photographer), Phil Jacob (cadet instructor) plus assistant mountain leaders Michelle, Loui and Joey.  My job was simple, to ensure that they were all safe on the mountain.  My main concerns on the day were the weather forecast which included thunder, how the heavy wool costumes would perform and how the different elements of the process (creative tableaux, interaction with other people on the mountain) would work together to maximise the impact of the event.  I needn't have worried.  The volunteers were amazing, staying completely in role (not interacting with anyone) from the start as we walked through Llanberis until we got back to the bus at the end of the day.  We decided to use the Llanberis track because of the scope to form tableaux for each passing train on the mountain railway; as we were still in Three Peaks season there were also plenty of people walking on the mountain.  At one point on the day the reach of the UK-wide twitter feed for we're here because we're here had reached 22 million.

The weather behaved itself until we got to Clogwyn station where everything was thrown at us for a while. 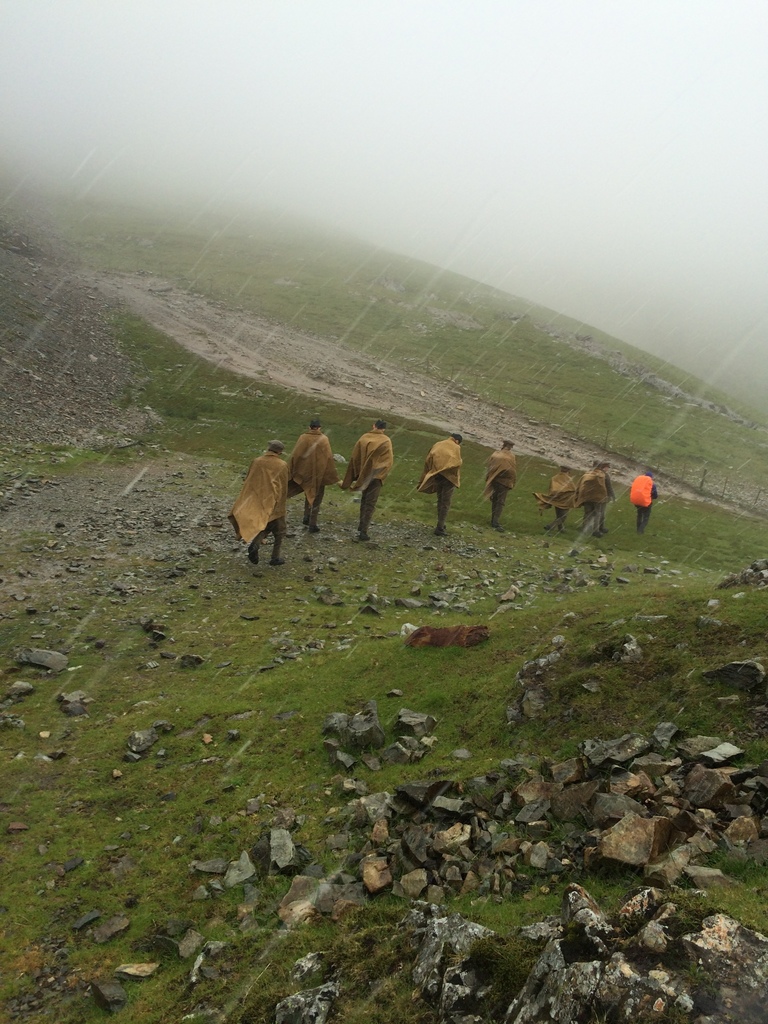 Having reflected on the whole experience, it was a privilege to work with such creative people, to see the effort that went into costuming and dressing the volunteers, the thought that went into how to maximise the impact on the day, the professionalism of the volunteers who played the role of soldiers, to be involved with a commemorative event which focussed on the human cost whilst exposing powerfully the futility of war.  It was humbling to observe the reactions of people to the tableaux that were formed as they passed by.  And fantastic that despite the involvement of thousands of people the whole thing remained secret in this age of social media.
(Our day started in Bangor here) 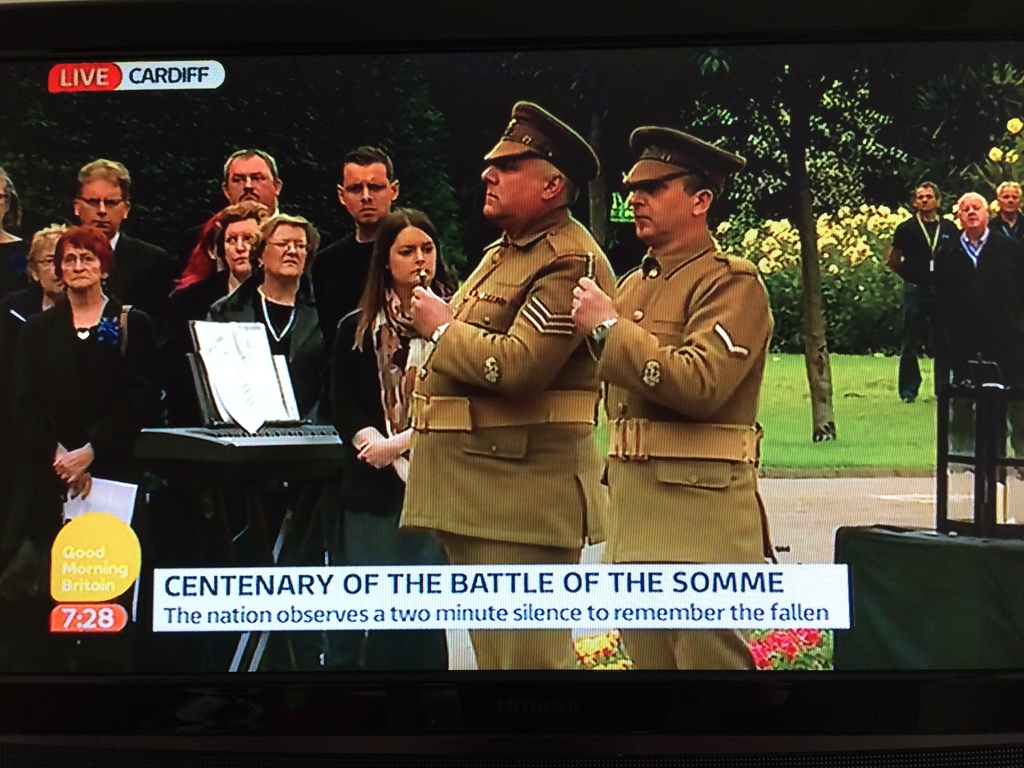 (It ended here.......we were there, and they were remembered) 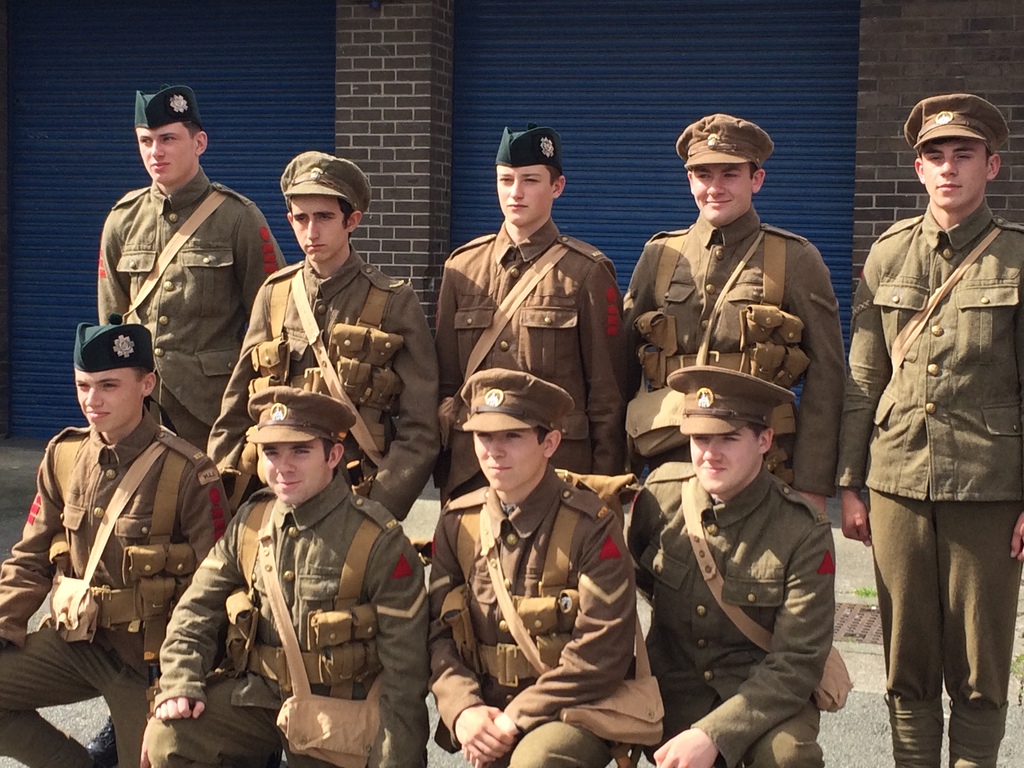 More images from the day are available here: https://nationaltheatrewales.org/we-are-here
Blog by Ian Rodham