SIX! FIVE! FOUR! THREE! TWO! ONE!
(ps. footnotes are at the bottom of the post) 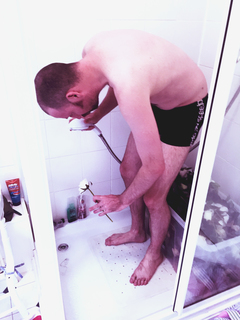 This photo is me washing a plastic rose in the shower. one plastic rose of about 500 roughly that we used in a development of Doppelgangster's TITANIC; which due to my aversion to spending hours washing roses by hand was subsequently performed in Experimentica Cardiff and ArtCop  21 Paris sans roses.

How do I know six months have passed?
Because everyone else from ntw summercamp just received their POSTCARD from THEMSELVES!*

How do I know that? Because we're all still connected online!**

Why don't I have mine?? Because I'm writing to you all from Amsterdam!*** (which is like i guess relevant as I'm from Australia). And the reason I'm here is because of NTW SUMMERCAMP...

NTW SUMMERCAMP was a life changing experience...
An opportunity of a lifetime.
And also it was at the Girl Guide HQ for Wales,
which let me tell you has lots of old inappropriate Christian iconography, hunting paraphernalia and swastikas****, AND of course girl guides logos - All of which made for a totally incredible place to spend two weeks with 20 people I'd never met before / would become creative partners with / would glower at in the morning when we hadnt drunk our #coffee before ten am / would spend too many hours or not enough hours with each day / would experiment on new and challenging art with / would teach each other new methods of creative practice / would party with on week days because it is part of the 'process' / would sleep with in a single bed / and in the shower / and on the jumping castle.

HEROES:
All twenty of the artists are absolute legends, but the bad ass Simon Coates who ran the thing is just the best of all for masterminding the event. And special thank you to Michaela Nutt who inspired me to apply!

SOOOOOO:
I'm not in Australia, receiving my postcard from myself***** because I loved summercamp so much I wanted it to last forever and so did some other summercamp crew - so i've been in europe making work with them. We've performed in Cardiff, and Paris, and soon London, Bristol, Glasgow and Aberystwyth****** for more see DOPPELGANGSTER.COM

I'll be back in Wales in 10days time. See you soon NTW!
I guess I'll get my postcard when I eventually do go home to Australia. ;)

PS: This is where I slept every night.
A BED OF MEGAFLIPPIN ROSES. ROSES.

*Haha! We sent these on the final day. Which is ironic because I dont remember that I had contact with anyone from outside of camp for that entire two weeks, let alone a postcard.

** Awwww. But seriously even the people who don't like me seem to be connected so I mean that's valuable right? It seems valuable and not like how I'm still friends with people from primary school on fb just to stalk them and see how weird they are now.

*** Which is like a dirty, adult disney land surrounded by a cross between a library and an ikea.

**** Like for real swastikas and people just carrying on like they're not there. or like they didnt know. but did they? do they? is there a secret society that meets in the subterranean chapel once a month to sacrifice sheep?

***** No idea what I wrote on it. Probably just the word EXCELLENT

****** about as Welsh as ye can get there, I dont expect even you to pronounce it correctly dear reader.

Lovely, thanks for sharing Toby. I got my 'postcard to self' yesterday... not sure what I was thinking... but it mostly came true!