On Sunday the 10th of November I attended Ballet Cymru’s performance of Romeo And Juliet in the Wales Millennium Centre.  Having not had much experience with dance theatre, especially ballet I was looking forward to witnessing something new. The ballet took place in the Weston studio where I found the set visually intriguing, different parts of the stage had rows of chains which enabled the dancers the freedom to move in the space and give the illusion of being hidden. I found this worked exceptionally well in helping to create the image of Romeo trying to disguise himself whilst spying on Juliet during the Capulet party scene. I was also very impressed by the creative directors’ way of using multimedia within the performance as projectors were used in order to create a constantly changing backdrop in order to reflect upon the scene taking place. As having never seen ballet myself before I found this technique beneficial due to my worry of possibly not understanding what was happening as no spoken words are used. It helped me to keep track of what stage of the story we were experiencing. Within the show I found myself enraptured, I was transfixed by the beautiful fluid motion of each individual dancer and applaud the skill in timing and choreography for the group performances. I found myself in awe of each scene, every dance felt that it was exhibited with passion and rehearsed to perfection. You also had this sense of the dancers really throwing themselves into the piece, the emotions flowing through them and this made us feel involved and engaged with them. I was particularly taken with Lydia Arnoux who played Juliets’ nurse and Daisuke Miura who played Mercutio, I felt that both these characters really became their respective roles. Miss Arnoux ensured her facial expressions reflected her character by always appearing overly happy which continued into her flamboyant actions and Mr Miuras’ boyish and cocky mannerisms within his movements I felt really reflected the character of Mercutio well. The delicate dances between Romeo, played by Daniel Morrison, and Juliet, played by Emily Pimm Edwards were flawless and performed with an intimacy and compassion that we would expect from our pair of star-crossed lovers. After seeing this beautiful adaptation, I am really pleased to admit that it’s something I would definitely watch and recommend to anyone. It’s helped me to understand that a story doesn’t have to be told with spoken text but can be delivered using just our bodies to create something beautiful within a space. Ballet Cymru have put on a captivating production that tells one of Shakespeare’s’ greatest tragedies in a beautiful and exciting way. I hope to see more of their work in the future. 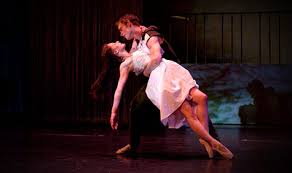