Originally opening in New York in 1938 and even debuting on radio in 1939, the play ‘Our Town’ written by Thornton Wilder is the story of a group of people living in a small town called Grover’s Corners, New Hampshire which is located in the North Eastern part of the United States of America. We follow two families and local town folk in their daily life for the first part between 1901 to 1904 and the second part from 1904 to 1913.

On Saturday the 15th of March I attended Chapter Arts Centre in Canton, Cardiff to watch Everyman Theatre Company present their version of ‘Our Town’. While waiting for the performance to start I flicked through the programme made by the theatre company, I was very impressed by the fact director Ray Thomas travelled to the States in order to research the play further. Instantly I felt the play would have more of an accurate and a touch of personal experience.

Stage manager Geraint Dixon led us through the town with his enjoyable and personal storytelling technique, introducing each character by name and allowing them to invite the audience to experience their world further. By introducing us to himself and each character Geraint was able to make the audience instantly feel as though they were now part of the story, it also gave a sense of realism and in some ways we were able to relate and sympathise with the situations unfolding before us as we were now connected on a personal level. I felt particularly drawn to the characters George Gibbs, played by Siôn Owen, and Emily Webb, played by Amanda Lever. It was refreshing to watch the talent in these two young performers, to take on the roles of a couple who’d been friends for years to then develop the relationship into love, marriage and the heart breaking end to the tale. They had a beautiful chemistry and did an amazing job of portraying that bashful, fumbling awkwardness of two teenagers realizing their feelings. Nicki John who played Mrs Gibbs was another stand out character; I admired the switch from devoted wife and mother to poor lost soul after death. I really empathised with her character after Dr Gibbs, played by Clive Riches, left flowers at her grave and her expression remained emotionless, numb, a far cry from the beginning of the play.

Design consultant Flo Tasker did a great job of utilizing the space in order to create multiple scenes with quick ease in order for the play to continue without too much interference. Something that I felt worked very well was the use of stepladders to simulate George and Emily communicating through their bedroom windows. The set was simplistic but it was enough in order to communicate with the audience as to where the characters were and what was happening. The action wasn’t limited to just the staging area as quite a few times the cast members would enter the scene from the top of the theatre and some situated in the audience, I felt this was a clever move in order to help us feel more engaged and part of the tale itself.

I really enjoyed this Everyman Theatre production of ‘Our Town’, they have done justice to the original tale and I wish them the best of luck with this production further along their tour. 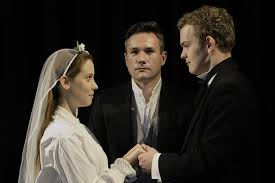