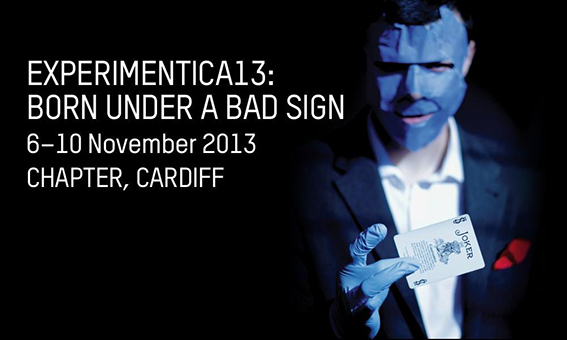 From the 6th of November through to the 10th of November I was fortunate enough to be presented a festival pass for Chapters’ Experimentica13: Born Under A Bad Sign event. This was a showcase for talent from across Wales to introduce performances using a wide variety of media and techniques. As this was the thirteenth Experimentica the theme was of bad luck, I felt this enabled the performers to branch into weird and wonderful creativity levels and produce some quirky and unusual pieces.

On Wednesday the 6th I managed to catch Nick McArthur & Robert Molly Vaughan in The Dancing Plague of 1518. Their piece began by one of the characters running into the restaurant area, standing on a table and explaining to the room the history of the plague, then joined by the other character in the performance. We were then led outside to witness the two characters perform their rendition of the dancing plague. They convulsed and fought, trying to help one another and then turning on each other in a heartbeat. I feel that with costume design and actions the two men portrayed ‘The Plague’ well as plague symptoms come with erratic behaviour which was definitely present within the choreography. However there were parts to the performance I found confusing, such as the bag of white powder sprayed everywhere and the drinking of the bleach. I also felt as this was a plague that took over an entire village it could have been a more effective performance had many more people been involved. This would have created more of the chaotic atmosphere that a dancing plague would create. Personally if I was to create a dancing plague I would have done it in the form of a flash mob within the confines of the chapter restaurant area, therefore the piece would have been much bigger and engaging with its audience. 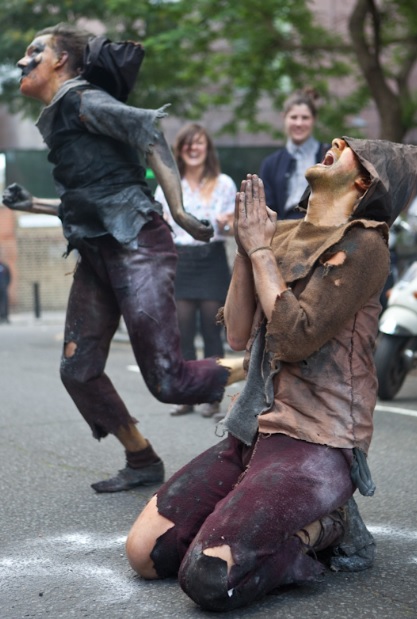 On Thursday the 7th the first performance I witnessed was Cian Donnelly: Strawberry Necklace. Firstly I would like to acknowledge that I am a huge fan of what I like to call ‘weird theatre’ I enjoy seeing the creative ways in which performers can take their audience to the limits and perhaps push boundaries. This performance was very visually appealing; the set was made up of a backdrop with projections of an abandoned house, later changing to a moving face. There was also a number of interesting props, such as a doll with unusual clothing and a plant without roots. The character himself took on an extremely bizarre appearance which I found myself unable to take my eyes off. The only way to describe this performance was creepy, but in the sense that you needed to see more, Cian Donnelly managed to create a monster like character on stage that while you felt disturbed by the content, you couldn’t help but feel sorry for when you heard snippets of his story. I felt frozen to the spot, not really registering what was happening in front of me. Even now after discussion with other audience members we still can’t quite figure out what was happening within this performance and therefore I’m really intrigued to see what Cian Donnelly will be coming out with next. Hopefully there will be more full scale performances in order to expand his creativity to new heights. 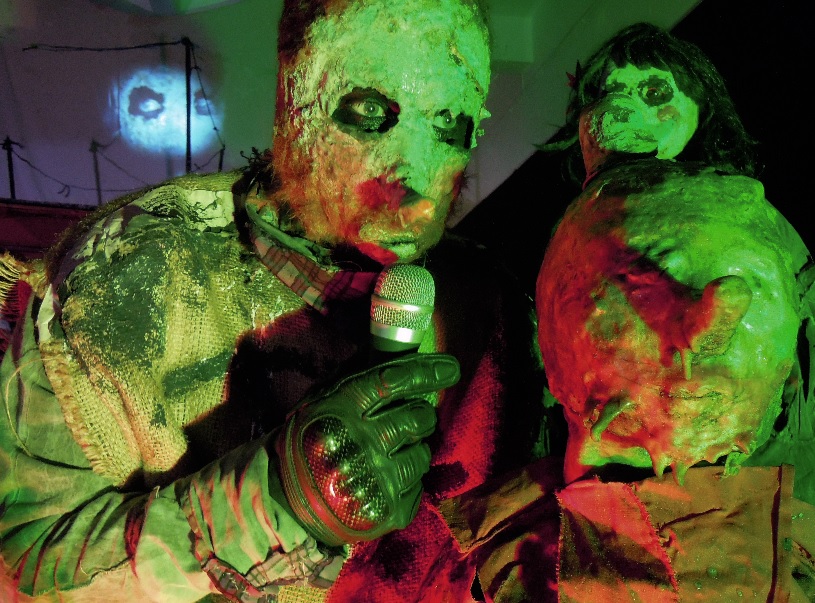 I managed to catch another performance on Thursday evening which was Tim Bromage and his performance based on the book The Hound of the Baskervilles. The only disappointment I felt with this performance was that it was over too soon. I found the entire piece visually appealing, interesting and exciting. I loved how Tim Bromage could go from chatting to the audience in a friendly carefree manner to suddenly and very seriously telling a story on the opposite side of the stage with a singular and intense spotlight. Tim Bromage played with our emotions, taking us from calm to extreme very quickly. I felt the hairs on my neck raise as, I presume, a body underneath a blanket started moving and producing smoke, it was frightening but brilliant. Before we knew it the piece was over and the entire audience was left wanting more as nobody made to move from their seats until prompted by Chapter staff. I can definitely say I will be looking out for Tim Bromages’ work in the future as I feel this was a really well designed and rehearsed piece that ended too quickly. Always leave them wanting more. 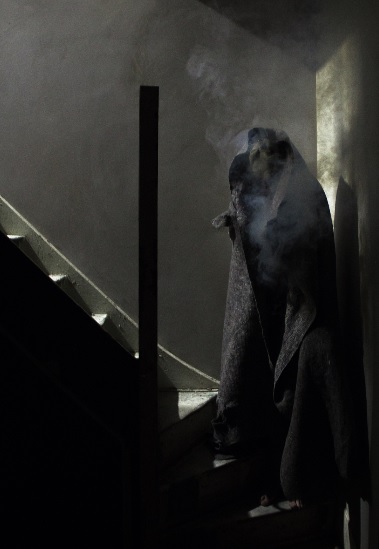 On Friday the 8th I managed to catch some of Holly Davey: If Only I Could Remember. The performance ran from 11am to 6pm and the entire time Holly Davey sat at a desk whilst trying to recapture her thoughts and feelings that had been lost whilst footage of the mugging played on a loop behind her. I chose to attend this piece later in the day so I could witness the recollections from the day. The room in which it took place had a particularly eerie feel to it and you didn’t dare raise your voice above a whisper. Holly Davey was in the centre of the room hunched over a desk and every so often would rise to pin another diary entry to the wall. Just going through the papers you began to feel a sense of compassion; these criminals had stolen something precious, a persons’ innermost thoughts, feelings, ideas and fears. After watching the footage of the mugging I ended up spending some time just watching Holly, who was intensely trying to remember the content and furiously scribble it down before the thought was lost. A very delicate and moving piece I hope that Holly gets recognition for her dedication to recreating her lost memories. 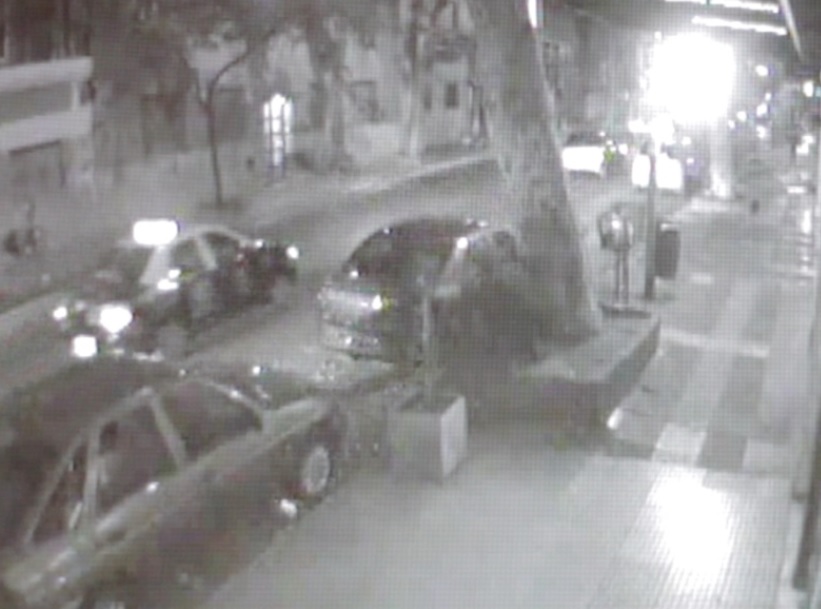 On Saturday the 9th I was fortunate enough, given the turnout, to be able to experience Good Cop Bad Cop: Wylaf Wers, Tawaf Wedy. Originally I was apprehensive when told I would be offered headphones to ease the volume of the performance and that also the doors would need to be locked. However this performance was spectacular, it began with the reading out of an interview of a band, they discuss how the money given by the record label is gone, possibly on drink or drugs. We then heard a live band start playing at the end of the room and at the opposite, behind a thin opaque curtain a beautiful wooden dresser is torn to pieces by a man with a chainsaw. Whilst these were happening the room began to fill with smoke and fog and a little internal panic set in. Whilst calming down I began to think of my own interpretation of this piece. A band with talent is blinded by money, the smoke representing this, which inevitably leads them to a downfall, the beautiful craftsmanship being hacked at and left in destruction and eventually the man with the chainsaw collapsing into the foetal position – the representation of a tumble from the big time to rock bottom. Eventually the doors opened and we were given the option of leaving if we wanted. I however chose to stay, as the smoke had cleared I was able to walk around the space taking in more of the performance that was still happening. I felt this was a really powerful performance and I loved how it was delivered and the way the space was used. 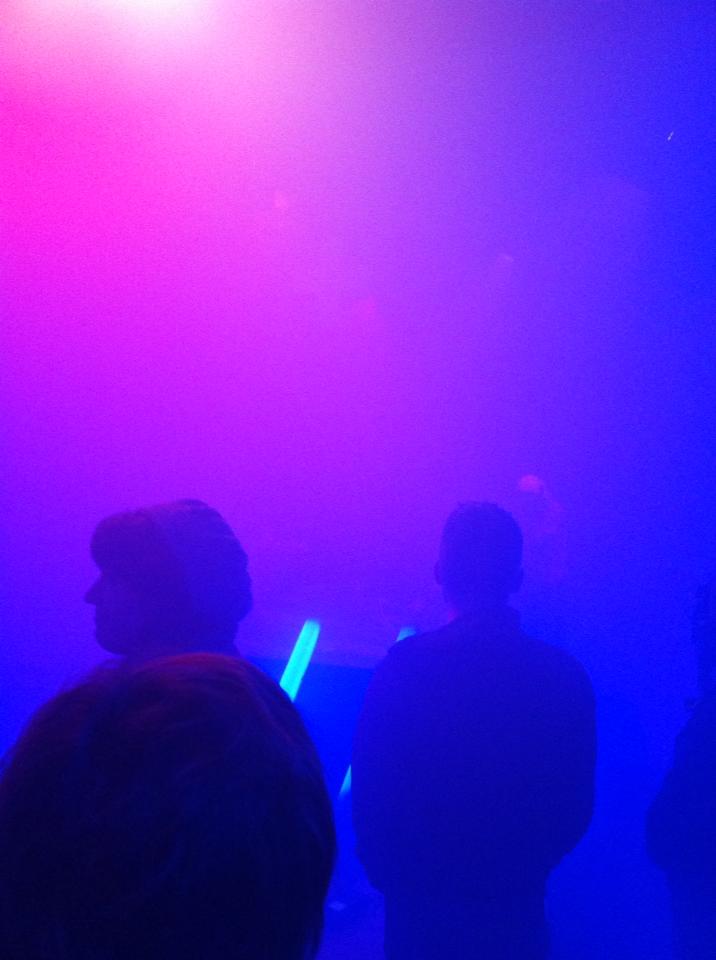 The last performance I caught was on Sunday the 10th and it was Mamoru Iriguchi: One Man Show. Such an unusual performance and exceptionally clever use of multimedia within a piece. Credit is definitely due for the imaginative way the projections we pre-recorded in order to coincide with the live performance taking place. Whilst I admit I didn’t quite fully understand the message of the piece I felt that Mamoru Iriguchi delivered himself in an effective and comedic way that had the audience responding and engaging with him. I really enjoyed how different projections were used on numerous canvas and swapped around, this would have taken a considerable amount of practise and rehearsal to perfect and I found it a very visually appealing part of the performance.

With the festival over and reflecting on the different performances I’ve seen I can say with confidence that I am now a fan of Experimentica and will look forward to next years’. I think this is a fantastic way of talent across Wales to have a platform to let the creativity and imagination go wild and literally experiment with different procedures and tactics in order to create a performance piece that is a reflection of the performer and their artistic tastes. The beauty of Experimentica is that the performance doesn’t have to be ‘understood’ it can just be watched, taken in and interpreted in the viewer’s own way. I hope that all of the people involved are pleased with their outcomes and it’s helped them to understand they are able to try something new within their performances. Experiment!