Having met Joanna the previous week and laughing with her that I wasn’t really a huge fan of dance theatre I was instantly drawn to the idea that this was her third show to round off her piece, I was really intrigued to see her grand finale. I also completely loved the design of the promotional work that was on display, the use of dolls on miniature set really attracted me to want to view the performance.

We arrived at the Sherman and took our seats to find the dance artists, Makiko Aoyama, Jacob Ingram-Dodd, Innpang Ooi and Louise Tanoto already on stage and moving about the space. Once the doors were closed the lights went dim and the performers took their places in a beautifully eerie stance upstage. I remember subconsciously holding my breath while I waited for the show to begin, the constant white noise resonating in my ears, causing the hairs on my neck to stand up, yet I still couldn’t look away from the stage.

Once the performance did began I remember being completely immersed in how skilfully rehearsed every particular movement was carried out. I was also in awe of how the dancers entwined with one another so fluidly and effortlessly. I also feel that so much credit is due to the artists being able to keep a constant rhythm and energy throughout the entire hour long piece; it was apparent and obvious that such work had taken weeks of gruelling rehearsals that managed to produce some excellent work.

I hope Joanna is extremely proud of the beautiful and very different piece of dance theatre that she has created. As I’ve previously stated I am not a huge fan of dance theatre I felt this was something different, the use of props and the performers relations to them felt like a story without words. The only downside was that I felt at times the artists were lost on the stage, for such an intricate piece I felt as though the studio would have played a better venue, the seating and stage adjacent would have really helped to create a more intimate atmosphere. I really enjoyed the performance and will look forward to hearing from Joanna for her future work. 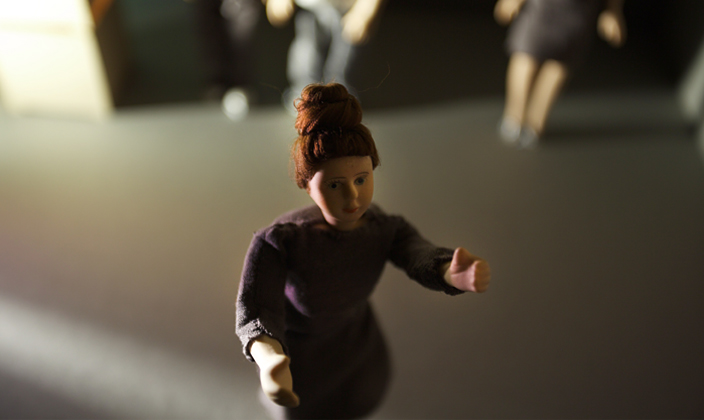