I hope you're well.

I bet you didn't think it would come round this quickly...

I am looking forward to seeing you all on Monday 28th April at 10.30am in the the Dylan Thomas Theatre on Gloucester Place in The Marina, Swansea.

I have received an email from the Travel Company which has booked us for the reading of the show in the DTBirthplace. They have slightly altered the itinerary and are now coming to Swansea on the 9th June, not the 8th.

I have attached the updated itinerary.

I would like to send the souvenir programme to the printers by this weekend.

Consequently, would you be kind enough to check the spelling of your name in the listings and also to proof-read your biographies? Obviously, I have had to change things to fit them in so can you also check I haven't told any lies about you...?

For a variety of reasons, I have had to change the call sheet.

SOME DAYS HAVE CHANGED>

Ignore the last one I sent - this is the active one.

I have attached the schedule for the shows in the summer and who's being called for what and when. I think I have manged to give all the newcomers one day with the schools and then four shows through the summer on top of the rehearsal days. I hope this is OK. It has been a bit confusing and my head is still spinning so apologies of I have made mistakes, please get back to me if I have!

Obviously, I understand that this will almost certainly change but it's a start.

I hate asking this, but if we can be off book for the 11th May then that would be a worry off everyone's minds.

I hope that you are all well. This is the first time I have written to all eight of you, and I am quite excited by that

I have attached a few things for your attention.

A contract, and availability sheet and a script!

Just so that you all know. The first call is April 28th at the Dylan Thomas Theatre for a costume fitting. All the other plans are on the sheets.

Could you fill out the availability sheet for me so that I can work out the rehearsal schedule and performance rota? I am away until the 23rd February but can you return this to me by then as I am VERY busy afterwards.

Could you print off, sign and send me a contract?

Could you print off your script?

Also, Kate - could you send me your biog?

See you all soon,

Piers asked for a copy of the Waldo Song; so I thought I would send it on to all of you!

Remember, do it faster...

Anyway, great feedback from Saturday - Mumbles Traders have asked if we might be free to do it on the evening of May 25th (Sunday) as part of the Mumbles Festival - if I can sort out the details are we free? At present, I will be able to do it, but I am coming back from Prague that morning so who knows...

I have been asked to be part of a documentary that Telesgop are making about the Dylan Thomas centenary. They want to film me doing my thing during the year. They have asked if they can record small sections of the Pub Tour, but only bits that I do - not anyone else.

Would this be a problem if there is a small hand-held camera following us around?

Hi there Nia, Danny and Bob.

Please find attache the new script for Tankers - it is not a new script as it just the same as the old one with a reading added that I will be doing, however it does give you an idea of the plan for the day!

Ni, many thanks for offering coffee and cakes in your house - shall we say 11 am to go through the scenes? We can then walk to The Park and do the route backwards and in situ.

We are schedule to start 2.00ish (I will say about 2.10 to make sure that we have everyone), and we're off. We will finish about 4.00pm in the Park - that will give us time for a packet of chips and then we do the words and scenes only without the walk in The Park from 6.00pm. We should then finish about 7.00pm

Usual pay - is this all ok?

Thank you for responding so quickly to the text message of yesterday evening.

It's great that you can do the 25th of January at such short notice. This one may be quite fun.

From the 23rd to the 25th January there is a Mumbles Beer Fesitval! The landlord of the Park has asked if we will do the tour in three of them on the 25th. I suggested that if we were all available we should start about 3pm as it is a Sunday and it will be still be light for the first poem. We will perform in the Pilot, the Victoria and the Park. The punters will buy their own beer; we are getting a fee from the pubs.

We will do the script as it stands with the following changes.

The introduction and the first pub scenes in the Pilot, and then leave.

The opening poem we will do AFTER the first pub section on the front outside the Pilot (when hopefully the salmon sun is setting over the Beacons).

I will do more history than before on the walk along the front, talking about the Mermaid and the Antelope; lots of references to his sessions in both - no worries for you.

I will do the Return Journey High Street bit on the front outside the Tivoli while they look at Swansea behind me - conjuring up images of the bombing???

Pub Scenes Two will be in the Victoria using the bar.

Before we do Pub Scenes Three - I will do a reading of the opening bit in the pub of his short story The Peaches - Danny will say the words of Uncle Jim, and Nia what the 'two fat women in bright dresses' say. Then we will finish with the UMW scene and the sing-song again (Perhaps Danny should pitch it!!); and the Reverend of course.

If we could meet at midday to walk the route and go through the words. I suspect the performance will take about 90 minutes.

I will send The Peaches to you over the next few days.

This is the job offer - it's a little odd so please don't worry if you'd prefer not to do it.

As you know, we are doing Return Journey for the DT100 celebrations next year. It is both an open-air promenade performance on the streets of Swansea and also a performance in the 'theatre' of the National Waterfront Museum for schools and if the weather is too wet to tread the streets.

As the tour is being offered throughout the summer, it is necessary to have two actors for each role in case the principal actors are ill, get another job or simply bored with it all!

We first did a version of Return Journey two years ago, and this company is our principal cast.

We would like you to consider being one of the replacement actors. This would consist of two days' rehearsal (don't panic, it's really short - and you've learnt most of it for TTBB!!), and one day performing on one of the days from May 11th-May 17th. After that, you would be on standby for any of the remaining shows.

At the moment the schedule is as follows:

Then the first Sat and Sun of each month up to and including September all shows at 10.30am

I hope this is clear - if not please don't hesitate to get in touch.

Attached is a contract for next week. It shows you the money and usual things. Could you sign it and return on Monday?

Also, I am attaching the programme entry which is tiny coz it's on a four page sheet which is going in the envelopes - more about that on Monday. Let me know if you want me to change anything as I have severely cut things.

Hi there-I detected a typo in the old flyer so here's the new one.. 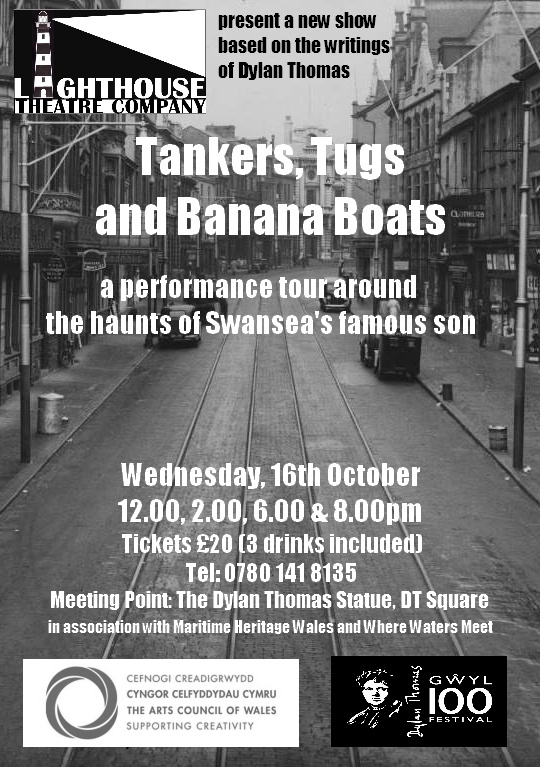 I had a meeting on Monday with the producers and there are some minor changes to the format and script for the Wednesday.

We have four shows still but at

The rehearsals schedule and venue is the same - see you on Oct 14th at 10.00 in the Old People's Welfare Hall in Mumbles. I'll give you the contracts then.

Can I ask you to send me your bank details (you will get paid on the weekend after the show), your biog and CV, if you have not already done so, so I can put you on our website. And remember to dig out your forties cossies (a disheveled suit, mac and trilby will do for you Danny). 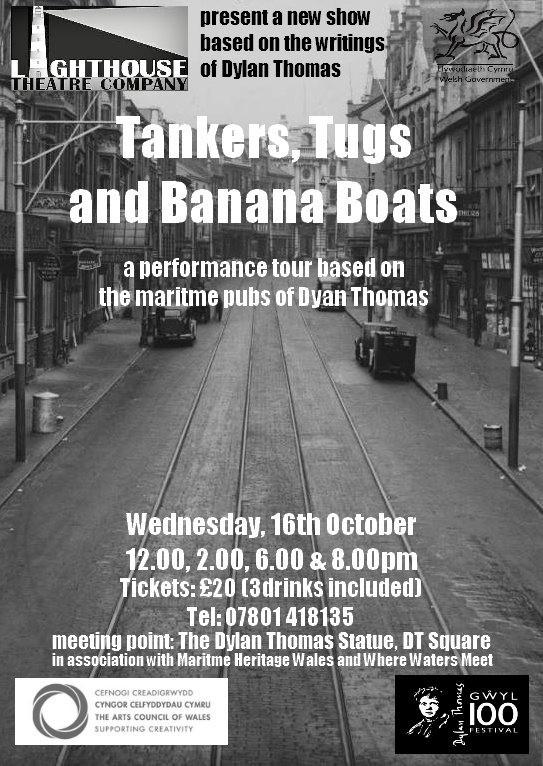 this is the working draft for Tankers Tugs and Banana Boats on the 16th October. I would apppreciate any comments including the order of he scenes and the pubs.

Happy reading over the weekend.

I am off to make some fishcakes...

We can presumably attach things to this wall - I know that you have sent the stuff to Son but do you want to give it a go?

Then I will have a means of sending the script directly to you.

Hi Nia, Did you get my email regarding the pub walks in the autumn? Ade x

Congratulations ona  lovely review in the paper! Sorry, I missed it. Ade x

Thanks - I need them - especially at this time of year!

Mrs TJ...How are you. I like this site....can't believe I haven't joined sooner xx