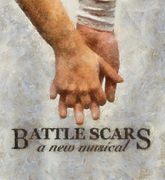 Still struggling to adjust following the disappearance of her mother, Lily Prewitt finds herself sectioned into a mental health unit for teenagers. As her life begins to spiral out of control, she will rely on the relationships she makes with her fellow inpatients to ultimately decide her future. ‘Battle Scars: A New Musical’ explores mental health issues, including depression, self-harm and anorexia, with a brutal honesty, in the hopes of bringing the discussion of how these afflictions can affect young people to the forefront.

Following its original run last March by Cardiff University’s Act One Drama Society, the production now returns in November to the YMCA Theatre, Roath, along with its entire original cast comprised of Cardiff University students and alumni, and a musical director and band from the Royal Welsh College of Music & Drama.

Battle Scars is the debut production of ALRIGHT Theatre, and showcases the talents of young artists in Cardiff, from actors and musicians to writers and technicians. Combining an electrifying pop/rock score and a script brimming with humour and heart, the show provides a truly unique theatrical experience that promises to leave audiences stunned.

RSVP for Battle Scars: A New Musical to add comments!