Mother Courage and Her Children

MOTHER COURAGE AND HER CHILDREN

in a translation by John Willett

National Theatre Wales returns to its birthplace in the south Wales valleys for the first production in its fifth season - a bold, anarchic  new version of Bertolt Brecht’s 1939 anti-war play performed in and around the Merthyr Labour Club.

Mother Courage has been described as the greatest play of the twentieth century. Performed by a cast of nine great Welsh actresses, in the gutsy English of the South Wales Valleys, and in the context of our own unending wars, this will be a defiantly twenty-first century version.

Tickets are on sale now

RSVP for Mother Courage and Her Children to add comments!

Comment by Emma-Jayne John on May 22, 2015 at 10:10
I went to see Mother Courage and Her Children last night, and just had to leave a comment.
I'm an Actress originally from Rhondda but now live in London and managed to catch the show while I'm at home, and I am so glad I did. I thought the production was stunning, in every aspect. The performances of these Welsh actresses was so real and believable, and they really drew me in to their world.
The scenography took me aback, with the use of the lights, televisions, scaffold and even the bar! I loved the "valley" feel to it - even the dancing which we, as the audience, could participate in.
I really loved that local women took part - theatre is for everyone and the valleys has a sense of community that I've never felt anywhere else, so to feel that in the performance was heartwarming.
I brought my Mam along, and the only theatre she's ever seen is the conventional sort - she was blown away.
I've studied the play before but seeing a version that I could really relate to has made me think about the play in a new light.
Sorry for the waffling - IM finding it hard to articulate my thoughts - all I'll say is Thank you NTW for this great performance!

I first sang in  the trailor  for mother courage and then was asked to be in the chorus line i happily accepted and i am thoroughly enjoying this new experience, it was just what i've been looking for in the change of my career.

The story of mother courage is very close to my heart as i have had experience through my life of having a brother at war and never knowing is he going to get hurt and will he ever come home, then watching my poor mother's face when some horrible news comes on the tv or radio about boys being injured or even killed and then trying to realise what pain a mother goes through just like mother courage.

After seeing the actresses who are all extremely talented and getting to know the cast has been thrilling the more we see each other and the more we all take time to talk has really opened my eyes to how we are all just doing a job and we all live the same type of lives with our family's and friends, and meeting new people and friends too. I hope we will all keep in touch in some way or other.

Mother Courage is a heart felt story with lots of twists and turns that you really don't know what to feel, do you feel sorry for her, do you hate her for the things she's done, it's very gripping and i find that being a mother you can start to relate to her in some ways to the struggles and worry's that she goes through just like we do in life with our own children.

I cannot wait for the opening night of the full show and i am so glad to say i'm part of this tremendous play and hope to do more with the National Theatre of Wales company in the future.

Well Done cast, production team, writers and composers and everyone else involved your doing a brilliant job. 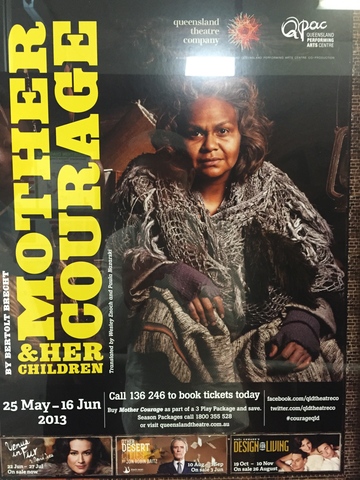 A Postcard From Queensland.

Cannot wait to see this!! One of my all time fav plays :)

Day 1 of rehearsals for Mother Courage and the Merthyr Labour Club is packed with cast, crew and creatives. There is a buzz in the air, everyone is excited. I am here as I going to be exploring the education side of Mother Courage.

After introductions the tables and chairs are pushed aside and Jo Fong, Movement Director gets us all up on our feet (nobody is getting out of this!). We warm up our bodies and  shimmy around the dancefloor - after all there is a mirror-ball above us! We recall the songs and dance routines from our young 17 year old selves and move about as if time had stood still.

This is no ordinary production of Mother Courage with its all-female cast. It is a play within a play and as the audience arrive for a night out, so do our characters. It is a mash-up of old and new.

With original music by Dafydd James you might think you have heard these songs somewhere before. There is a feeling of familiarity about them.

This Mother Courage is of the past but also feels very relevant to the here and now.

The play is set during the Thirty Years War but what does it speak to us about today given our backdrop to the wars in Iraq and Afghanistan?

“War is hell,” so General Sherman is often quoted. But sometimes, it’s the waiting around between the battles that’s the tough part. (as quoted in Walesonline)

How does it affect the women who are left behind as men from our communities go to war?

What about Mother Courage? How does she survive as she waits around between battles?

What Brecht wanted and what National Theatre Wales want us to do, is to have a great night out, be entertained and to think about the world in which we live in.

What questions will this National Theatre of Wales production raise for you?

Come and find out. I know it is going to be a great night.