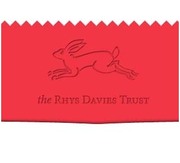 This new play about writer Rhys Davies sees writer/director D.J. Britton join forces with BAFTA-winning actor Richard Elfyn, following their success in 2012 with The Wizard the Goat and the Man Who Won the War, along with Welsh favourite Eiry Thomas. The high-energy play is set in the late 1960s and looks at a pivotal point in the friendship between Rhys Davies and novelist Anna Kavan, both of whom are living a life of self-invention, in which secrets, sexuality and deep questions of personal identity lurk constantly in the shadows.