The one regret my father had while growing up in Dinas was that he did not pay much attention to the stories that were being told. The stories he did tell me were fascinating to the say the least, especially about his uncle Gwillym Pen Pwyll, a street singer, who had a permanent pitch outside the old Tonypandy Empire that he used to guard jealously. He also sang outside the Royal Theatre, St. Mary St, Cardiff and the Philarmonic Hall, Cardiff. The stories he told my father, his brothers, and sisters deserve a book of their own. He told them that he knew people who remembered the young Charlie Chaplin and Stan Laurel performing in Cardiff before they became famous.

Gwillym was a  tall, broad shouldered man and had a magnificent beard that came half-way down his chest. After coming to my father's home on Dinas Road after singing on a Saturday night, his pockets would be full of coins and he would give money to the children, Many a happy hour would be spent with him before he went to the pub and told my father that the women could fight better than the men when there was trouble.

Gwillym was an accomplished lyric tenor and his repertoire included Welsh airs,Italian arias, and English ballads. The Death of Nelson seems to have been his favourite. Outside the Tonypandy Empire, Gwillym would re-enact the order to fire cannons on the deck of HMS Victory. "Silence! Cast loose your gun!Take out your tampion! Prime! Point your gun! Fire! Worm and sponge. This went on for a few minutes with the orders and then, after making a few jokes, he would sing the opening lines: "O'er Nelson's tomb, with silent grief opprest, Britannia mourns her hero! now at rest: But those bright laurels will not fade with years, Whose leaves are watered by a nation's tears,"

I wonder what Gwillym would have made of the talent shows on today's television? The photograph below is of the TynyCymmer Arms, Dinas. 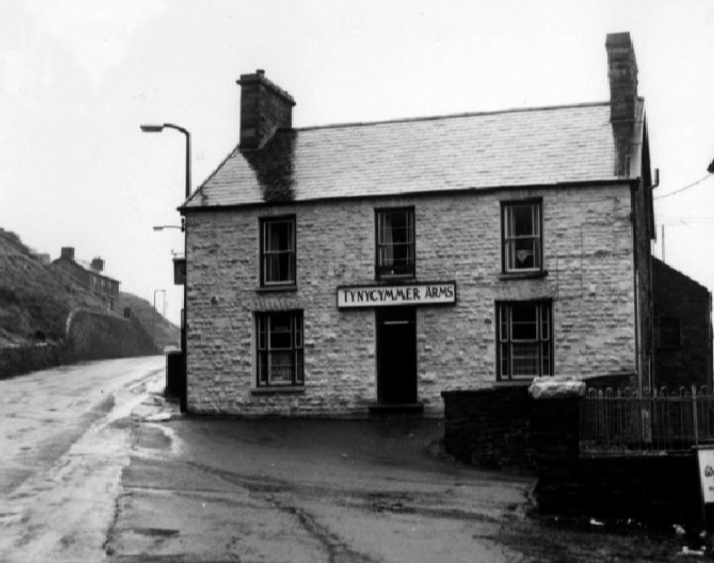