My name's Maeve, and am generally quite a silly girl, shambling my way through life. I've just become part of TEAM panel however and am very excited, so it could perhaps be said that some of these shambles have been in quite an enjoyable direction. My involvement with TEAM thus far has involved rambling out some rather ridiculous stories at three of it's Word4Word events, pretending to be a duck at one Stories of the Street event and writing a short piece about angels and flapjacks and Pontypridd for another, getting in a massive internet texty fight for the TEAM Script Swap event ("no way Bruce! It's over, deal! I saw you like, licking Mag the Slag's face in sweatros!) and also crying my eyes out at EVERY National Theatre of Wales show I've seen as part of the free TEAM night showings. They never fail to make me embarassingly proud of my country and my people and how much we can overcome. Am also constantly impressed by the complementary supplies of olives / wine at those things. Emosh.

So we've been asked to include some kind of creative piece in this blog, and I'm actually temporarily separated from my notebook (went to a really fab Presentation training day with this lovely lady from Manchester today at the National Theatre Wales Office and left it there like a bufoon!) however have found it within myself to compose some insect weirdness. So, here it is! :

Sometimes, I think I’d really like to be an ant.

It’s not even a rare happening, it’s not like every once in a while, when I’m in Geneva, researching clock parts and Swiss chocolate (obviously a freak occurrence for any time phobic vegan) I pause from lifting up a lever mechanised minute hand with one of my own and snapping transatlantic dairy milk bars with the other and wonder, idly, bizarrely, what it’d be like to mentally inhabit one of our little multi limbed insect friends, it’s every single day!

In terms of thought normality it’s right up there with, “oh no, where did I put my notebook?” and “shit! I’ve lost my phone! Oh no it’s just behind my makeup case” and of course, “cornflakes! What on EARTH.” So you understand, it’s not one of those mild ideas that you can toy with and then discard, it’s a constant, it’s always on the periphery, furred mandibles are a constant haunt with high pitched shrieking shrills of, “hahaha! You’ll never have what we have, you’ll never know what we know, stay in your skin and scream and fester whilst we prosper, we muster, we grow!”

It’s envy, I think, and bitterness, to  think of their little black bodied light scuttling lives, weaving in and out of the darkened pavement cracks, jumping into the plant pots, climbing up green leaves to touch pollen and come closer to the sunshine whilst being so afraid of it, doing everything that we do without the added complication of mortgages and rent rates and university degrees and cvs and self hatred and car crashes and rainy Monday mornings when you don’t quite have the heart to go to Debenhams but you can’t face the dripping of the kitchen tap, dripping like its letting in the storm from outside to rot out your insides.

Okay, maybe I’m being a little bit unfair. They’re cute, those ants. They’re sweet. They’re just a little bit frantic. They just don’t know what they’re doing, or where they’re going, or why, and they can’t stop falling all fucking over each other.

No ones going to STAMP on me

There we are! Have also drawn a (quite rudimentary) picture of an ant, however could not get my scanner to work, so have taken a photo of it where it's speech bubble is all back to front: 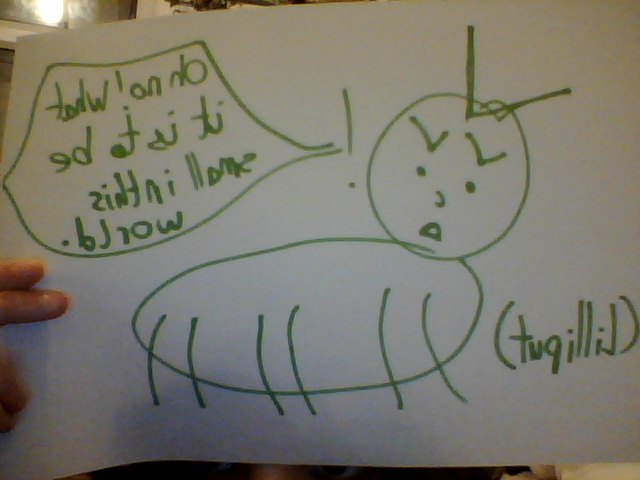