Hi a link to an interesting Blog on the Guardian website . If you scroll down it also has a link to another blog discussing the National (England) poster designs.
http://www.guardian.co.uk/stage/theatreblog/2009/nov/26/stage-theat...

http://www.barbican.org.uk/bite10/
I don't know if what's there now is similar to when you posted the link, but the current page has a very nice range of images. A lot of the most striking ones though don't seem to be 'stage photography', which is what the Guardian article was talking about ("Stage photography of the sort that accompanies reviews or blogs is usually sourced in two ways).That's what I was talking about in my previous posts.

Some of the ones I really like are these:

None of those are 'stage photography'. All of them are carefully set up and photographed, possibly with input from a number of people including the marketing department and director. There was a lot of previsualization involved, the last one they knew the pose to do so they could Photoshop the fire in later. (I like the shot but they could have used an orange bulb as a stand in for the flame, or at least set a light coming from the appropriate direction ;-)

Those all happen to be studio shots but I don't think good marketing images need to be.

They also all have plenty of blank space which would make it easy to incorporate them into designs for posters etc. which Tom rightly says are important. I do quite a bit of work that I know is going to be incorporated into graphic design, posters, brochures, websites and the like so I take a lot of pictures with that in mind. For example I might have a lot of empty space to one side of the main focus, or a very out of focus background to allow space to place text.

I occasionally do some graphic design so I see this from both sides. If a photo is good in and of itself as a photo then it's typically 'complete' in some sense, which means there's nowhere to put additional elements and it might not be very good to use in a design. On the other hand if a photo looks like it's missing something then it can be great as an element, because you can complete it with a text or logo.

For example here are two images I took for the Newport University at their Caerleon Campus. 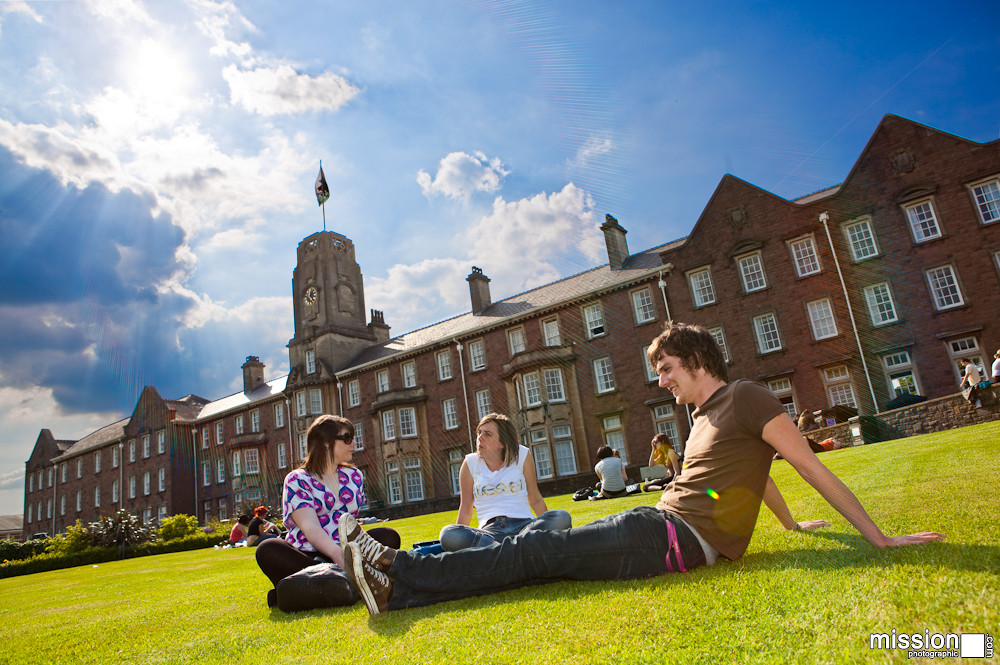 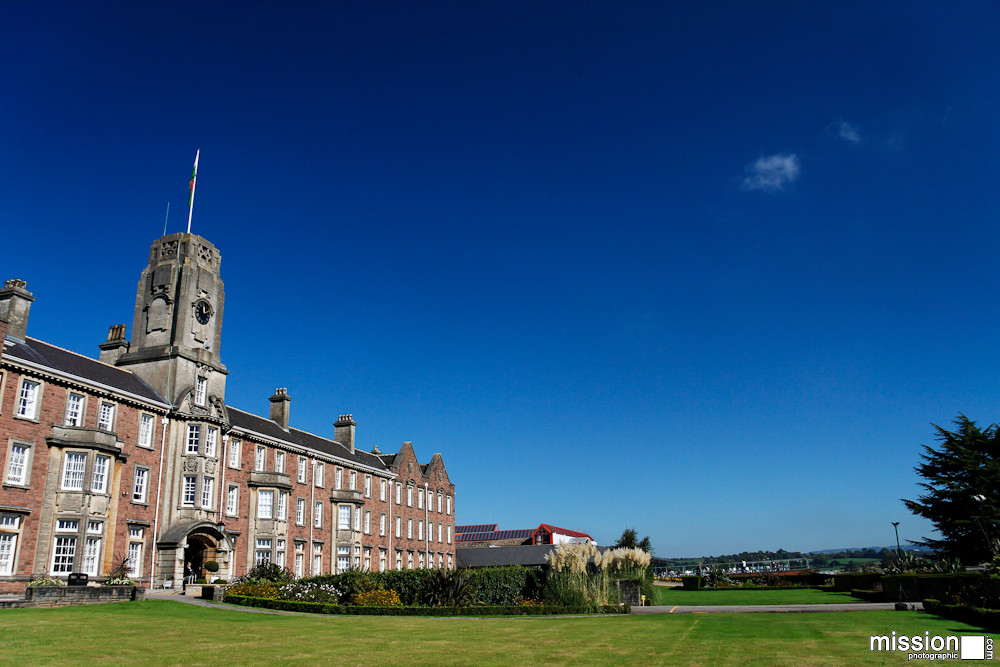 The first one is probably the more complete photo on its own. I took the second one with the intention of their design department being able to use the clear sky to overlay stuff, and it ended up getting used as a double page spread as the intro to their prospectus a couple of years back. It was also suitable for that as there is nothing important along a vertical line down its middle, where the fold of the book is.

So I think we're talking about two different types of photography, which are often confused:

1) 'Stage photography' let's call it, where a photographer goes along and basically records their interpretation of what happens during a performance. This typically requires no extra work on the part of the people making the production, but the photographer is somewhat limited in what they can do. (As Nikki points out if the photographer is making money from selling a certain sort of photo then that's the sort they're going to take. Personally I wouldn't be too happy with performance related pay like that!) Also the results may or may not be useful for what the production would like to use them for.

These kinds of photos can perfect for newspapers etc. because if they're writing a review they want a photo of what they're actually reviewing, quite possibly even that specific performance.

2) Promo photography, where the photos are part of a deliberate thinking process and marketing campaign about how to present the production to the audience. This can be more of a collaborative process, the photographer would actually interact with the people in the photos and construct the images, and more thought would be given to how they're going to be used.


Both kinds of photos are valuable I think and I personally enjoy doing both types. The problem comes when people expect one sort to replace the other. I think this mostly arises when people try to substitute (1) for (2) because it's simply less hassle for them and they might not have the time or budget to do (2) properly, or maybe they just don't realise there's a difference.

Comment by Jorge Lizalde on March 16, 2010 at 22:19
I do agree with Mei that photographers normally take really good creative pictures from different angles, perspectives, close ups, etc... but the final decision is in the hands of producers, editors and designers, finishing mainly with unhappy photographers that disagree with the publications. Also some in house photographers are not paid and they make their income with the number of prints sold. Furthermore, the photographer is invited for just one run so close ups it is a way to gather more costumers as normally there are more performances on stage that set, lighting and costume designers. The best way as you say Nikki, it is always to brief the photographer. Here you can find some examples of my portfolio where I was brief by designers http://www.jorgelizalde.co.uk as you can see not many close ups.

Comment by Nikki Joseph on December 1, 2009 at 23:55
I do want to point out even with meis fantastic arguement that sometimes it is the photographer too. i have worked for a lot of small companies since graduating so have done the photography myself which means i do a lot of wide shots unless it is an intimate scene.

on the other hand whilst i was at college i had a lot of problems with out resident photographer. although a lot of really beautiful photos where produced as a designer i had very little i could contribute to my portfolio as they were all tight shots of the actors. in the end i started briefing the photographer before he came to shoot the dress rehersals of any of my shows to make sure he was aware of the importance of the "whole picture" that a director, designer, lighting designer team have worked so hard to create and to make sure that as much as possible was portrayed in his pictures. even though after this conversation i had some brilliant shots that really make my portfolio come alive i know that some of my peers in my class weren't so lucky and would only have 3 or 4 picture out of 400 that portrayed a full picture.

i dont know if it was because the in house photographer only did theatrical photography and felt that the actors were the only thing important or because he felt he could gain more revenue from the close up shots of the performers as he sold his prints back to the students.

either way the relationship between the production students and the in hpouse photographer was always strained. with even production tutors becoming frustrated by his work as it was no good to them either for their own marketing of their course.

Comment by Guy O'Donnell on December 1, 2009 at 18:44
Hi Mei its from the blog post responses, you have to scroll down a bit , I have posted it below Guy


think it's a fair point... It reminded me of an article about posters at the National which I came across recently: http://encoretheatremagazine.blogspot.com/2006/10/posters-at-nation...

Interestingly, none of the publicity shots for Bite10 on the Barbican website follows the "single headshot" rule: http://www.barbican.org.uk/bite10/ even though the pictures displayed are fairly small. It's hard not to conclude that this stems from a different approach to theatre and a different idea about what people want to see when they go to the theatre than, say, the National or the Guardian picture editors.

Comment by Tom Beardshaw on December 1, 2009 at 15:40
Tend to agree with Mei here... photography used within a marketing context is subject to the marketing agenda... so has to use the strongest selling points (well known cast etc) and also has to work within the visual layout of a poster etc.. with space to place copy, logos etc. I guess it's a discipline for photographers working within theatre (with not much room for creative expression), but it's not the same as focussing on creating beautiful photographic art out of theatrical subjects.

Comment by Mei Lewis on November 29, 2009 at 15:54
The Guardian writer seems to be arguing for more variety and thought from photographers, and an attempt to capture the essence of the show rather than simply some nice photos of the main protagonists.

But he's blaming the wrong people. It's the editors of newspapers/websites and sometimes the marketing departments of theatres that choose what images are used. The photographer might submit fantastic, creative shots that really capture the atmosphere of an event, but most of the time what will actually get used is the same boring style of shot, that shows what stars are in the production. The writer should know that!!!!

From the examples he cites I'd agree with him that the shot of Helen Mirren is uninformative and fairly generic, and the photos from the production of The Trial are far more interesting and probably give a much better idea of what it's like to be an audience member.


"...in terms of our semiotics, would it not be better if photographers worked to convey exciting whole-stage pictures rather than illustrating two hours of drama with a single celebrity headshot?"

Helen Mirren is a draw, so they use a picture of her to sell the production to audiences, or in the publications' case, to make the reader interested in what they're writing.

I used to do a lot of live music photography for The Big Issue when they had an office in Cardiff, and after a few assignments I realised that whatever photos I took, the one that always got used would almost always be a fairly close shot of the performer or the main person in the band, ideally showing them singing into a microphone and their hands playing their instrument (if they had one).

Another point is that you can only shoot what is there. If set designs aren't that interesting or individual then it's hard to make the photos be. The Trial set looks great, the Helen Mirren production much less so probably.


"..it is increasingly impossible to show a whole production from a single photograph..."

Maybe. The right photo can show the essence of what's going on, and I think that's often good enough.

In any case there is far less need to use just a single photo than ever before. On the web it's easy to use several images or a gallery, and get a rounded picture of what's going on. It's often possible to take photos that could never work alone, but as part of a collection work well. I love diptychs, triptychs, sequences and so on.