Review: Love Steals Us From Loneliness

Hello, my name is Jade Maiden and I am part of the young critic scheme. I am currently in education, doing my A Levels at Bryntirion Comprehensive School and this is my review of the play, Love Steals Us From Loneliness.
It's a true, but harsh reality.
Can Love really steal us from loneliness? Can it sweep us off our feet and carry us in to the clouds? This play touches on the subjects no one wants to talk about, but people need to realise are going on. It shows the outsiders of Bridgend how the teenagers of this town felt about the deaths going on around them, and shows the feelings and emotions of the teenage mind as a whole. Gary Owen is able to do this in a humorous, but dignified way. 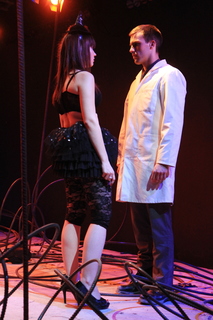 The play kicked off with the karaoke number - “Please don't let me be misunderstood” - from Scott (Mark Sumner). And, to intensify the introduction, Catrin (Katie Elin-Salt) burst through the crowd and out of the room, only to have Scott run after her. The first scene was set around the characters of Catrin and Scott. They shared a drink from Scott's briefcase of coloured vodka, before they talked about the insecurity's that teenagers have, but don't talk about; and how they all hope that things will end up good in the end. The next scene starts with the chorus singing a number of karaoke songs before Catrin sings her own, linking it back in to the main play, “You always hurt the ones you love”. This scene is focused on the death of a character we never get to meet, but hear so much about, Lee Davies. New theatrical talent popped up in front of us in the form of Remy Beasley, Matthew Trevannion and Nia Roberts. Lee's death provoked all the raw emotions young people feel within their lives – love, anger, hate, angst, love. It basis itself on how the characters deal with the death and how in the end, they all find a way to get over it. The last scene takes us back to the ending of the first and to the loved up couple of Catrin and Scott.

Hobo's completed the surroundings for the play and it easily tied in to the performance, helping the atmosphere really come in to it's own. The hardships of teenagers tie in to the production brilliantly, really showing the life of a teenager in Bridgend; the going off to university stage is always the biggest hurdle in a relationship and one, many think they can handle, but normally don't. The show easily addresses how childish a person can be, but how the deception involved isn't easily recognised, and it's the ones that run after you that are worth it in the long run.

The whole performance ties in to the ways people can get over the death of a friend, relative or loved one, and in the end, their only dead once they've forgotten. If held on to, they can be with you for the rest of your life, but sometimes, you have to let go to continue with that life. Whether it's moving out of town, having a baby, getting a career, forgiving yourself, it all helps in the healing process that will take years, but will eventually come through in the end.

It was definitely a play everyone in Bridgend could relate to, and showed the pain of the portrayed town in the media. Gary Owen did a brilliant job at writing a play that doesn't touch the subject of the suicides within the past few years, but still shows the emotions and feelings of the teenage mind on what happens when a young person dies. Having been raised and bred in Bridgend, the play really touched me and was really easy to relate to, with the great theatrical talent, the play, in my mind, had been a successful venture that I enjoyed very much.

Comment by Rachel Williams on October 25, 2010 at 22:30
Hi, really enjoyed this review, the way you explore the depth and emotions of the play. Loved the use of pictures of the play too, particularly as you captured the characters emotions perfectly.

Comment by carmen medway-stephens on October 25, 2010 at 19:22
Very thorough Review - looks like the scheme is going well

Comment by Guy O'Donnell on October 25, 2010 at 5:38
Hi Jade , you appear to have picked up on the emotions portrayed in the play and give some really interesting personal responses.
Your eye photo is brilliant for a Young Critic, very Big Brother!
Guy