National Theatre Wales have again pulled out the stops to create another piece of original yet extraordinary theatre, exploring another part of Welsh history.  Join in on the taxi-ride of a life time and enter a world which is at once alive and burgeoning but also full of history and personal stories,

Soul Exchange is a site specific performance but not in the conventional sense where it has simply been taken out of the theatre ‘space’. It is built around Butetown, celebrating the multi-cultural history and community that grew around the beginnings of the coal export industry. The performance is split into two parts, the taxi ride and the last part at the Coal Exchange.

As soon as the audience queue to begin the Soul Exchange journey you enter its world: the dock ticket master sending you through, the passport photo’s where you absolutely cannot smile and the photographer kicks up a fuss if you so much as smirk (which is inherently funny: it is human nature to smile when told not to). A choir sings in the background and characters interact with the audience as they wait; grandmothers gossiping about their grandsons and offering to come around later for cups of tea, dock workers milling around and street sellers bartering their wares. Heading out to the taxis you pass a group huddled around a burning oil drum singing and banging away.

The taxi journey can be taken two ways; one is that the audience becomes the main character on the journey, second is that the audience is with the main character in the taxi following his movements. You are certainly drawn into the situation, experiencing everything as he would. The soon to be dad is in search of his own father and roots. Armed with a name and address that no longer exists, he and the taxi driver move from place to place picking up clues as to where he might find his father. As the audience listens to the actor’s on CD we are driven around Butetown passing by each stage of the journey: the community centre, church, tower blocks, and last of all the Coal Exchange. Amongst the streets the communities of past and present collide, with a 1920s/30s guitarist opposite a 90s hooded youth playing music from the car radio. A 70’s working class young couple arguing and an early century fruit and veg seller grace the streets; trilby wearing, Delboy style business men work their charm alongside modern ballet and street dancers. The young man finally finds his father at the church where secrets are revealed. Christian grandmothers christened mixed race children behind their father’s backs, so that they would not grow up with Muslim names; the man’s father Abdi Mahmood had become Peter Watkins. Yet it is the priest that solves the cryptic, concerning answers of the Vera and the community and delivers the bad news: the recent funeral had been his father’s funeral.

The Coal Exchange is the location of the wake, where there is further interaction between the audience and the characters of Tiger Bay. They are mourning the loss the father had been nicknamed Tiger Bay: the play places him as the community hub, its royalty and family - he is the community father as well as his family. Making him a representation of what community means, his legitimate children speak of his desire to make money but was always willing to help others. Tiger Bay is the location of the community, as well as being the community. I felt there were the odd moments where the theme of community became somewhat moralistic, driving home a little too much just how important community and family is to us all and whilst we are celebrating the history of what is now Butetown, without the coal industry it is not the community it was.

Audience interaction is crucial, without it the impact of the surroundings, the scenes played out on CD is lessened. We make up the vast proportion of the ‘community’, and splitting up groups to go into the taxis is a shrewd move, creating the ‘ah there you are’ moment when reunited – again enhancing the togetherness. The dance at the end was brilliant, encouraging the audience to dance to the ‘Butetown theme’ Tiger’s favourite song. They were simple steps but for those of us who didn’t know them it was very entertaining trying to keep up and not step on your neighbours toes, laughing with them when you did, it gave an enjoyable end to the evening. 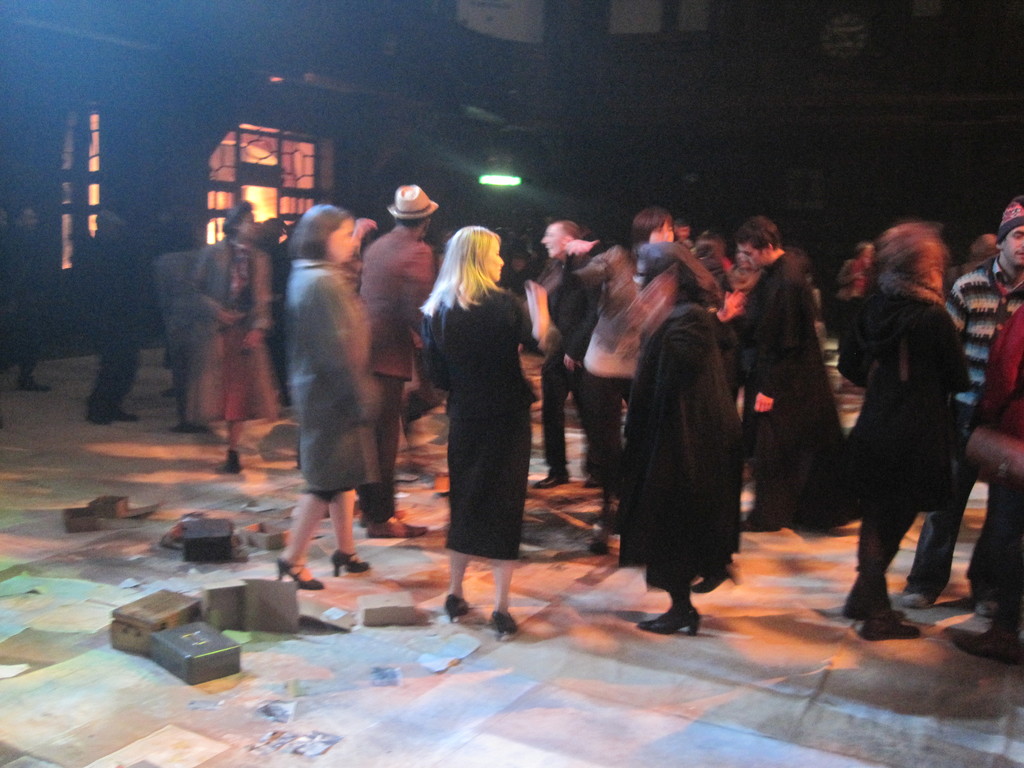 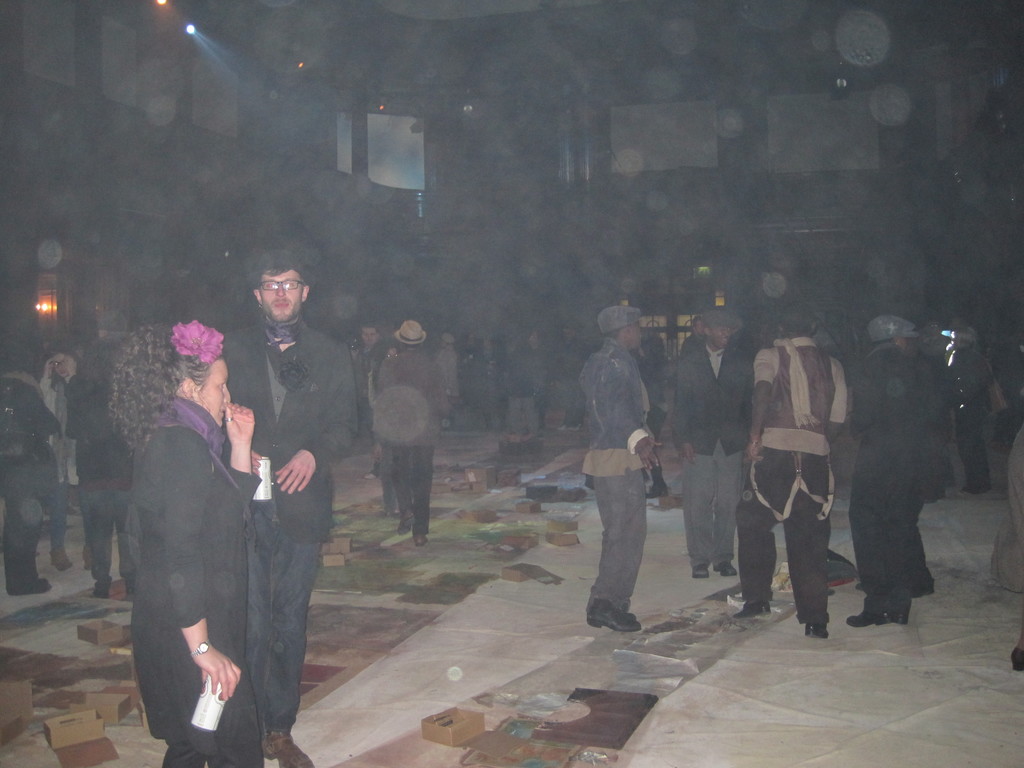 Just some of the dancing at the end!

As we passed through the different elements the enormity of the organisation needed to produce a play on this scale was evident. The crew did a fantastic job as every stage of the journey was well structured and none of the audience looked lost or confused, we were given props and instructions where appropriate - a box of the main characters keepsakes in the taxi; photo’s, newspaper, a button with cloth and pieces of metal and then the letter Abdi Mahmood left to his lost son as we entered the Coal Exchange. The audience get to keep the boarding pass and the letter, keepsakes of our own of an excellently executed play and of a shared moment in time. 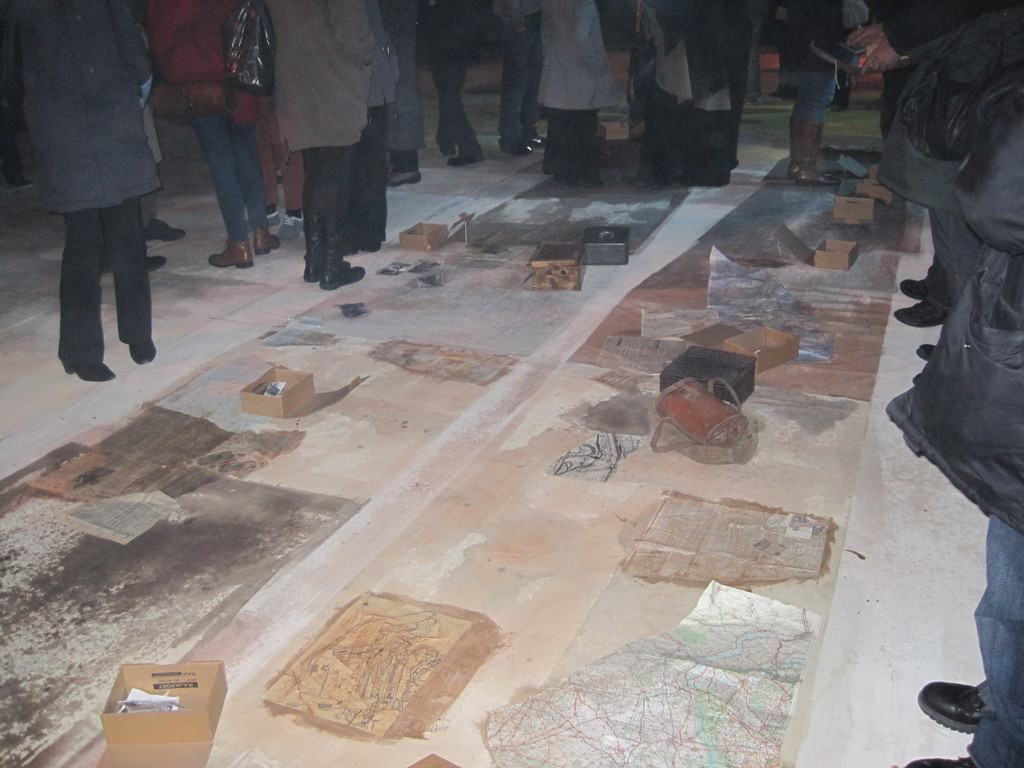 The boxes given to us for the taxi ride - placed on a very large man painted on the floor covered with maps, newspaper clippings and photo's.

There are many creative elements to the play as it uses certain conventions of Radio and filmic techniques, using original and popular music. The audience has work hard to incorporate every element into the experience, as the dialogue and background music play out of the stereo the world outside whizzes by in a split second, much like it does in a film. You have to keep up, there is no clock watching or drifting off, every second is important.

One thing I was unsure how to react to was the length of the taxi ride as several of the street scenes were seen repeatedly. I recognise that Butetown is only a small area in which to and to get to the Coal Exchange some steps needed to be retraced and the CD was also a certain length but I felt that seeing something two or even three times was unnecessary. Yet stopping each taxi and using more of the street scenes would have required far more logistics and broken up the dialogue on the CD.

As a play it is reliant on the history of Butetown although changing the history and the location would allow the play to fit into any other town or area of Cardiff, Wales or even the world. Soul Exchange is a fantastic feat, not only logistically but creatively and as a play alone. The next performance of the show is tonight and I look forward to the next NTW production with anticipation.

Pictures taken by myself.

Comment by Guy O'Donnell on January 28, 2011 at 17:20
Brilliant review Rachel , wonderful insight into the play and the production elements required to create it.

As we move through this uncharted territory over the coming weeks & months, our connection & conversation with our community has never been more important. Lorne's 'hello' is up on the Community, where you can share your thoughts & connect with us https://buff.ly/33NSZce pic.twitter.com/Sn6OMancmQ

As we move through this uncharted territory over the coming weeks & months, our connection & conversation with our community has never been more important. Lorne's 'hello' is up on the Community, where you can share your thoughts & connect with us https://buff.ly/33NSZce  pic.twitter.com/Sn6OMancmQ

“The best theatre has always been made by passionate people trying to do a thing outside of their comfort zone” A curious hello from our new Artistic Director, Lorne @lorne_ntw, on #WorldTheatreDay https://buff.ly/2xy0bwM pic.twitter.com/YOEqQKNOkX

“The best theatre has always been made by passionate people trying to do a thing outside of their comfort zone” A curious hello from our new Artistic Director, Lorne @lorne_ntw, on #WorldTheatreDay https://buff.ly/2xy0bwM  pic.twitter.com/YOEqQKNOkX