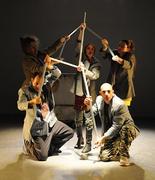 Participants in this laboratory lead by Ruth Kanner shall explore two central forces energizing theatrical creation: the drive to create organized informative structures and the impulse to let the untidy, the uncontrolled and the unexpected invade the scene.

The term "redundancy" or "noise" refers in information theory to the necessary background enabling information to be transmitted clearly and saliently.

What is the role of redundancies and formlessness in the shapely composition of a theatrical piece? What is the function of tensions between raw matter and finished material, the rough and the refined, the indefinite and the definite, the negligible and the highlighted? What are the inter-relations between these opposing poles in the creative process?

Concrete applications of these questions in actual theatrical creation will be illustrated by live scenes, taken out of works created by Ruth Kanner's Theater Group. This will be followed by an interactive analysis of these scenes in the light of these questions. The next stage will be conjoint experimentation. Actors of the theater group will present some structured, well shaped and polished scenes while the workshop participants will be invited to propose ruffling, tarnishing additions and modifications, in order to examine the effects of "noisy" redundancies and counter-expectations on the structured compositions.

The scenes to be presented are taken from the works:

Dionysus at Dizengoff Centre – adapted from the book by Tamar Berger. A penetrating investigation of the historical layers of a shopping mall in Tel Aviv performed as a story-telling theater that engages various theatrical means to ask challenging questions about the roots of the Zionist existence in Israel.

Discovering Elijah – the earth-shattering event of the 1973 Yom Kippur War, re-evoked through S. Yizhar’s extraordinary text, penetrates the surface down to the bare scream, to the very depths of horror, raising moral issues that seep through.

Cases of Murder – November 9. 1938: A protocol of fear, brutality and death. Based on Manfred Franke’s book Mordverläufe. The writer reconstructs the acts of violence committed against the Jewish citizens of the Reich during “Kristallnacht.” As an adult returning to the scene of the crime of his childhood, he reveals and exposes the mechanisms of moral evasion, vague and ambiguous talk, and turning blind eyes that made it possible for what was done to be done.

The Woman Who Preferred To Search for Food- from a story by Orli Castel-Bloom. A grotesque account of a woman’s journey in search for food in a hunger-stricken country. A symbolic, surrealistic commentary on the disintegration of central Israeli myths.

The Ruth Kanner Theater Group has been engaged, since 1998, in exploring its own surroundings by searching for a local theatrical language, interweaving storytelling, physical theater and visual imagery.

CPR has invited some of the most exciting and diverse Wales based and international theatre directors to Aberystwyth for an intensive participatory project that offers a rare opportunity for both experienced and emerging directors to gather and share the methods, approaches and skills of professional directing practice via laboratories and presentations, demonstrations and dialogue. To book one of the limited spaces on this laboratory or to find out more about other laboratories that will be taking place at the forum please get in touch.