Recently, as you may have seen somewhere on Social Media, ScriptDawg held a read through of two scripts we’re going to be developing and producing over the next month written by Leah Bynre and Othniel Smith.

This will be very one sided and I imagine that if she is reading this, Leah is going to start resenting me for not talking about her script as much as I do the other. However In my defence, I missed the majority of her piece by retrieving late comers who were lost in the labyrinth of the USW, Atrium… She herself also being one of them! So I do beg for your forgiveness, it’s not preferential, I love your script just as much.

There’s a reason I feel drawn to Othniel’s piece, although I should give you the synopsis beforehand: 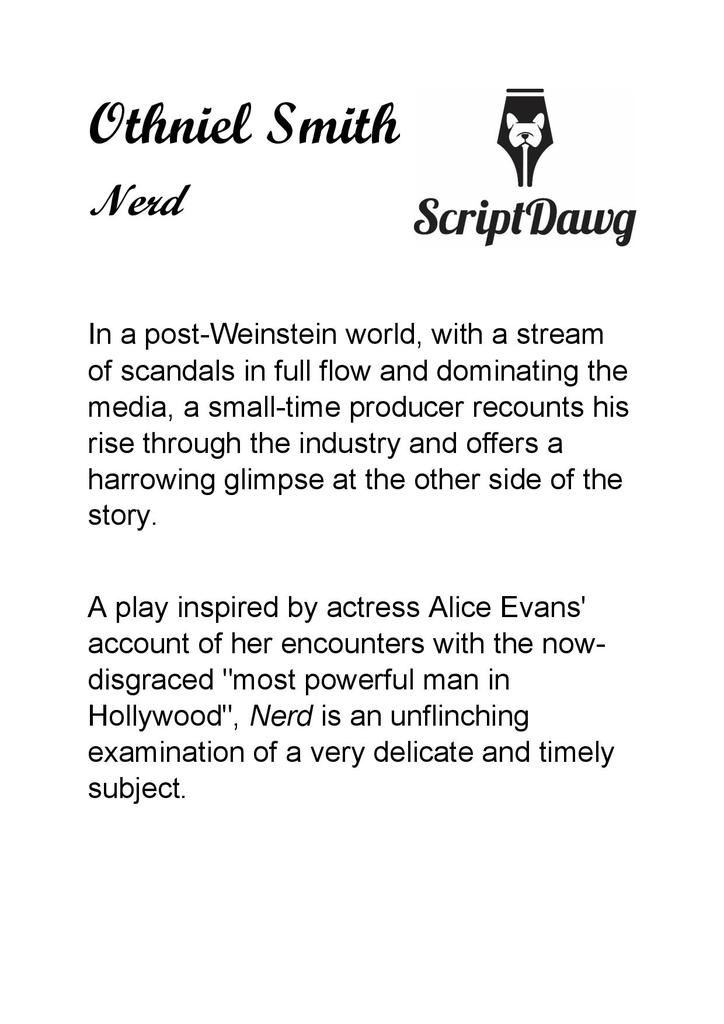 As I was saying, my obsession with this script is because I wrote something similar that was performed up in London in response to #Metoo.  I had written it purposefully pandering to the expectations I held of the audience. So, I traveled up and caught the performances and, I completely understand why, the night was driven by bitter hatred of – not abusers – men in general. Case in point, the audience was asked to rhythmically stamp their feet and shout ‘No!’ to the patriarchy. The pieces were good, but I couldn’t help but think that the format of the night wasn’t helpful with the movement.

There’s been countless events and even performances due to #Metoo, most providing a safe-space for victims to tell or have their stories be heard. I have no issues with that at all. But, other than us knowing that a lot of women & men experienced harassment, and a few baddies have been exiled (somehow this didn’t happen to Victor Salva, but I can’t imagine seeing another film from him), nothing else followed. Oh, except for Hollywood being completely behind the scandals and telling us off for it…

I realise what I’m doing and you’re probably expecting me to say “We’ll make a difference!” but I don’t think we will and it’s not what I’m trying to get across. Something that really interested me happened during the post-read through discussions with the audience. They were providing us feedback for the scripts and I asked “How did you feel the script was handled, given the subject?” and almost immediately a woman’s hand shot up. I’ll be honest, my first reaction was “Here we go!”

Although, she told us that she was annoyed, she was most annoyed with her reaction to the script. I’m paraphrasing, but it was along the lines of “I keep rolling my eyes when he talks about the events, but I keep getting frustrated by how human he is” It was strange to hear that, but made me feel relieved because I thought to myself “we’re on the right path then”.

After she had finished speaking, more women spoke up and it seemed divided on how people felt about the protagonist: some didn’t like him, one said it was a refreshing perspective and others would have liked to have heard more about his life. All these answers surprised me because, and from what I’ve witnessed at other shows, I was coming into this in ultra-defensive mode expecting a roar of “How dare you!?” But, it was just all unbelievably reasonable.

I think, and you creatives will hate me but I feel fine to say as I’m just outside the sphere of influence to get away with this, you need to step out of your comfort zone and leave the echo-chamber which has engulfed theatre at the moment. Come along, obviously it benefits me and the others, but I think it’ll benefit you to see a piece which isn’t “Oh, aren’t we men just soooo horrible!”

It’s a tale about a grey area, which is told pragmatically from a protagonist who is… only human.

To conclude on this rambling, I think a lot of theatre goers have a mind-set which is being perpetuated by a narrative which sees the world as black and white, good or bad, no in-betweens and people are doing themselves a disservice by trying to ‘prove’ themselves right. Thank you to those who got involved, and if I am incorrect with what I said about the read throughs, please feel free to let me know.

Plus, Leah’s piece is sidesplittingly funny and intelligently written. It promises to make a vegan out of the most hardened of meat lovers just with the sheer level of references and quantity of meat involved. There were also suggestions from the audience that this would work really well as a radio piece, so we’re now considering how we go about achieving that as a live performance. The night isn’t just all awkward topics and conversations. I’ve never been more happy or confident with putting on two scripts before, just felt the need to get the conversations which have followed since we’ve introduced them off my chest.