“I have doubts, but that’s not what’s on my face. I have the face of a barbaric celt.”

September 2014. Remember the helicopters? The metal fences? The international press?

Obama is in Wales.

Right now Wales is the centre of the world.

Cut to Pippa, who is protesting, alone, on a roundabout outside the Celtic Manor. Her life has been shaped by the political decisions that came before. She doesn’t fully understand just how much, but it doesn’t matter. She’s a rebel warrior. She’s made in the mould of generations of Celts, of Rebecca Rioters, of Chartists who stood outside another hotel in Newport and refused to be ignored.

She needs to be seen by those important, glamorous people in that big, glamorous hotel. She’s there to make sure that whatever happens inside those walls isn’t about those people or that hotel. It’s about her. It’s about her family and her community. Global politics is meaningless unless it trickles through every valley and under every terraced house door.

This one-woman play is set in a pre-Brexit Wales, and was first written as a ten minute piece before the referendum was even thought of. Pippa is fighting the disconnect between the people and the politicians. She feels the injustice of a quarter of the population of Wales living in poverty; an ever increasing percentage of people using food banks; and the need to choose between heating and eating, despite the UK being the fifth richest country in the world.

Today, two years on, those things remain unchanged. But that same sense of injustice has manifested itself in a vote to defy the will of the political insiders. In response to this, Golf Course War Machine has developed into an hour length exploration of the humanity inside the political rebel. Because screams like Pippa’s have been going unheard for too long. The specifics of what a vote to leave the EU actually mean are as nothing in comparison with the primal need for political agency; a need that people died for less than 200 years ago in this very city. Because everything starts with someone, even if they’re from somewhere the world has always underestimated at its peril.

“I have doubts, but that’s not what’s on my face. I have the face of a barbaric celt.”

Golf Course War Machine is being performed at AJ’s Coffee House on City Road in Cardiff, from Sunday 6th to Tuesday 8th November at 7pm.

The first performance (Sunday) is ‘Pay What You Can’. On Monday and Tuesday tickets are £5 each.

Golf Course War Machine is written by Chris Harris and directed by Luke Hereford. The role of Pippa will be played by Melanie Stevens. This is a co-production between No Boundaries Theatre and Clock Tower Theatre Company’s KILN series. 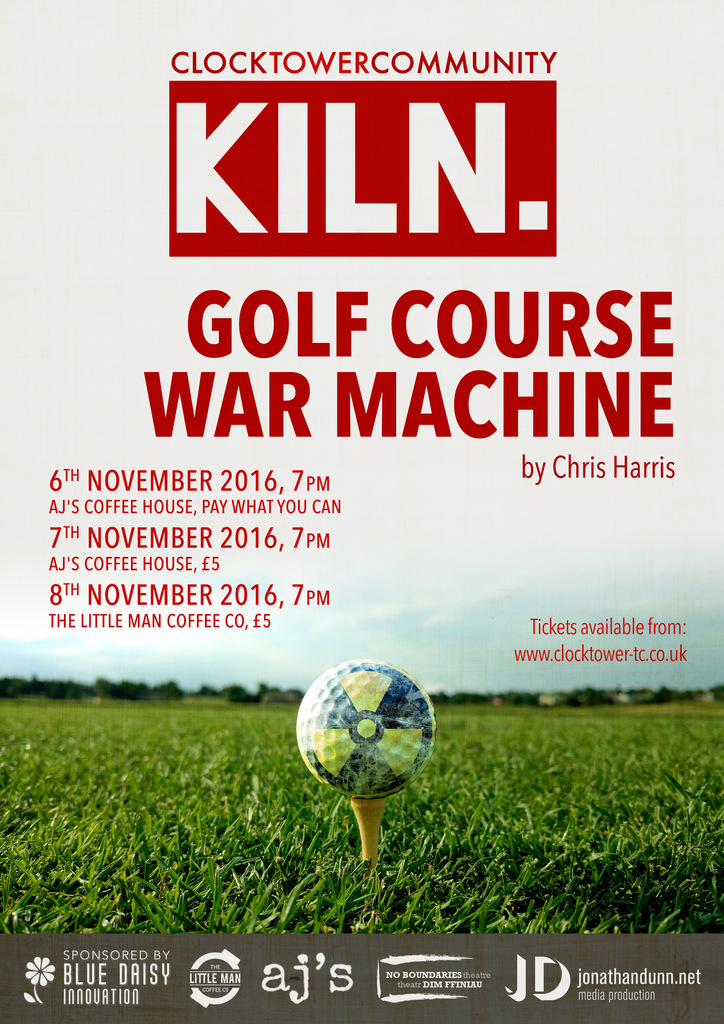