By Benny Andersson and Bjorn Ulvaeus

A fabulous celebration of ABBA’s greatest hits and 70’s culture Mamma Mia is the ultimate feel good musical, full of energy and oomph. The massive film sensation has revived the stage show’s popularity with sell out performances around the country.

Personally I was a little disappointed, having heard that the stage show is very different from the film I found the opposite to be true. Many of the costumes were VERY similar if not identical, characterisation was alike and even the choreography was familiar. A welcome addition to the live performance was the inclusion of some of ABBA’s songs that didn’t make it to cinema. This stopped the performance becoming too predictable but didn’t stop a rowdy audience singing along!

Before I go on to rant I want to stress that I did enjoy the energy and feel good nature of the show but there were some flaws that you wouldn’t expect in a professional tour (but maybe I am just too picky?). For the whole of the first act the sound levels seemed to be out of balance with some characters barely audible, it was fortunate that the audience were familiar with the lyrics as most of the story is told through the music. The reliance on the songs I felt was far too great, the brief stints of acting were a little lifeless and seemed to just fill time between tunes. 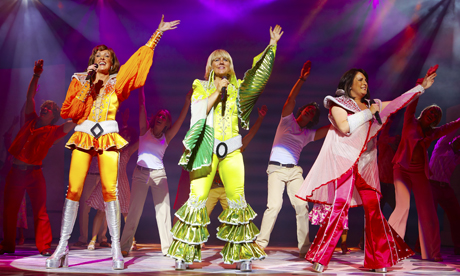 My biggest complaint was that due to the audience’s familiarity with the show they treated it like panto, offering (often completely irrelevant) replies to the cast and would sing in what were meant to be dramatic silences. Although funny to begin with it soon got tiresome and definitely lessened the impact of the emotional scenes in act 2.

The highlight of the evening was most certainly the encore; the cast were clearly enjoying themselves and the audience were on their feet. The choreography was breathtaking, especially from the male members of the cast who performed acrobatic feats as it they were a walk in the park. It was a fabulously camp, loud and energetic crowd pleaser that ensured every single person left with a warm fuzzy feeling inside

I would definitely recommend it as a Christmas treat but don’t expect to see anything new.

Comment by Guy O'Donnell on November 28, 2010 at 6:43
Great review Chelsey, loved the comparison between the film / live show and the audience expectations of what the show actually was.