We had 4 CCTV cameras and 10 microphones (6 radio mics, 4 handheld) feeding into 1 mixing desk that fed into 1 vision mixer and encoder, and 1 laptop computer. We had 12 meters of ethernet cable connected to 1 router, connected by 22 meters of coax to a Satellite dish on the roof of an art classroom in Edinburgh, which sent a signal 22,000 miles to the KA Satellite in space.

A map of the audience spread around the world: 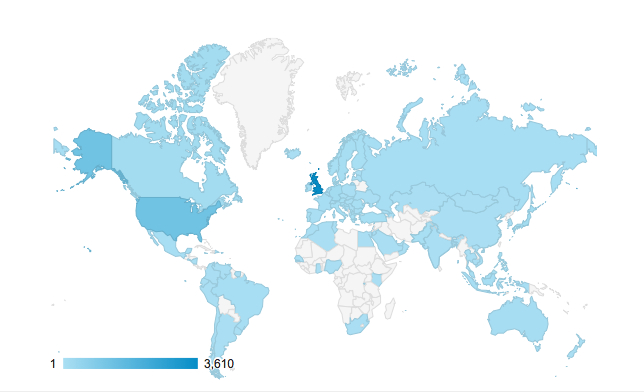 We had over 6500 audience members watch the Bradley Manning livestream from 1269 cities in 103 countries. 56% of the audience were based in the UK, while other considerable audience bases could be found the US, Germany, Japan, Canada, Ireland, Netherlands and Australia.

When watching the real time stats, we could see that there was an audience member in Portland (US) watching at the same time as someone in Port Talbot (Wales).
20% of our audience watched on mobile or tablet devices, on a variety of over 60 devices. From feedback on the chat, we know that one audience member in Australia was watching while on a bus!

We had guest 'hosts' on the livestream chat each night. Statistically, our most popular night was hosted by Alexa O'Brien, the Journalist who provided an extensive archive of the only available transcripts of Manning's closed trial. She was joined on the chat by TROBM's Writer, Tim Price.

During the three weeks of streaming to livestream.com, we built up a new network of just under 4,000 followers on the platform (this was the first time we'd used the site). We were able to embedd the livestream, chat and links system on our online Community, Facebook and the Huffington Post.

So that's the headline stats for now, enough #geekout!

Congratulations, that is indeed Immense!

Well done to you all Jx