October 17th 2013 I attended the opening night first showing of the Forest Forge production: Free Folk, written by Gary Owen and directed by Kirstie Davis, at The Sherman Theatre.

Free folk follows five strangers as their paths cross one stormy night and they become trapped not only physically but mentally as we the audience witness relatable situations with the internal struggles and personal journeys of each character. We are invited into the mind sets of this vast range of personas and it begs the question in our minds, what would you do in that situation?

The characters are a range of diverse individuals: Karen (Melody Brown, an impatient woman desperate to get home before dark. Shaun (Tim Treslove), a burly man with a hint of a nasty streak. A couple,Tim (Lee Rufford) and Hannah (Charlotte Croft), Tim is desperate to settle down and provide while Hannah is exasperated and feels the itch to travel. Lastly Pearl (Maggie Tagney) the ‘sweet old lady’ living alone in the house that she was born into and refusing to leave much to her sons’ dismay.

Throughout the course of the two hour play, Gary Owen took us on an emotional rollercoaster with each character. We experienced fear, excitement, sadness, hope and the primal need for survival. I found that characters gave us more of an insight into their personal conundrums and we began to develop relationships with their situations. By the end I felt myself urging Karen to stand up for herself, hoping that Shaun wouldn’t return to steal from Pearl and I felt disappointed when Hannah and Tim did eventually split up. I was pleasantly surprised however that the play didn’t finish when the stormy night was over, I enjoyed that we got to see how each character fared after the life changing experience.

The serious undertone of the play does have a comical edge in the writing which I feel that would appeal to anybody. Therefore Gary Owen has cleverly written this piece in a way that there are no restrictions on the audience. I was also intrigued by the artistic director David Harworth’s use of the set and staging in what I would class as a confined area. Such a simple set was able to transform into a house, car, museum and the forest. The use of projection was also creatively used to aid the flashback scenes during the play. Considering the play only had five actors It was interesting to see the way the choreography allowed each actor to be present in all scenes but also fade out whilst one character was delivering a monologue.

To my pleasant surprise I really enjoyed this piece, as from reading the original synopsis I felt that not much was given away leaving the door open for interpretation. However I found it to be fantastically written and performed. I would most definitely recommend anybody to attend this play, initially you may feel discouraged by the two hour time scale but I can reassure you it’ll be worth it. I feel Gary Owen has written a brilliant piece that invites the audience to be right there with the characters trapped on the stormy night, building relationships and feeling the emotions running through the situation. 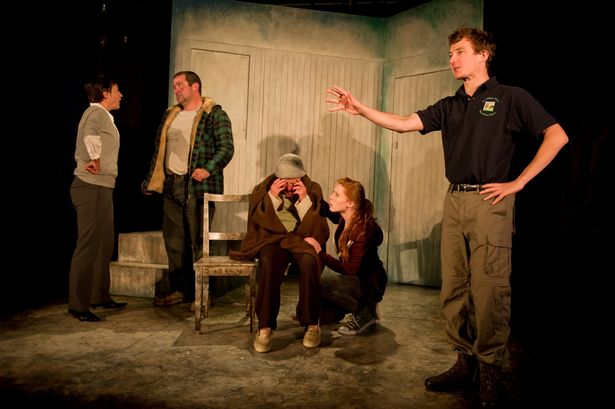