Tuesday 26th of November I attended Script Slam at The Sherman Theatre as part of the 40th Birthday celebrations. Script Slam exhibited nine new original Welsh plays over the course of three days, all keeping a theme of anniversary to coincide with The Shermans’ celebration party.
Fortunately I was able to catch the first evening to which we were treated to three pieces of work; GM written by Neil Walden, Together written by Neil Bebber and A Very Modern Office written by David Harris, all plays were directed by Matthew Bulgo. With compére Alan Harris introducing our panellists Róisín McBrinn, Michael Salmon and Gary Raymond at the beginning of the show.

The first play, GM, introduced our cast for the evening, Sara Harris-Davies, Gareth Milton and Hugh Thomas. GM tells the short story of an English jeweller heading to Wales to source gold for the Queen’s 40th wedding anniversary ring, we then meet the couple that own the mine and desperately seek to provide what is needed. Fear and bribery techniques arise and we see the jeweller with an offer he can’t refuse. Cleverly written that leaves you asking questions when the lights go out.

The second play, Together, touches on the confessions and tiring vows made by a couple as they celebrate their 40th anniversary together. Blunt home truths and vicious spats at one another show how life sometimes isn’t how we expect it to be, yet we still stick together through thick and thin, til death do us part.

The final play, A Very Modern Office, follows a young temp cleric as he introduces the modern age into an elderly mans’ life work. A Very Modern Office forces us to see exactly how much can change in a generation and how something so simple and resourceful as paper can so easily be replaced, with an underlying message showing how traditions are being lost to the rising movement of technology.

After viewing each play compére Alan Harris would visit each judge for a comment on how they viewed and responded to each piece of writing. After the last performance the audience was then asked by a show of hands to vote for their favourite. Myself and the majority vote went with Together; I felt it was beautifully written, realistic and relatable to how sometimes we can struggle to keep our word when making a promise. The actors read the script with passion and convincingly played out the parts they were assigned. Script Slam is an ingenious idea and something that definitely needs to be promoted across Wales, a brilliant showcase for Welsh talent and hopefully something that can inspire all writers to want to present their ideas in a constructive environment. 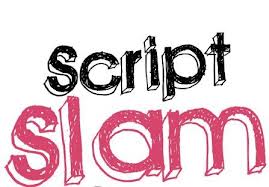