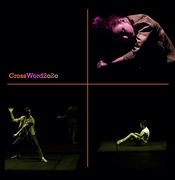 Matteo Marfoglia, Dance Artist & Choreographer, is bringing his live dance show ‘CrossWord’ to outdoor spaces at care homes and hospitals across South Wales from the end of August. The performances will take place in courtyards, gardens and even carparks, as the residents and patients enjoy the experience from their windows/balconies under social distancing rules.

Matteo Marfoglia choreographer of the work says: “This idea sparked from the urge to find new ways to bring live dance to people, especially vulnerable people who may have been shielding for the past few months during these uncertain times.”

He goes on to say: “the idea came to me when I was imagining how will I make dance performances again during social distancing restrictions?! It suddenly came to my mind that I already had a show ready to go and perfect for these times. I choreographed CrossWord in 2016, each performer dances in a 3x3 metre square, never touching each other. Who would have thought that would be so useful and so current 4 years later in 2020?! We will create a grid with tape on the floor and fluorescent parachute cords that will really grab the attention.”

Rehearsals for CrossWord kick off next week with the first show taking place on the 27th of August in a care home in the Swansea region with the tour continuing until mid September taking in 11 performances in locations between Swansea and Gwent.

CrossWord is 20 minutes dance show original made in 2016 and toured worldwide, and looks at the idea of language and isolation. Matteo was interested to work with his native language (Italian) and use different dialogues to instigate movement, words become sound and take on another meaning. How can we connect to a foreign language through its sounds and tones rather than its meaning and how can four isolated dancers still connect with their movement through a distance.

During the performance the audience will be able to gradually piece together the work as it unfolds in front of them, across four solos, each complimenting the next to create a rapturous, rhythmical group finale.

CrossWord will see Matteo Marfoglia himself performing together with other three Wales- based performers Camille Giraudeau, Ed Myhill and Marine Tournet, and with costume design by multi-disciplinary artist and film maker Tina Pasotra.

CrossWord was originally co-produced by National Dance Company Wales and Festival of Voice in 2016 to be performed at the Dance House. The show is never been performed in outdoor settings before and rehearsal starts next week to create an adaptable new version which can be performed in different settings.

The project is funded by Arts Council of Wales and supported by Wales Millennium Centre, Age Cymru and National Dance Company Wales.