Brand New Musical Sells Out Weston Studio So I Have To Queue Around the Mezzanine Level With M&Ms and Rhiannon Davis For Company! 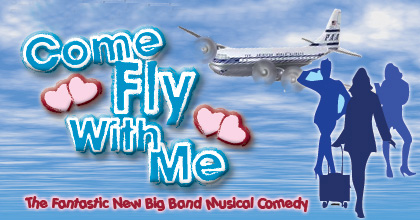 Last Thursday, I was invited to see 'Come Fly With Me', a brand new musical based around Rat Pack Songs, in the Wales Millennium Centre's Weston Studio. I had been to see Rich Tunley's last production, A Midsummer Night's Dream, so was really looking forward to seeing his next show and to seeing how the actors who had been cast in both shows were getting along.

WMC and the Cineworld are the two buildings in Cardiff which make me crave candy with my entertainment and Rhiannon and I had a job deciding which M&Ms to have. The yellow ones seemed to be very alluring, what with the peanut factor and yellow packaging, but the brown-wrapped ones seemed more fun (maybe the nuts were too healthy?)so we plumped for these. I was really looking forward to the show and as we climbed the steps up from the huge foyer, sweets-in-hand, I realised so was everyone else...

The queue went from inside the Studio, all along the mezzanine, along to the upper level of the Bar One - so I was very glad we had something to munch as we waited to get in. The bloke I sat next to gave me a weary look as he saw my sweets, but he needn't have worried - the sound of the Big Band filled the space and my feet were tapping too much to keep an open bag of M&Ms on my lap.

The story focused on a group of pilots and flight attendants who, due to stormy weather, are stranded in heady Las Vegas. Cue mafia-ties, blossoming romance, unrequited love and lots of shakin' tail feathers.

There were very strong peformances from the key characters, particularly Chris Jenkins who displayed real depth as he explored his character's journey, as well as being a talented singer and dancer. Christina Richards was fantastic when she held the stage - and the audience's rapt attention - all by herself for one song. Tom McLeod and David Colvin played off each other brilliantly as incompetent mafia heavies and lovable clowns. The ensemble performers were great, providing the play's context and atmosphere, filling the stage with exuberant dance, which was no mean feat considering how small the stage space became after it was filled with a big band and 2 extra seating rows.

The production was very ambitious, both in its artistic reach and development plans. There is talk of the production touring next year and it would be a very popular show. I really hope that the production team are able to get the support and resources needed to ensure that this goes ahead but if I could ask one thing of the creative team, it would be to please keep the simple yet highly effective elements that make this show really work. The stage and lighting elements made the show feel of the time; the musical felt innocent, part of the mythical 60s where vinyl was recorded in studio bathrooms on 4-track and boys (like those of the musical) managed to get to their mid-20s without having even kissed a girl.

I always love watching talented performers on stage, especially when this is mixed with the ebullience of young emerging performers. 'Come Fly With Me' had this in the aeroplane-load and I'm looking forward to what the writers develop and where the performers go next.

I'd second everything that Catherine's said about this performance - truly enjoyable - but have to add that the band was A-MAZ-ING! The live music added something special to the overall peroformance and it was great to be able to see the players on stage (I'm off to dust down my saxophone!).

The energy and enthusiasm of the cast really stood out on the night (something I've found disappointingly lacking so far in touring musicals at WMC). Whether this was down to the relative youth of the cast or made tangible by the intimacy of the Weston Studio, it was exciting to experience and left me wanting more.

Comment by Calum Small on August 13, 2009 at 12:26
Hello Catherine, I would like to say thank you for this but Richard and Chris have beaten me to it and said it far more eloquently than I could.

I didn't realise that you had come and I apologise for not saying hello afterward but I was in a very 'old man' frame of mind and bed was calling me!

I'm thrilled that you enjoyed it so much, and good call on the m&ms.

Hope to catch you soon!

Comment by Rich Tunley on August 12, 2009 at 12:12
Thanks for your words Catherine.
It is a very exciting project - and well worth developing!
There was a great deal of good will, time and donations of talent from cast, musicians and many industry professionals who worked on CFWM. I have always had faith in the piece and was very proud of the end result.
Will keep you posted.