My face was a shade of perplexing purple as I grappled to keep my trousers at a decent level while I nervously threaded my belt back through the loops of safety, all in front of a group of onlookers who were seemingly blissfully unaware of my plight. 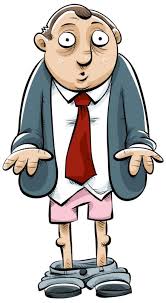 Having gathered up all my possessions from the watching brief and the chatty WPC I continued on my journey only to be confronted by two shady looking characters who answered to the names of Daniel Mannings and Tom Powell. I told them I was Tom ‘Bones’ Malone and one of my friends was Donald Duck.

They let me in.

There was a buzz of anticipation going around the audience as we witnessed several members of the Hijinx Theatre Company scurrying around making sure everything was ready for the live broadcast. Particularly impressive was Lindsay Foster as floor manager. Her one-liners, and quick and smart repartee, and her movement and facial expressions revealed the comic genius she so obviously is.

Lindsay was ably assisted by Richard Newnham aka Sir David Attenborough (explanation later) who carried out his duties with due diligence and in the process skilfully despatched some deliberately awkward questions from a member of the audience.

The camera operators Richard Horrigan and Gareth Clark took their places and Stuart Campbell did his final sound check. With back-up support from Mr Purnell’s assistant Martin Vick, the emergency stunt-double Andrew Tadd aka Ben, and runner Sian Fouladi, the cameras were ready to roll.

The show opened to the sound of Final Countdown signifying the lead up to the Hijinx Unity Festival which runs from the 1st to the 5th of July. ‘The Matthew Purnell Show’ was announced as the host made his way to the stage. Hello, good afternoon and welcome was the sentiment to Matthew’s introduction. 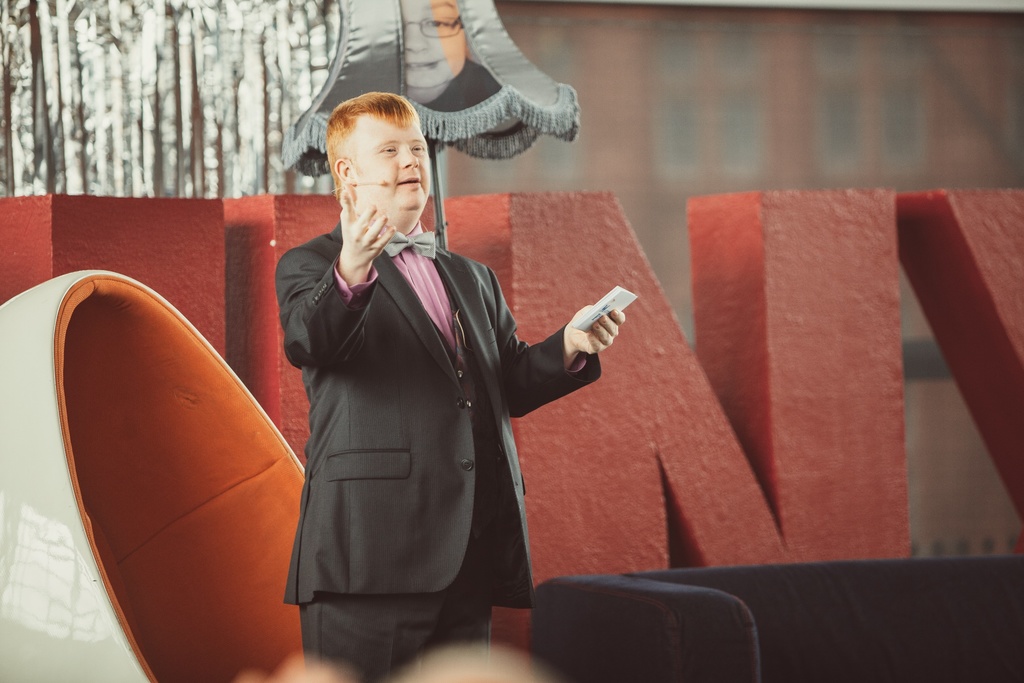 Cocooning himself in a sixties style pod chair he proceeded to interview a succession of guests with the deliberate intention of making the audience aware of the upcoming seventh Unity Festival.

First up was Vanessa Morse, resplendent in Tory Blue, and Lord Dafydd Elis Thomas. They were immediately put at ease by Matthew who referred to them as Ness and Dave (not Nessun Dorma). Ness wearing her yeti boots, the impresario behind the highly successful marketing of Hijinx and the Unity Festival, gave us a spin on how things have been developing.

Dave said he was privileged to be a guest and valued that so much he had cancelled a VIP school pick-up run. Later in the week he was seen on Cardiff station exchanging words with my nearest and dearest, explaining how much he enjoyed the event but he was now looking forward to watching an important round ball game on Saturday instead of kicking around a political football. 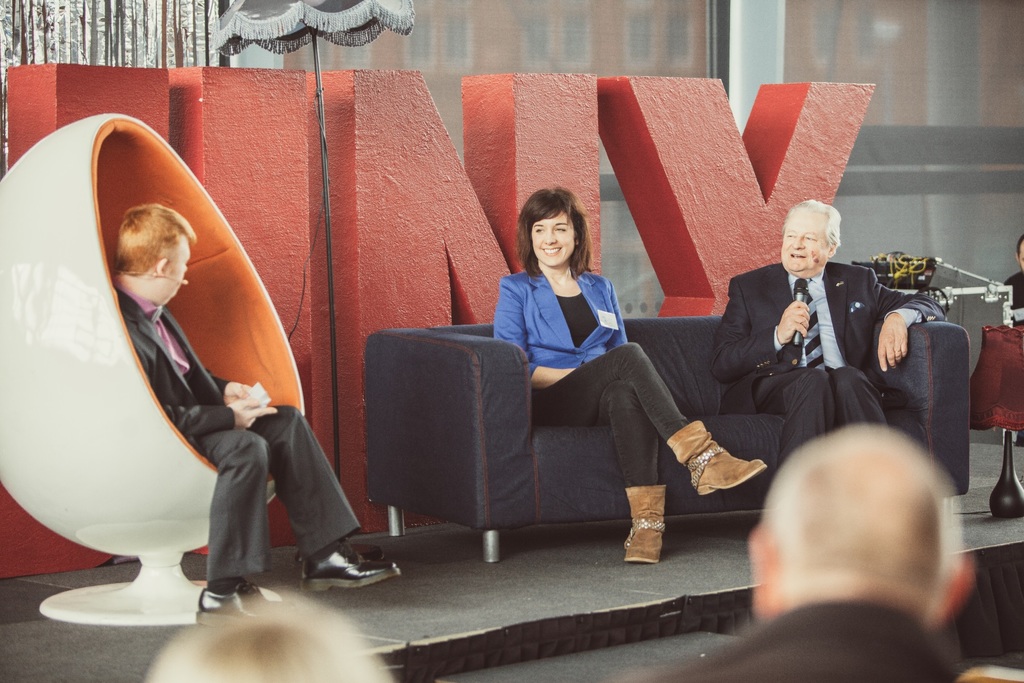 The third degree treatment was also given to Clare Williams and Kirsty Rosser. Footwear continued to be an interesting side attraction. Clare, in her soft shoe bovver boots, is a doyen of the performing arts and is the executive director of Hijinx. Her exuberance for the Unity Festival was well in evidence as she responded to Matthew’s prompts.

A well-established performer with a strong suit for clowning, Kirsty, in kinky leather boots, gave an insight into pod-based performances which will feature as one of Hijinx’s contribution to the Festival. 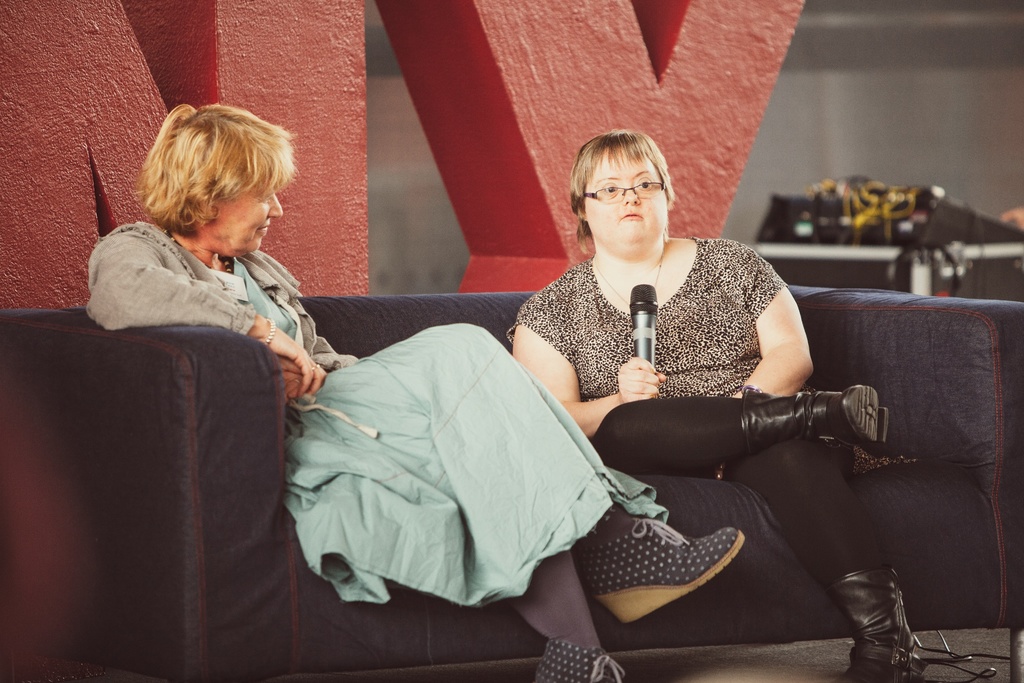 Matthew Mullins, an actor of diverse talents, had the most arduous task being interrogated on his own about the award nominated Beneath the Streets which will once more journey down into the underworld, this time for the benefit of the festival goers.

As well as the guests on the couch there was a documentary about the festival narrated by Sir David Attenborough (aka Richard Newnham) and an ‘I’m sorry I can’t be with you tonight Matthew’ film from some shady downtown bar abroad.

The show was closed, in time-honoured fashion with a number entitled Unity with Matthew taking centre stage with the rest of the inclusive rock band Vaguely Artistic. 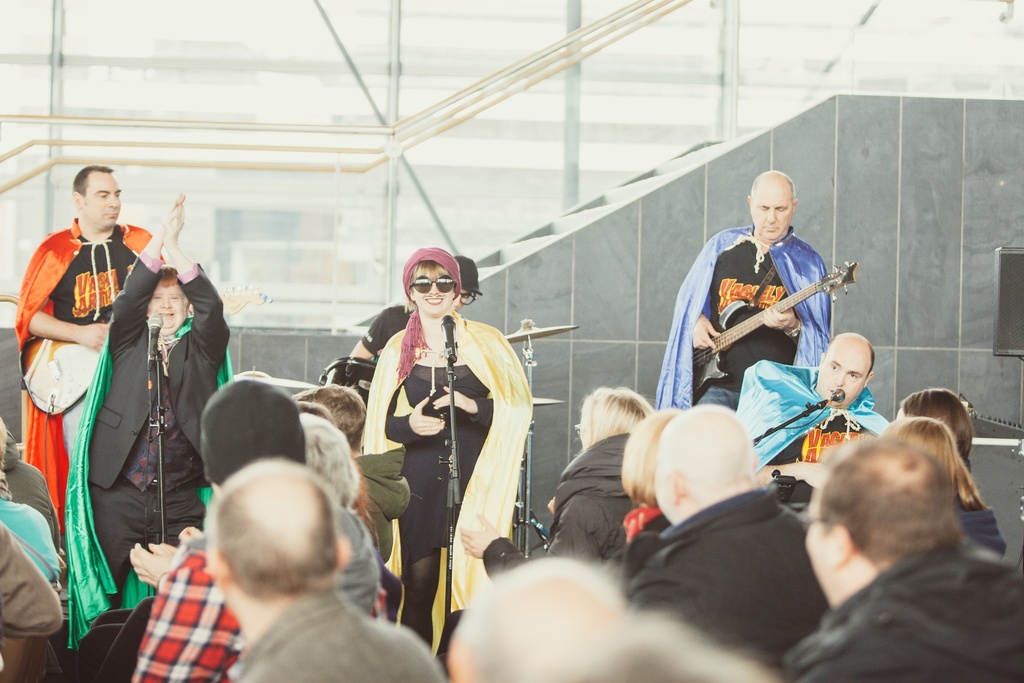 This was a golden opportunity to get to know most, if not all, of those associated with the Hijinx family, and what a wonderful experience that was.

Whilst everyone in the audience had a great time no-one was left in any doubt what a momentous occasion this year’s Hijinx Unity Festival will be in the world of performing arts.

From 1st - 5th July 2015, performers from Mozambique, France, Germany, Belgium, Italy, Spain, the UK and of course from Wales’ own Hijinx, will be showcasing their work in the heart of Cardiff City Centre and at the prestigious Wales Millennium Centre.

Jaw-dropping circus, roaming theatre shows, trapeze artists, dancers and musicians will fill the streets of Cardiff this July in a celebration of the best inclusive and disability arts from around the world.

The Hijinx Unity Festival is created by Welsh theatre company Hijinx to give a high profile platform to stunning work made by disabled and non-disabled artists working together as equals.

Through a high quality programme of performing arts, the Festival promotes positive images of disability and social inclusion to audiences and has grown to attract over 10,000 visitors a time since its creation in 2008.

Highlights of the 2015 line up include a weekend of free performances on The Hayes, Cardiff City Centre on 4-5 July. Much of the Hayes including Tabernacl church will be transformed into an eye-catching performance space, with more pop up venues in Royal & Morgan Arcade and St Davids II.

Headlining the weekend are dare-devil French circus artists Cirque Inextremiste with a breath-taking balancing act above the Hayes. They will be joined by German theatre company Blaumeier-Atelier, puppetry theatre specialists About Face Theatre, Seville-based dance company Danza Mobile, visually impaired trapeze artist Amelia Cavallo and Hijinx’s own pop-up theatre shows ‘The Pods’, to name but a few acts. Internationally renowned dancer, Marc Brew, and his company will perform a dance piece set on a deserted island made from six tonnes of sand.

The Festival also offers a ticketed programme of work at Wales Millennium Centre from 1-5 July, including hard-hitting dance from Mozambican artist Panaibra Canda, spell-binding dance theatre from Italian company Teatro la Ribalta, physical theatre from Belgian company Theater Stap and Cirque Inextremiste’s new show Extension in which one performer trades in his wheelchair for a mini-digger.

The Hijinx Unity Festival will be launched by an enthralling, immersive theatre show created in collaboration by Hijinx and Punchdrunk Enrichment which will take place in a secret location within Cardiff. Featuring a large cast of disabled and non-disabled actors, it is a sequel to Beneath the Streets which had a sell-out run in 2014 and was recently nominated for Best Production in the English Language at the Wales Theatre Awards. The performance will run from 26 Jun to 3 July, overlapping with the first three days of the Festival.

This year for the first time the Festival includes a Schools’ Day for Year 6 and 7 pupils focussed on inclusive performance, to inspire the next generation about the abilities of people who live with a disability. The day has been generously supported by Millennium Stadium Charitable Trust.

NOW IT’S UP TO YOU

Tickets for the Festival are on sale now and are available from Wales Millennium Centre on 02920 636464 and at wmc.org.uk.

We all have a part to play in celebrating inclusivity and we will all benefit from it. So please take some time out and join in the fun at the Festival.