The night before you begin is always full of doubt. So partly to help me clarify & partly in a spirit of openness, which I hope runs through the way I work, I thought I'd share, with anyone who's interested, what we're working on and where we're at.

Tommorow we start the first stage of R&D on Light is like... a new show for younger audiences and adults who can still be wowed, publicly this is how we've been describing it: 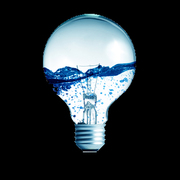 “How do lights work?” asks my nephew. “Light is like…”

Be careful how you answer. If you tell a child that light flows like water they might take you literally, and end up drowning in the shimmering stream that flows from the smashed light bulbs. Step aboard, as we navigate the incandescent torrents, and allow your sense of wonder to be awakened.

Working collaboratively with performers, puppeteers, lighting, sound & set designers, we’re diving into the unknown, to make a new piece for touring in 2015.

In private it’s not quite that clear - but that's part of the nature of a devising process. I sometimes describe it as floundering in the dark; I know the direction of travel but am never sure about where the final destination will be. Partly its because I'm only one of the people involved - and if I wasn't interested in their thoughts, input, skills then I'd write a play, employ actors who looked like the characters in my head, get a designer who gave me what I asked for... you get the picture.

For me part of the reason I make work collaboratively is the belief that the combined talents of the people in the room have more potential than me on my own. This isn't an easy process, and making work collaboratively can be risky - but for me it’s a risk worth taking.

So for this project I'm working with

Our starting points include a short story by Garbiel Garcia Marquez, the speed of light, Quantum electrodynamics, sailing, slow glass, Tryweryn, the way a child looks at the fish in an aquarium & half truths.

The main things we're looking at this week is how to tell the stories and what the relationship is between the audience and the performers - do they inhabit the same world, or are they observers. We're working for five days in LLanover hall before sharing where we've got to....

We’ll let you know how we get on.

Looking forward to seeing this on Friday Matt!

good luck Matt, I look forward to seeing what you've all created on Friday.