The First Spark of Playwriting: The Idea 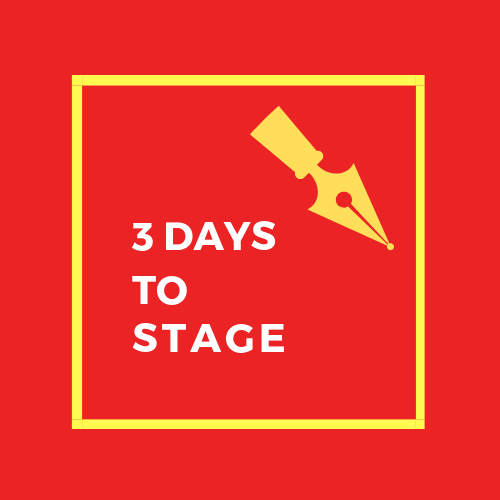 We at 3 Days to Stage have spent most of our time in Welsh theatre helping others create stories, with as few prescriptions and as much freedom as possible whilst still streamlining the whole process. We've found that churning out those scripts, from absolute zero to works of substance, is not nearly as intimidating as you might suspect.

Structure. Characterisation. Tone. Sharp dialogue. Such heady concerns are to be reserved for rainier creative days.

Today, we pose and offer a version of an answer to the fundamental question... where does it all start?

For those of you pursuing a career in writing, the vast majority of your time will be monopolised by writing to a brief. Working with a pre-existing idea or developing a pre-existing script. But when those practical pay-the-billers are out of the way, you'll be left alone in the wilderness with your own notions. Or the heavy-hearted absence thereof. But, at the very least, you're going to need that original idea to generate a calling card, your entrée into the world of playwriting. And why be in this game at all if not to express your own vision?

So, you need something new. What tools do you already have at your disposal? Well, there's your noggin for one. There's the laptop. And there's the world. Pretty good starting points. However, when the world is your oyster, when you can manifest absolutely any story you want, it can be quite challenging to settle.

The first realisation to make is that, at some point, you're just going to have to pick one. There's no sense in waiting around for the idea to strike as a bolt from the blue. These moments of pure inspiration do of course occur. But mostly, if you want to take playwriting seriously, you won't have that luxury.

The second realisation is that an idea can come from anywhere. It's a cliché, but it's true. An overheard line of speech. An image. The way someone is dressed. ANYWHERE. Your grand vision needn't arrive fully-formed. If you're capable of such thinking, consider our hats doffed.

So, for the sake of argument, you have to come up with an original idea TODAY. Here's some tips and exercises to help you along. Some are well-established, some are our own personal offerings... 1) Read and Watch and Listen

Read the best books. Watch the best plays, films and TV shows. Listen to the best radio plays and podcasts. On some level, every story has already been told. The key is finding your own spin. As long as you're sufficiently skirting plagiarism, there's no better study source than what the greatest writers in history have given us.

Where do you work? What are your areas of expertise? Stories with the ring of truth ring the loudest. The exploits of students are a well-worn trope. But maybe that's because it needs an injection of fresh perspective. What do you have to say about the experience of university that hasn't been said before? Maybe you're a freelance actor. No one knows the struggle of that world better than you. Use it. Use the failed auditions, the wonderful cast members you meet that are whisked away as soon as the next job pops up. Perhaps you work in a restaurant. There's that customer that complains about every meal he orders, yet refuses to eat anywhere else. Who is he? What's his story? When you're not rushed off your feet, use your job to inspire. You're there enough as it is.

Scan the headlines. Choose one that particularly stands out to you. And don't read on. Fabricate a small world around that headline. Do the same with blurbs. Book covers. Posters. Write for ten minutes in prose, stream-of-consciousness, and see what happens. There may be a gem within.

You're at your local bar. There's a regular that never speaks to anyone. Every half hour, she glances at her phone before returning it to her pocket. What's she waiting for? Who's she waiting on? How did she end up here? Maybe she's estranged from her family and she's waiting on their call. Maybe she's looking at her phone constantly because she wants someone to realise she's alone so that they'll talk to her. Such stories, such characters are easily imagined because those stories are all around us constantly. We just have to pay attention.

Find an interesting word that piques your curiosity. Write it on a piece of paper. And mind-map it. Write down anything you associate with that word, anything at all. You might surprise yourself. And in that surprise may be inspiration. Let's offer one for the sake of it... How about "Borders"?

6) Pick a Generator, Any Generator

If you're truly lost in the dark, there is absolutely no harm nor shame in a little bit of artificial inducement. There are numerous online story generators at your disposal. You might just find that serendipitous combination of character and theme that starts the ball rolling:

Think back. What memories, good or bad, stand out to you? What were the circumstances surrounding them? How could they have been different? Is there a memory that still makes you cry or laugh out loud ten years after the fact? If so, there's probably a story there.

Find music that stimulates you creatively, whatever that may be. If rave tunes are what get your cogs whirring, plug in and go. Get your headphones in and wander. Observe. See what the fusion of sight and sound conjures.

Where you go from there... is a blog for another day.

How Can We Help Further?

At 3 Days to Stage, we humbly offer our services as proof-readers, script editors and all-round writerly helping hands. Our three-day method of script generation is tried and tested. Here's a brief rundown if you're unfamiliar and wish to get involved with future events.

We select writers to take part in our challenge, whereupon they’re given two days to produce a short 5 – 10-minute script under a certain criterion (for example, a secret theme or topic) and under our guidance. The opportunity is open for anyone, regardless of skill level. The three days consist of:

The writers congregate to receive their instructions and are given tips on how to proceed.

The writers submit their first drafts, which go through script editing and the writers take part in a table read.

The writers submit their final drafts, for actors to perform a script-in-hand performance in front of a live audience. We’ll be collaborating with Avant Cymru in February, for the 72 Hour Writing Challenge for Under 24’s, for the 80th Anniversary of How Green is My Valley. Get in touch with either us or them if you're interested in taking part!

After the performances, there’ll be a screening of the film adaptation at the Park and Dare, Treorchy.

Pop along for a lovely night and to see just what we're all about!