NTW TEAM's new Arts Council of Wales funded project has begun.  TEAM will be working with Pembrokeshire Learning Centre in Pembroke Dock to create an album of original music, ably led by the force that is Molara Awen.  Molara has a wealth of experience as an artist and musician - she was the voice of Zion Train for 14 years and has been the creative power behind a wealth of community projects in Pembrokeshire and beyond.

Molara started the project by hosting one to one sessions with the learners in which she got to know all about their musical interests, their hopes and ambitions for this project and a little bit about each of them as individuals.  She discovered that the pupils have an eclectic range of musical tastes, from Florence and the Machine to Kenny Rogers, via Stormzy, ACDC and Bob Marley - one thing is certain; this is going to be an interesting journey.

The next task was to interview candidates for the role of Creative Assistant and joining us on the panel were pupils AJ and Ben, who were brilliant, asking challenging questions and conducting themselves with a level of professionalism that they should be proud of.  The chosen candidates were Wayne Boucher and Ben Mason, both talented local musicians who were appointed just in time for a gig, which we held at the school on Monday of this week.

The gig was Molara's way of showing the pupils what can be achieved when a group of musicians come together. For many pupils, this was their first experience of live music and what an experience it was!  Joining Molara, Wayne and Ben were Pembrokeshire TEAM Associate, Robbie, Tanyard and Boatyard Studio's Caitlin, local saxophonist Alan along with the amazing Jez King of Regime and the incredible Nii Tagoe of Osibisa.  One of the teachers even made a guest appearance on guitar.  What a privilege it was to be in the room, watching this talented bunch come together to create a brilliant and inspirational experience for the pupils and what a fantastic start to our new TEAM project. 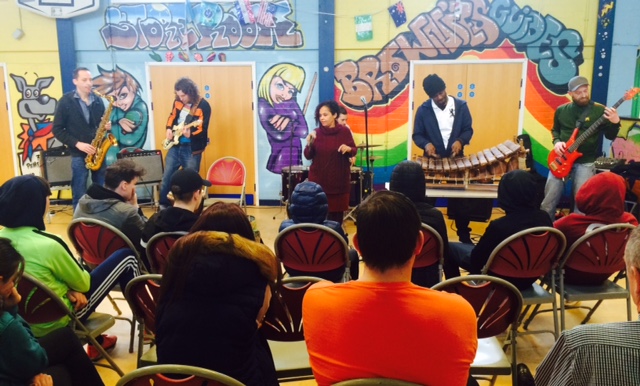