Get Organised! (And Change Everything)

Do you remember the image of Jesse Jackson during Obama's acceptance speech last year? Tears of pride involuntarily rushing to the face of this now-elder-statesman of the Civil Rights era, as a man he had sometimes disagreed with achieved the dream that Jackson had dared voice - a black man in the White House. Most people, whatever their politics, must have had at least one 'Jesse Jackson moment' during the Obama campaign last year; a moment when tears welled up as the significance of it all struck home to the heart. I had a few, but the one I remember most, perhaps because of its seeming insignificance, was watching an elderly white woman talk about the campaign a few weeks before the poll. Not long before, the Republicans had had a surge on the back of Sarah Palin's feisty populism. Palin had caused a lot of joy at the Republican convention by mocking Obama's CV as a 'community organiser' and comparing it to her record as a small time mayor. 'What's a community organiser?' she had sneered. 'Is that like a mayor without actual responsibility?' For a moment she had made Obama's career seem small and lost in the language of political correctness.

The elderly woman that I saw speaking on the news was organising for the Obama campaign in Virginia - a state that had seemed impossible for Obama to win until very recently, but which now was now looking like it could go Democrat. The woman in the interview looked like she'd had a lifetime of working for lost political causes and was about to finally get her reward. The reporter commented that Virginia wasn't turning just because of the resonance of Obama's message, but because of the depth of his grass-roots organising. The elderly woman smiled into the camera, her own eyes teary but joyful. 'The Republicans laughed at us' she said. 'They said "What on earth is a community organiser?" They are about to find out!'

It's a cliché now to talk about how Obama energised the web 2.0 generation, but 'community organising' isn't a web phenomenon, it's a way of thinking about society, and how we interact with it.

If you read books like Charles Leadbeater's We Think you begin to get a sense of a very different way of developing ideas and orgnaising ourselves from the usual clichés of the inspired leader, genius inventor, or lonely artist. Leadbeater looks at how the best ideas are often developed collectively now - whether that involves open source software, inventions like the mountain bike, or 'beach democracy' where people organise space without any property deals or trespass laws.

The arts, and particularly theatre, ought to be great at this group organising: much art, and all theatre, is a communal effort. However, we are very caught up in certain Romantic myths of the artist. We are also hampered, in our organisations, by a fear of being seen as 'unbusinesslike'. A great, if pretty long, speech by Diane Ragdale of the Carnegie Melon Foundation was just sent to me by the fantastic Dominic Campbell, director of the Bealtaine Festival in Ireland. The speech was given last year, but it's way ahead of anything else I've read by an arts funder. Ragdale talks about a completely different way of making arts happen under themes such as 'Go Cellular', 'Let the Art Dictate the Space, Not the Other Way Around' and 'Fuel a Fan Base - Sample and Share!' Dominic sent me the article because he'd been taking a look at this website and thought we were following a lot of the principles that Diane Ragdale talks about. I'd agree. And a lot of the companies Ragdale mentions, from the UK's Improbable to New York's Foundry Theatre, are companies that we are hoping to make links with because of the way they work.

There's an opportunity at this moment to re-imagine arts and creativity by using completely different organisational principles. I'd say that a group like 'Dirty Protest' is a good example of these new ways of working. If you have time, take a look at the links to Diane Ragdale and Charles Leadbeater and let us all know what you think we can use at National Theatre Wales. Or point out other ideas and examples.

In the meantime, thanks to everyone who has been contributing to the lively 'What Shows Where' debate. There have been loads of exciting ideas (and some lovely photos!). (In fact we are so inspired by the photos we are going to have a summer photo contest - watch this space for details.) Lucy and I will be spending time this week poring through all the input and trying to imagine what the Theatre Map might look like.

Thanks also to the smaller but very thoughtful group of folk that responded to my question about diversity in Welsh theatre. I thought the responses were very honest and useful. We need to find ways to push forward with this debate over the coming months.

This week I am off to the Living Landscapes conference in Aberystwyth A fascinating range of theatre makers, academics, artists and environmentalists will be talking about the art and performance of landscape. Hope to see some of you there! And talking of trips. Who's going to Edinburgh this year, and do you have any recommendations of shows to see?

Comment by National Theatre Wales on June 21, 2009 at 20:35
Anne, have really enjoyed you blog posts. Don't agree with everything (I think you are a bit too easy on commercial theatre - as though something making a profit somehow proves popular value - surely something the banking crisis has disproven for every), but I really like the stuff about the participant replacing the audience member. I have left a couple of comments directly on the blogs. Wish I could be at the Cornerhouse event. Do share your blogs directly on this site by putting up a blog that directs to your posts if you have time.

Comment by Deborah Powell on June 19, 2009 at 14:18
Exactly my point Anne. There is no distinction - its just a question of degree! Nothing is ever truly passive is it ...
What troubles me is that looking at this industry from the 'outside', the stark reality is simply that trad theatre is failing; its fairly inaccessible with declining/non-renewing audiences, facing stiff competition for its share of the entertainment £ and not seeing itself in its true place in the eyes of the consumer; as part of a broader cultural mix. Addressing just one of these uncomfortable realities - non-renewing audiences - theatre has to start nurturing its attendees (newcomers, die-hards, laggards, early-adopters to name only a few potential categories). And nurturing may require some fairly 'to & for' fayre (to use Leadbeaters terms) to be on the menu as well.

Comment by National Theatre Wales on June 18, 2009 at 22:58
Thanks for this Anne, I've taken a glance at the site, but I will come back to it and try and make some comments in the next few days. We are really keen for NTW to embrace this debate at the heart of our company.

Deborah, thanks too for bringing a wider business perspective to all this. These are exciting, challenging and very creative issues. I think we can open new horizons if, as you say, we imagineer well enough! More soon.

Comment by Deborah Powell on June 18, 2009 at 20:39
I totally support the three points Anne makes on the Art of With below, so I just downloaded Leadbetter's article for Cornerhouse. Very interesting & worth a read but, speaking from a strategist's viewpoint, surely his distinction between the 'to & for' production (passive audience) and the 'with' production (active audience)are simply just two ways to segment the same, as yet largely undifferentiated and largely untapped, audience for the broad spectrum of artistic endeavour?

To connect with (or find) its audience, any production should try to meet any number of needs; perhaps offfering a means of escape from life's problems/dilemmas/suffering - a placebo effect; perhaps offering a means to signpost the future - imagineering - helping us think & reflect on new ways of living & working together. These are different needs and are required by different segments of the potential audience, or by the same segment at different times in their lives.

What is wrong with pursuing both passive AND active types of production. Why is one more favourable than the other - if it meets a need,it meets a need.

I'd say, artists need to embrace both the 'to & for' production as well as the 'with' type and not choose between them. After all, good art sometimes contains our current reality and sometimes it needs to transcend it. The key point to remember I think, is that the mode of artistic delivery needs to be fit-for-its-artistic-purpose, not the other way round.

Comment by Nathan Keates on June 14, 2009 at 22:09
I should be up there doing some improv on the street. Havent a clue about shows to see. Be good for me to hear whats suggested to see too.

“I think there are some surprises about who is playing what characters” @powder_house’s @Chelsey_Gillard and @JacIfanMoore talk about their magnificent cast for Antigone, ahead of its broadcast this Saturday. https://buff.ly/2X4fRT2 pic.twitter.com/TlEnwHRzas

“I think there are some surprises about who is playing what characters” @powder_house’s @Chelsey_Gillard and @JacIfanMoore talk about their magnificent cast for Antigone, ahead of its broadcast this Saturday. https://buff.ly/2X4fRT2  pic.twitter.com/TlEnwHRzas

Last chance to watch Constellation Street today, before @NTWtweets’s next instalment tomorrow. It was a wonderful piece to be a part of, so squeeze it into your Friday if you can Link here - https://www.amam.cymru/nationaltheatrewales/1416 …pic.twitter.com/o2Oefjk9he

Last chance to watch Constellation Street today, before @NTWtweets’s next instalment tomorrow. It was a wonderful piece to be a part of, so squeeze it into your Friday if you can 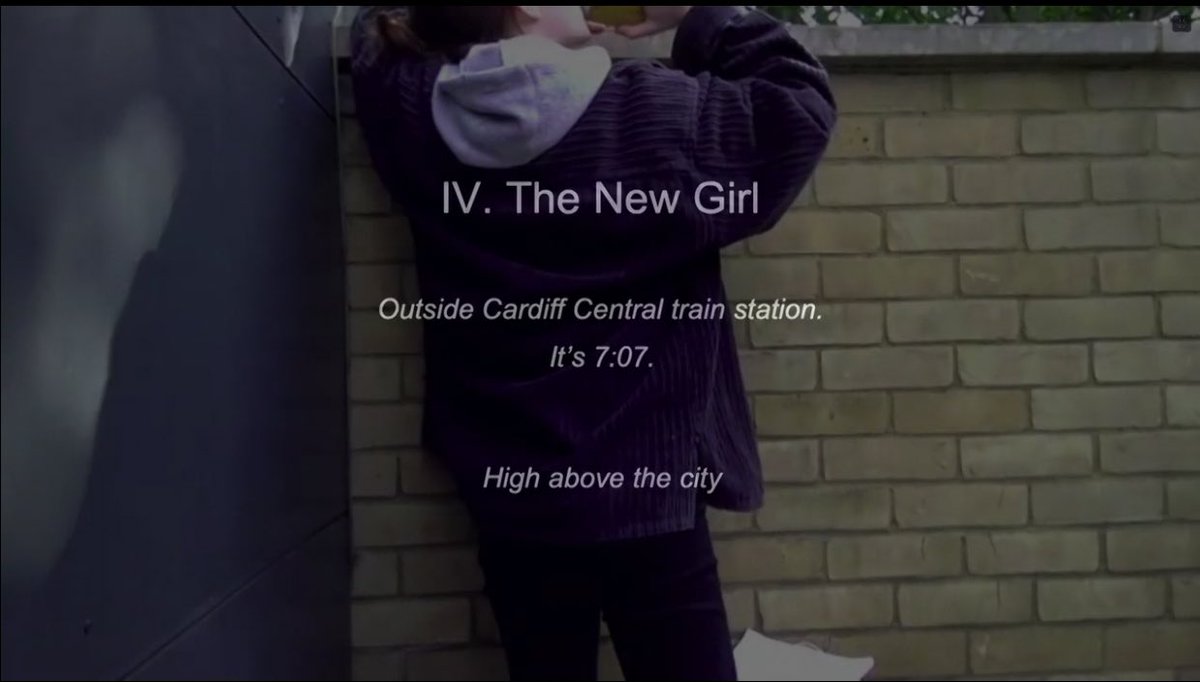