After an evening of editing (2 minutes) and discussing with Sam, we have decided upon a new project. The Standing Man. I can't explain what it is right now, but it links into my research work with NTW. I need to arrange to go back to the old library in Swansea in order to create the first part of the project. A creative response to the place. Down in the stack. I will get in touch with Paul to see if we can do our interview as well. Just need to figure out how to get down there.

WIN a pair of tickets to The Devil Inside Him Guest Night!

We have a pair of tickets to give away to one lucky winner of our prize raffle!

The Devil Inside Him Guest Night is Tuesday 11th May at the New Theatre, Cardiff.

Your Guest tickets give you access to the Guest event and you will also be invited to the exclusive after-show party at Cardiff Arts Institute.… Continue

Floralia Festival with all-female performers this May Day weekend!! See www.jambones.webs.com for details! 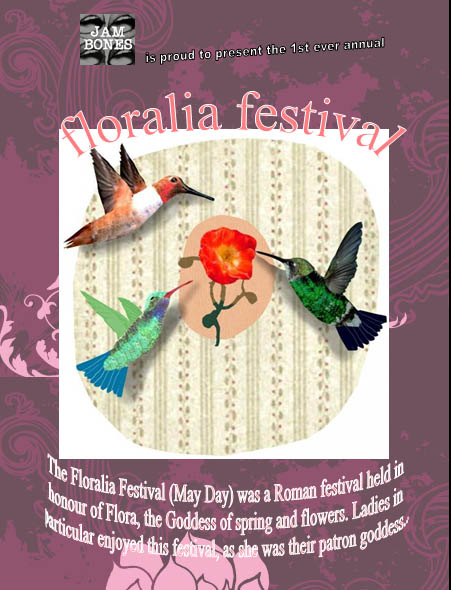 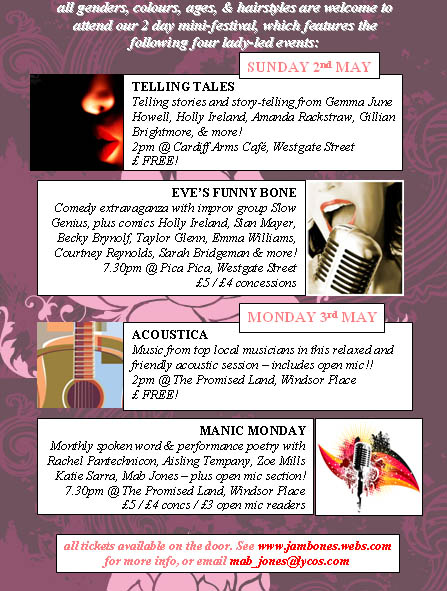 Had a really interesting session with the TEAM in Cardiff this evening - we spent a bit of time going through what NTW is doing online and how they can help spread info and links about Devil Inside Him to their networks. We had a brainstorm about how they could create a buzz around the show, and came up with ideas around live performances, audio and video resources they can create. Devinda has made a Group for TEAM Cardiff… Continue

Hi this a link to a website full of great speeches , stirring stuff !
http://www.onlineuniversities.com/blog/2010/04/50-incredible-historical-speeches/

Are you living in Cardiff and under 24?

I'm looking for young people to take part in the Cardiff Assembly.

Are you living in Cardiff?

Are you interested in getting involved in the Cardiff Assembly?

Do you know anyone who fits the above description whose details you could pass over to me?

If so please let me know by posting a message to me here.

Please do not publically post personal details like phone numbers, emails, date of birth etc. Send these to… Continue

Read here what the New Critics said about Shelf Life.

Click on the name of a New Critic and be taken straight to their review in the New Critics Group. See what they each thought of our second production...

Dylan Moore: "Our generation stands on the cusp of perhaps the greatest reading revolution since the… Continue

A tad belated but had to post to say what an amazing week I had last week on this project. The truly wicked Mathilde Lopez, incredibly funny Brent Morgan, mildly annoying Allison John, my new father Garry John, the immortal Steve "ladies man" Allen and the infectious Ellie Carter along with Ian, John, Lloyd and the rest of the team, was just amazing to be a part of and hardly felt like working at all.

All very fun but also thrilled to be in the same room as like minded,…

Day 61 - My Missing Laptop - Somewhere on the Fulham Road, London

These first two months have been phenomenal. Coming to terms with PhD research has been a struggle at times. Teaching in an FE college in Mid-Wales was pretty straight forward, and unlike this research project, teaching, by and large, gets done simply through it's doing. There have been times in these first two months where I have felt lost without the structure that teaching provides and at other times an incredible sense of freedom.
I've been to Blackwood, Krakow,…
Continue

I found the Exploratory and Laboratories sections of the Lab days a great idea, inspiring, intense and worth every penny, even the long train journey. Meeting the other participants, intelligent, interesting and creative people from around the world, it was truly… Continue

It was great to be back in Blaengarw on Monday night. This time it was to see one of the performers at our Valleys Assembly - Blue Baby Crew. They were definitely one the highlights of the Assembly & they didn't disappoint. Performing to another full house and another great crowd they were joined by singers, a tap dancer, drummers, comedy and dance routine from Greg Sage and his father Donald (yes,… Continue

Hi Guys - I'm on the Hunt for Hoodies again - Unused/unwanted

Thanks for all of the hoodies that you were

Able to give me, the last show of "A Hug…

Occasionally a day gets lost, not always through carelessness, but on this occasion I think I might have less it slip by carelessly.
Reading that doesn't go anywhere and writing that might be better never read. A late afternoon trip to the doctor in which he betrayed more than a minor intolerance to emergency appointments that turn out not to be emergencies. I am reminded of the time that I went to casualty with a head ache. The doctor in question used to be my next…
Continue

This is an extract from the blog I write approx weekly to promote the 40 Group Activities of Swansea U3A (University of the Third Age) which also discusses items of particular interest to me, hence for example non party politics, jazz and theatre.

THE SWANSEA ASSEMBLY, NATIONAL THEATRE WALES
Around ten of us from the Jive Group
took part with a fifteen minute demonstration including getting
newcomers… Continue

I spoke to Gary today, over lunch, his lunch not mine. I didn't eat. I just watched as he attempted to work his way through through a salad while talking about his work with Lone Twin.
We were speaking in the break between the 1st and 2nd Lone Twin Theatre Performances of the day. Alice Bell and Daniel hit by a Train. The third part of the trilogy, Festival, took us late into the evening and discussions were resumed over and Indian in the…
Continue

Working with Alison was like working with an old friend. Our ideas seemed to compliment each other and ideas evolved quickly. Alison was a good laugh and kept me smiling throughout the project. She has a wicked sense of humor and if you watch her for long enough you can see her talent for talking out the side of her mouth. One of my favorite Alison moments was while having a beer in Monkey looking out the window to see her pulling faces at me from the back of her Mum and… Continue