"The Want Of Intimacy"

The Want Of Intimacy from OTHNIEL SMITH on Vimeo. So the time is fast approaching the for the first Assembly I will have been involved in since my appointment as Creative Associate in May. I am beginning to get excited about what will be created between now and the 20th. I am beginning to put a team…

Calling all Wales- based Digital Producers

I just wanted to share with you all a really exciting opportunity from National Theatre Wales and Watershed:…

Upon receiving our ration books in exchange for theatre tickets, it was evident the performance of “Flights of Fancy” would transport us back in time. Leaving the ‘departure lounge’ we followed, not the usual route to our seats, but, via a stark black corridor marking past decades and along the way giving a glimpse of final backstage preparations, a route to the stage .From this position the audience was well positioned to admire the beauty of the…

Upon receiving our ration books in exchange for theatre tickets, it was evident the performance of “Flights of Fancy” would transport us back in time. Leaving the ‘departure lounge’ we followed, not the usual route to our seats, but, via a stark black corridor marking past decades and along the way giving a glimpse of final backstage preparations, a route to the stage .From this position the audience was well positioned to admire the beauty of the… 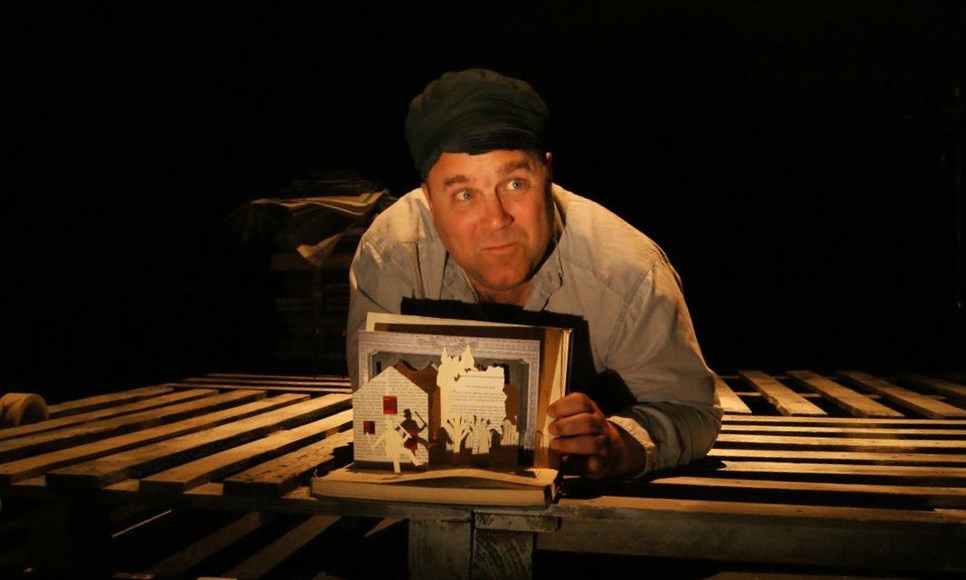 Theatre 2's intimate performance space provided an apt arena for Living Pictures Productions’ Diary of a Madman. As the audience entered in a dim light, a large man lay on his back, asleep or dead I wondered, on a square platform of plain wooden pallets, an origami bird sat on his chest. The atmosphere this created was tangible.

And it wasn’t just…

We have had four days in Ystradgynlais working on the Josef Herman project with the foundation. It has been a great week with some fantastic students. Even the locals in the street have said 'Shwmai Joe Bach' to me...

Hello all, just a brief look back at the work i've been involved in. …

A look back at #ntwjapan

A thing we do at National Theatre Wales is at the end of the project, we get together to talk about how it went. We call this a 360 meeting, and yesterday, all the team got together to share their experience of #ntwjapan.

For this session yesterday, I made a little video to show the team a little snapshot of my experience, and I thought I'd share it with you all here.

Hope you all enjoy.

Hi, everyone at the National Theatre Wales Community.

I have just joined your community; my name is ELICA MIWA, working as a theatre director and performer.

Looking forward to exchanging information and looking for future collaboration.

An evening of sheer showbiz at the Sherman!The audience included people who had known and worked with Dorothy Squires,even some who had lived at her lavish homes in the good times.Both the play's authors were present, mingling beforehand and giving an enlightening question and answer session afterwards.The effect of the production was to make you forget you were seeing a play at all. It was more like being allowed to peek into the life of someone going from rags to riches back to rags. The… Continue

FLIGHTS OF FANCY at Parc And Dare Theatre, Treorci, Friday 17th May. Review by Elizabeth Sumner.

The Parc and Dare Theatre at Treorci celebrated its centenary with a truly magnificent Flight of Fancy.  The evening of dance and music was a joy.  Here was a beautiful, traditional theatre for the using, and use it they did.  By placing the audience on stage and thus using the auditorium and circles for the performance meant an innovative use of space.  Even getting to our seats involved walking through corridors used by the artists in various…

Can't offer remuneration, but will pay for transport or travel to venue. Rehearsals to be held in Cardiff. Promises to be a good opportunity, with promotional material available for cv's.

Working on the rewrites for Rain of Blood for Castaway Community Theatre's summer show. Getting some good lines in - hopefully not too intentionally funny.

Also written some new scenes for To Kill A Machine...some new characters folks.

Is there a book club you can join that sends you a couple of new plays a month, you read them and send them back? Or you download it to your e-reader and it expires after a month? If not.....why not? Seems like a great way to get new work out there, and a great way to get people who otherwise would not take the time to find this new writing themselves reading and producing. So I guess the main points im asking for advise…

Say it With Flowers

The welsh singer Dorothy Squires was one of the most popular artistes of the 1940’s. Dynamic and charismatic on stage she topped theatre bills…

Say it With Flowers

It’s not far from Pontyberem to Trebanog but when “via” includes marriage to 007 , playing to packed houses in Hollywood and at The London Palladium and suing Rupert Murdoch it seems to be  a lot further.

Dorothy Squires achieved much but it was at a price . Her drive bordered…

Hi everyone - I'm composing a new musical called 'Stalking John Barrowman' set to premiere this Autumn in Cardiff. We are having a vocal workshop on Sunday 19th (short notice, I know!) and I'm looking for a few extra singers (particularly men) to get involved. The workshop is voluntary however could lead to other opportunities in the future. It is between 10am and 4pm (with lunch between 1-2pm) at the Coal Exchange, Cardiff Bay. Email me at plsteed@gmail.com if you would like to come along!…