competition prize - cold bottle of fanta for the first person to make a movie in 5 minutes at the Media Suite tonight...  Ryan won!!!

See what these guys think about National Theatre Wales TEAM!

Here are Tom, John, Jake and Laura. They are part of Aberystwyth TEAM. Here, they are meeting people on the streets of Aberystwyth to find the Aberystwyth Assembly question. I asked them what they thought of being part of TEAM and here's what they had to…
Continue


They went in shops, cafes, colleges, university, libraries, chip shops... trying to find out what matters to the people of Aberystwyth.

What struck me were the stark similarities between events 20 years ago and those of the present day, the play’s content is as…

The UK Design For Performance exhibition is now open.

Until April 16th you can view over 200 exhibits from UK designers, including the scale model and drawings for Birmingham Royal Ballet's production of Cinderella by John Macfarlane,…

IDST! Are holding an open meeting at The Parlour, 31 College Green Bristol this Thursday at 7pm for artists and performers interested in taking part in our upcoming project, Open Fire!

Open Fire! will be a series of performances based around fire, woven together to make a whole event, to be performed in mid-April. We are looking for people who want to be involved, and collaborate with others. It'd be…
Continue 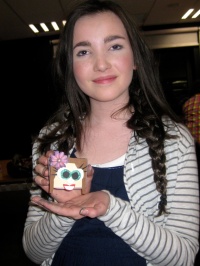 congratulations to Megan Williams, one of our young film-makers at Ffilm Scala - winner of the National Theatre Wales 1 minute "Weather" video competition!  She's absolutely over the moon with her flip camera prize... and so are we!

Devised by a cast of Cardiff's Finest

"#Fly on The Wall" e-trailer

It is with great sadness that we learnt of the passing of Sheikh Said Hassan Ismail, Imam at Cardiff Mosque. A foremost scholar and religious leader in Cardiff, the reach of his wisdom and generosity of spirit went much further than Muslims and Cardiff.

His work in uniting people of different faiths to build shared communities will live on, and his willingness to engage with people of all different walks of life and give time to listen and share experiences will always be remembered…

Kaite O'Reilly wins the The Ted Hughes Prize for The Persians

Kaite O'Reilly has won the Ted Hughes Prize for Poetry for her extraordinary new version of Aeschylus's The Persians.  The sixth show in NTW's much lauded launch year has already won huge plaudits, including TMA best design award for Mike Brookes and Simon Banham, and enormous praise for Mike Pearson; but what a truly wonderful achievement for Kaite, to take on this difficult and complex text, often argued and worried over, and to create such a vibrantly living version that Britain's best poets… Continue

Currently seeking Actors to cast two original one act plays ('Clown Cafe' and 'Blood and Thunder) which we are taking to the Exeter Fringe Festival at the end of June. 'Clown Cafe' was performed at the Swansea Grand Arts Wing last year in coalition with the Graduate Theatre Company to a great response. This a profit share production with each Actor playing a dual role in both plays which would offer a great showcase for all involved.

Auditions to be held at the Dylan Thomas…

A Year of TEAM

Attempting to pin down and describe the TEAM Experience is a very hard task indeed: In my voluntary role as Assembly Production Assistant, I've had the chance to tour Wales' communities,…

The amazing and extraordinary Knee High Theatre are recruiting a Project Assistant:

A Showcase Performance from Mzansi Cymru