We wanted to find theatrical substance to this extraordinary writing and make it just as powerful and effective off the page as it is on it.We explored different ways of framing the text from a short story in the book called 'But Not Really' to lift the drama and we filmed alot of our process to show the NTW, Rachel herself ,of course, and also to have a record of it ...when we develop it further down the line.

A dialogue-free meditation on the nature of masculinity. And beer.

Sam and I ran 8km today. Mostly up hill. Except for the bits where we were going down hill. I'm not sure which was worse, the endless agonising climbing or the occasional rapid descent. The latter puts a lot of stress on the tops of the thighs and the knees and I couldn't help feeling that I was going to fly uncontrollably face first into the mud. Or else involuntarily perform the splits and then have to wait to be airlifted to the nearest hospital. Sam led the way. This was his run and… Continue

The Valleys Assembly: When does the future start? Local people in Blaengarw answer the question.

A group of us working on the Valleys Assembly went through the Garw Valley last week asking questions and gathering local people's answers. Here are their answers to our question: When

does the future start?


And as an extension of this first question, a new question arose: When did the past end?…

I have decided that I need to find out something about philosophy. Starting with Descarte. It seems like a good idea, seeing as I am training to be a doctor of philosophy, that I know something about ... well, philosophy. So Descartes today, Kant tomorrow, and so on until I can list them all in chronological order like the kings and queens on the back of a ruler... was it just me that had that ruler? The Rulers ruler. I don't think it helped me do much more than draw straight… Continue

Hello everyone......Just when you thought the Pinter play has ended and you'd get a bit of peace...I thought i would share some different sections of text with you from 'But Not Really 'by the very gifted Rachel Trezise.

The moon shone against his house, showing up its new paint, a soft lime colour, like a woman in a new layer of confidence, stepping out into the summer for the first time in a mini skirt and a new pair of sandals. The hanging baskets either side of the front…

Great times had by all

Just practicing being a more virtual part of this community by saying a huge well done and thank you to NTW and all the community for the Assembly at Blaengarw last week. Huge congrats to Catherine for organising the event and thanks for giving Mess Up The Mess the opportunity to be involved in creating such an action packed week - we had a great time! Best food at Creations cafe - missing it already.

Our 4 New Critics attended the Press Night for A Good Night Out in the Valleys. They were asked to write a review of the show, send it to their mentor to read over and feed back on and then send to me to be published on the National Theatre Wales community. They have also been sent to Academi for posting on their website. Read on and see what 2 of our New Critics thought of the show. First is Dylan Moore, whose mentor is Lyn Gardner. Second is Megan Jones,… Continue

THIS OPPORTUNITY IS OPEN TO WELSH AND WALES-BASED ARTISTS! FOR DETAILS AND DATES PLEASE READ ON...

Theatre Sandbox is a new opportunity for theatre artists, companies and collectives. We are offering six £10,000 commissions to support the research and development of experimental pieces of performance which engage with Pervasive Media Technologies.… Continue

My last blog for 'A good night out in the Valleys'

Hey Blog, Sorry it's been so long since my last entry. Apart from being all consumed with putting the show on and touring, frankly I'm rather daunted by trying to do this blogging right. I have never been very good with technology!!!

We have reached the end of our journey with 'A good night out' and what a journey it has been. I sincerely hope that all of you who saw the production liked/loved it and were happy with what we achieved, I certainly am.

The job has been all…

The Classical Education Forum, Cardiff, has just released its summer programme. The prospectus provides courses, saturday schools and trips on a range of subjects, including the Arts, History and Literature.

There is also a trip arranged to visit the production: Aeschylus' The Persians in August.

Hello,
Just returned from a GREAT week in Barmouth where we held our 'Story Shop/Siop Story'.
It was a terrific, intense and inspiring experience. People really embraced the opportunity to share their anecdotes, memories and recollections, just as I hoped. Some wonderful tales and visceral images have emerged that will shape and form the creative backbone of FMS&S.
The visual vertebrae is developing and gaining…
Continue

Day 28 - Radio Ceredigion and the Black Box Recorder - The Little School by the Train Station, Aberystwyth

I have just arrived back from the radio station following an interesting slot on what could be Sam Christie's final show. That's the same Sam that I went to Poland with. He invited me along and asked me to bring some of my own music. So I did. I took an old carry case containing 200 cds that I collected as a student between 1997 and 2001. I explained that they were the product of my attempts to develop a musical identity, without any money or any direction. Consequently it is comprised… Continue

The V&A was filled with social games and playful experiences, for this Late at the V&A they teamed up with Hide&Seek to explore the collision of art, theatre and game design. I put on my PJ's grabbed my dice and sneaked, plotted and planned the night away. 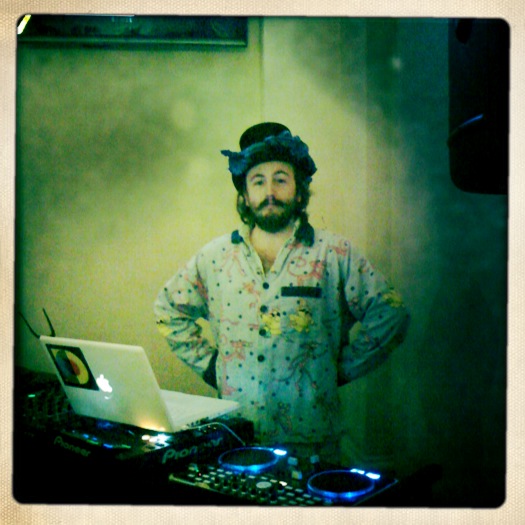 The end of a short but thoroughly wonderful era...

Last night was the final show of "A Good Night Out..." and what a show it was.

There was a lot of nervous energy flying around backstage as we prepared to say goodbye to our lovingly developed characters. The last show is always a strange one, as you feel the need and the desire to make it perfect. But there was extra pressure for me last night, as everyone I have ever met was in the audience (I exaggerate for dramatic effect!) But we needn't have…

Michael Groves (The film of the play) - Part One

My second ever play, MICHAEL GROVES, was staged at Chapter Arts Centre last July. Having previously written a piece about relationships (MAGNETS) I wanted to do try something more experimental. Following the performance (and feedback that covered the entire spectrum of enjoyment levels!), I put the development of the piece on hold, choosing to start something new and return to it with fresh eyes.

I completely forgot that Viv Thomas filmed the first night, and,… Continue

Day 27 - The Princess the Frog and the Sex Doll - Aberystwyth

I woke this morning and burst out of bed with enthusiasm. This was quickly replaced by nausea and the fear that I might be about to come down with something nasty.
It turned out that I wasn't, although I did avoid food for much of the day as a result. Poppy was sick again in the morning, so our weekly trip to the swimming pool was cancelled. So too was the trip to the cinema to watch the Princess and the Frog.
I received an email…
Continue