How I was scared twice in the dark at The BAC last week.

During my London visit this week, I spent a day in the Battersea Arts Centre (BAC) where I saw 6 shows as part of their BURST Festival.

The theme this year was '51 Reasons for Living', inspired by Barack Obama's presidential acceptance speech and they managed to pack 51 performances into this 16-day festival. Some of these were plays, some were installations, some were performance poetry, some were gigs, some were journeys for one person with a… Continue

My thoughts on True/Fiction: a Welsh Company with a London Production

I have just come back from spending a wonderful evening watching a fantastic theatre event. It was in London and it was a play by a young Welsh company.

It was True/Fiction's newest show, The Exquisite Corpse at Southwark Playhouse.

who are these people...not me?

Just an observation and thought to myself but put here because I can....I'm looking at the photographs of the housewarming party and find myself recognising very few people and am wondering how this could be so after being involved in the making of performance works here in Wales since 1991?I know that I can be an unsociable oik at times and Good Cop bad Cops' works dont always have mass appeal(until recently) but still...I wonder if this really is the beginning of something new and… Continue

Following successful productions of A ZOO STORY, MISS JULIE and OEDIPUS, A MIDSUMMER NIGHT’S DREAM is Black RAT’s latest offering to tour South Wales. With a thirteen-strong cast, this lively & energetic version of ‘The Dream’ guarantees all the fun, farce and mayhem of Shakespeare’s best loved comedy.

A royal wedding, eloping lovers, spurned friendships, an am-dram troop and a wood full of… Continue

While the sun shines unashamadly down on the borderlands - I'm on the last leg of an early morning train n' bus trip to Hay on Wye - land of books. As a theatre type I'm used to Edinburgh. I've never done Glastonbury as I have a tent phobia (if God had meant us to sleep in tents he would have given us inflatable backsides) though I have promised to do the Green Man in I this year which does look fab and where they have assured me that the tents are actually small bungalows in disguise. Anyway,… Continue

Do you want to get involved with NTW? Do you like playing? Call for Hide and Seek Sandpit Participants!

On Thursday 2nd July, we have got one of our first National Theatre Wales events and we would like you to take part.

It's called SANDPIT and it is organised by us, with Hide and Seek, a London-based company run by Alex Fleetwood.

Sandpit, like its name suggests, is a place where people can come together and play games and have… Continue

I was wondering if I could ask some people's advice?

I don't quite know how to word it, but...
I was wondering if it's possible to invite literary agents or something along them lines to the SpringBoard event at the Sherman, to see my play, Sunflowered?

I haven't a clue about this sort of thing, and was in need of some help:
If it's possible, how many are around in Cardiff, what's the best way of approaching this.. etc.

I will listen to… Continue

Not a very exciting post title I know, the world of blogging is unchartered waters for me. Excited to join this world and that of National Theatre Wales community. What a great idea and a way to communicate with like minded people.
Currently I'm working on the RWCMDs production of Duchess of Malfi on at Sherman Cymru until tomorrow night.
My next lighting design is Sweeny Todd for WNO Max in July, so a bit of a theme of revenge and violence in two very different mediums and period… Continue

For those of you (Nathan, Catherine) who have been trying to add events, we are reserving the 'EVENTS' section of the site for our own National Theatre Wales activities. So do as you are all joyfully doing and use the blogs and forums to talk about what you're all up to. Lucy D

on the road (A5 edition)

In a Hire Fiat with Lucy D on the road after a night of Mary Stuart at Clwyd. Good to spend some time looking around the venue and thinking about possibilities. Being a long term urbanite I always find it extraordinary to look out from Theatr Clwyd onto hills and fields and a smallish town where I lived for five barely remembered years. Feel like I am in a Chekhov but with a Fiat on hand to solve the existential travel issues. Lucy D is a mean driver. Schiller's Queen Elizabeth on the road but… Continue

DIRTY PROTEST: Theatre in the Yurt

Welcome to our Dirty July

GUEST CURATOR to be announced soon, it's going to be a good one.

Hi all. We are a group of graduates at from the University of Glamorgan and are all based in Cardiff. It is a mixture of young British theatre makers who have worked on a script by a new group of writers. It is a stage comedy based around a TV chatshow, with surreal characters and situations. Although this is not a show for the easilly offended, we hope it has something for every, also it is free entry. The details are lsited below and hope to see you there.
Dan… Continue

I'm with Nathan - can't work out how to post an event, so have to plug it in a blog post instead.

Led by Alan Pollock, the workshop will explore the use of research and documentary elements in popular drama. How much truth, and how much art should be employed? What do we mean by 'political' theatre? What kind of resources… Continue

Today i was looking at pictures of the National Theatre of Wales' shop in the arcade where everyone went and had crepes. It was nice to see so many familiar faces that i could put names to. I saw Gareth Bale and Mared Swain and Stephen Burkitt-Harrington. That is three faces and nearly enough names for four people thanks to Stephen. I saw the backs of some heads which were also familiar but obviously harder to put names to.
It does my heart no end of good to see Stephen serving posh drinks… Continue

Can't find how to add events, so I am doing it this way.

Intensive weekend workshop is on Saturday 13th June 09 to 14th June, starting at 10 AM till 4PM @ The Annexe, Ebenezer Chapel, Charles Street, Cardiff CF10 2GA. This workshop is suitable for beginners to improvisation and performance.

The journey to the unknown starts off the discovery and exploration of improvisation with Ludus Ludius' focus of play and playfulness. Throughout the weekend we get to know the players and discover the unknown together and exploring what improv is about… Continue 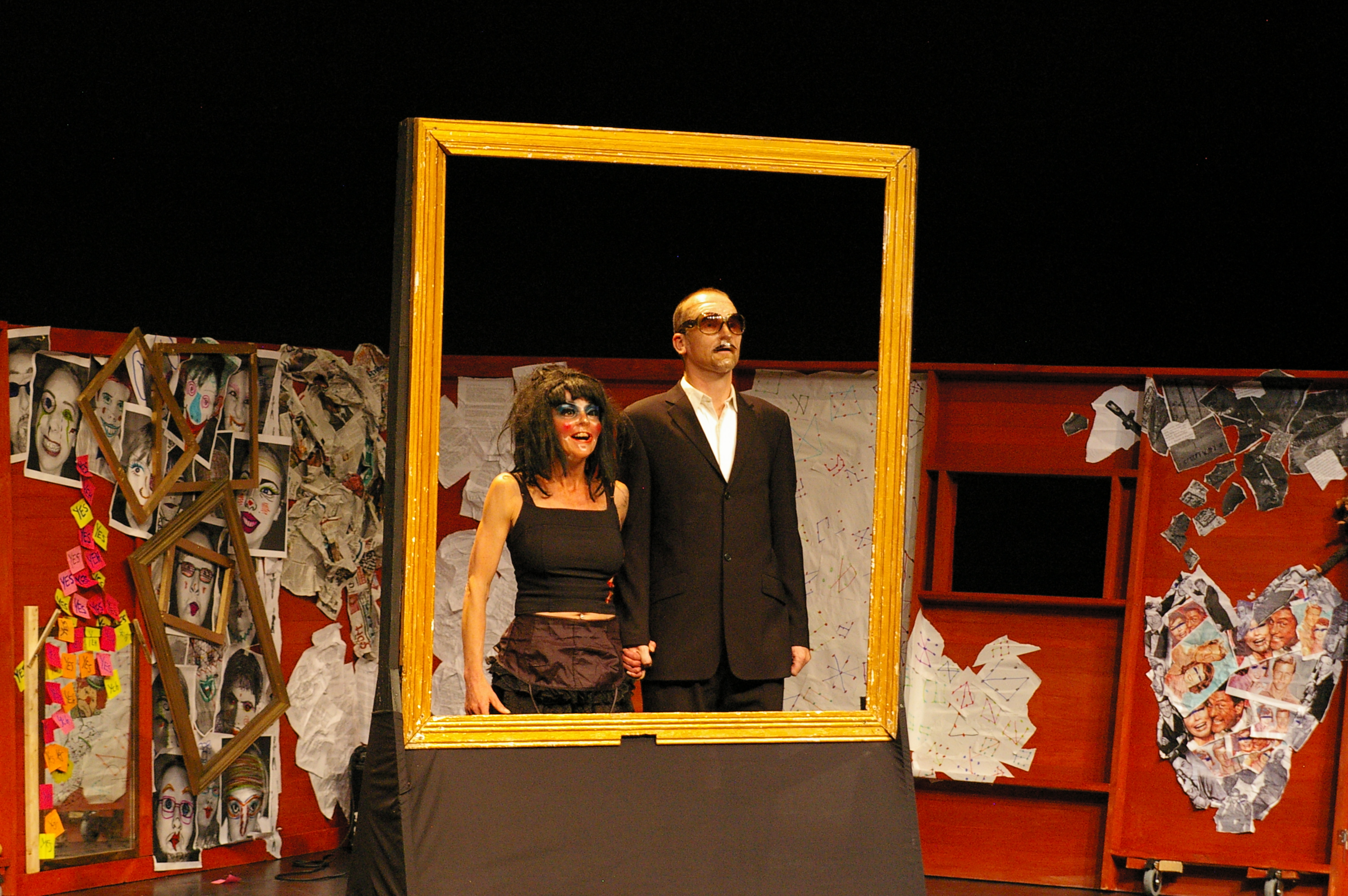 OK, so I've been told that posting about Unknown Pleasures 2009 on here would just be shameless advertising - but as it's a theatre development project (between Volcano, Taliesin & Swansea Met)I think it's something the community here should know about. Rather than me blathering on, here's a link to an article Paul wrote for the Western Mail (only I can't get the hyperlink option to work - think the link is too long, so you'll have to paste into… Continue

Work on in New York this July

I know this is miles and miles away from Wales, but if anyone happens to be in NYC this July and fancies a bit of theatrical escapism from Central Park, then I have a piece in this: http://web.gc.cuny.edu/MESTC/events/s09/woodman.html

It's free (always good!) and there should be a much larger site-specific piece to follow around Christmas time, touch wood!

This is my second play which I wrote as part of the Sherman's New Writing Course last Autumn. It's getting a public rehearsed reading as part of Egin: Springboard at the Sherman. Please feel free to come along and hold my hand.

Sally can remember everything. Except the face of her lover. Her memory is full, apart from the gaps where… Continue

Like the title says...only 4 more performances left of True/Fiction Theatre's critically acclaimed production of The Exquisite Corpse. If you happen to be in London between now and the end of the week, do try and catch it!

It's running at the Southwark Playhouse, every night until Saturday 30th May at 7:30.

More details can be found… Continue