We Choose the Moon 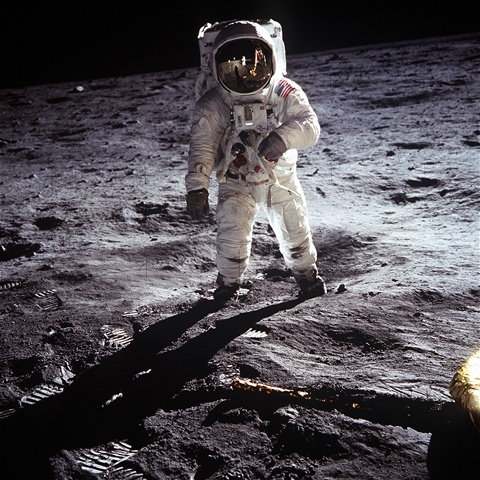 Contacting the World 2010 seeks expressions of interest from young performance companies to participate in a pioneering, intercultural project.

Contacting the World is a biennial international performance project developed by Contact in Manchester, one of the UK’s leading organisations creating work by and for young people. It aims to increase the skills, understanding and experience of young people from around the world in… Continue

Follow the journey of a new Welsh company as we set out to devise a show & tour Wales.

Edinburgh, Sue and a bit of sun too

At the end of a manic week in Edinburgh the grand news is that after Deepcut's success last year you g Welsh artist Dafydd James and colaborator Ben lewis have one one of the fringe's major awards as the best music theatre show for their gorgeously deranged, musically masterful and very funny indeed production My Name is Sue at the Total Theare Awards. As one of the judges I wish I could say I fought through Twelve Angry Men style odds to get this righteous result but in fact, despite strong… Continue

'Cell' is adance theatre piece that explores the immense human capacity to create and to destroy and asks how people in any time or place can come to embrace what they previously found abhorrent. 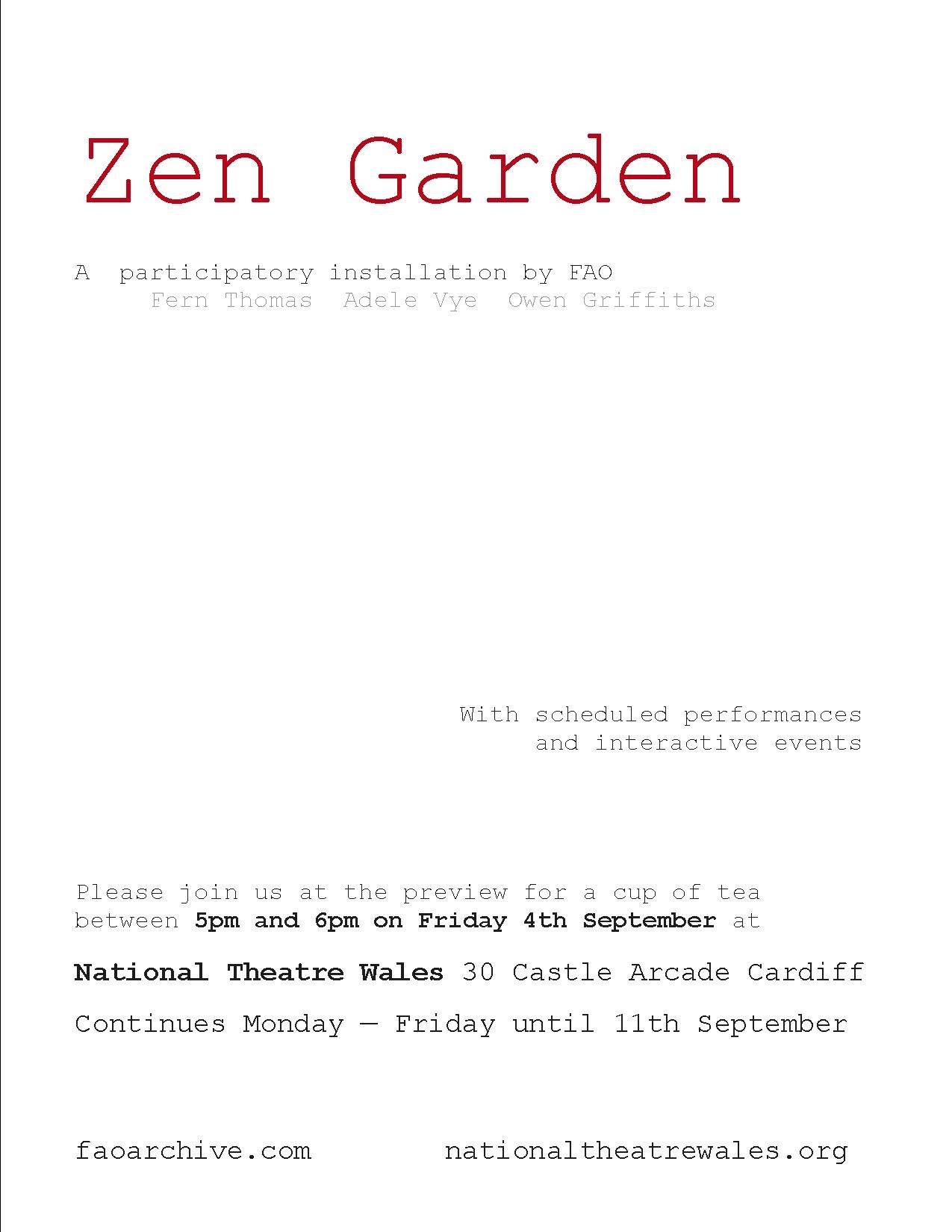 I have just been notified that a certain lindakhalifa is attempting to contact members of the network asking for email addresses in a rather flirty way.
I am sure you have understood that it is a spam and meanwhile I look into what we can do to discourage her attempts, you shouldn't give any of your details away.
I have to admit that spam mails are progressing, the names generally used were Wendy or Kim but Linda Khalifa rocks!
Still don't answer it.
M

If your passionate about making theatre with young people get in touch!

Mess Up The Mess Youth Theatre Company is a professional theatre company committed to creating theatre with and for young people. From one off workshops to film projects and full length productions Mess Up The Mess is excited about upskilling young people to have their voices heard. We are currently looking for a wide range of theatre professionals to lead master classes/workshops with our core youth company from street performers to clowns, cabaret artists and forum theatre specialists we… Continue

That Khalifababy/Linda is a flighty piece, spreading misspelt gender-testing seduction willy nilly. How many of us got that mail?
Is it spam? Damn right: it's a meat auction.
Or prankster art? - in which case, yeah, point made, classic. Not.

Prologue: No Sleep Till Veenhuizen


It had just gone 03.45 on the morning of Friday 21st August. In just over twelve hours time I would begin the PeerGrouP’s 24 Hour Workshop – De Afleiding. The cab was on time, my flight to Schipol booked, and I even had a breakdown of the… Continue

They have cancelled the morning lighting session. I did not set my alarm. I climbed out of my bed at 7.47, which as a parent who has been programmed by my daughter to wake at 6.24 no matter how late I went to bed, was a luxury. I got to bed about 1.30, after celebrating the brevity of the post-performance lighting session, by utilising the time saved to buy my board op a drink, (it was his shout, but he has a mate on High School Musical 2, and while he was getting updates on the hilarity of… Continue

Getting Down and Dirty at the Green Man Festival 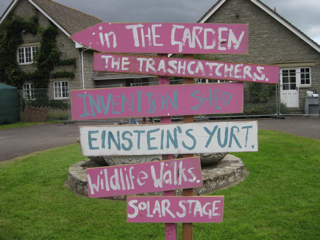 Last weekend I was at the Green Man Festival, which takes place in the beautiful Brecon Beacons just off the Crickhowell-Brecon A Road. I had gone with Lucy to see one of the loveliest festivals in Wales and to see if there was any way that National Theatre Wales could plug into this activity. 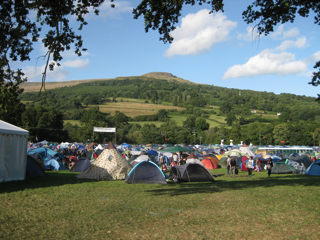 If all central London theatres changed their practices so they only switched stage lights on half an hour before each performance,they could collectively save over £100,000 a year in energy costs. So says the Mayor of London’s plan Green Theatre: Taking Action on Climate Change.

When told of NTW's plans to be Carbon Neutral from the outset, Mayor Boris Johnson said… Continue

Two of my most interesting theatre outings in recent weeks have been to shows by theatre legends - featuring some very feisty ladies of a certain age. We often hear about the lack of good parts for older actresses (other than Judi Dench), and it's no doubt true. But in Peter Gill's new play, Another Door Closed at Bath Theatre Royal, and… Continue

I am currently spying on the National Youth Theatre of Wales 2009. Inconspicuously wedged in-between our associate directors Mena and Suzie, I am party to a process which takes 60 young actors, stage managers and designers from nothing to a full scale tour of ‘Century’, a commissioned work by Manon Eames...in 4 weeks! How I got here I’m not exactly sure, but being 22 years old, thus too old to be a company member yet too young to be a member of staff, I find myself in the unique and intriguing… Continue

Matt and Mathilde in Holland with Peergroup

I am in Groningen in a hostel after a very nice evening with Sjoerd where we went to see a festival opening night that got cancelled because of a storm (well actually two storms unluckily meeting above Groningen) and finally ended up in a Greek restaurant with disappointed festival-goers friends.
We talked about many things through out the evening while the lighting and torrential rain raged outside.
Sjoerd, prompted by my questions gave me… Continue

We recently received Tom Creed for a Creative Visit in our Castle Arcade offices.
Tom is Associate Director of Rough Magic, co-founder and Joint Artistic Director of Playgroup, Theatre and Dance Curator of Kilkenny Arts Festival and board member of the Dublin Fringe Festival.
He showed us his varied and prolific work and also talked to us about Seeds programme, an Arts Council, Aib and Rough Magic initiative to… Continue

Laughter and Tears: Preparing For A Dutch Adventure

On Friday I go to Holland to take part in ‘De Afleiding’, a 24 Hour Workshop delivered by PeerGrouP. You may have seen my mug expressing sheer joy on this very site upon hearing the news I had been selected to join Mathilde on the excursion – and joy is very much what I felt when selected. Now, as the… Continue