Edinburgh 2012! Thoughts and an award.

As one edinburgh fringe finishes, now is perhaps the time to start thinking about next years festival!

There were a number of shows from Wales at this years fringe of varying sizes, from both national theatres to one person shows. Was it a good experience? What did you learn from going? Are there lessons we can share?

Kat Jones bloged about Bandwagon's experiences this year and the…

The National Theatre of Kosovo

I have sent the following email to relevant members of the Kosovon government and press.  It is written from a personal perspective, but I feel that it represents the overwhelming view of people in this community.  I'm also attaching Jeton Neziraj's original email calling for action at the bottom for anyone who didn't see this.  Let's hope that Eid sees a change of spirit in the Kosovon government!

It is with great distress that we at National Theatre…

Reviews and Concert in Buenos Aires

I'm very proud to be performing again this Saturday with Oscar Edelstein and his ensemble, the ENS in Buenos Aires in the Casa de la Cultura. The concert is from the new disc "Estudios para La Grilla Acoustica / Studies for the Acoustic Grid" in which I am the guest vocalist. The last performance was in La Trastienda which is one of the most cool live music venues in Buenos Aires (see photo below).

I received two fantastic reviews, one from a newspaper in the Province of Entre Rios… The Disabled Avant Garde (aka DAG), comprising performance artists Katherine Araniello and Aaron Williamson, along with eight other disabled artists from Wales, are staging an 'alien invasion' - a two-day encampment on the banks of the River Severn in Newtown on the 9th and 10th of September. This performance event will test perceptions of what makes us 'insiders' or… Continue

For one whole year Ludus Ludius Improv shall deliver rehearsals for as many people as is possible for no charge at all. Held at Rummer Tavern or an alternative venue weekly to build the improvisational comedy community in Cardiff and perform comedy in this improvised fashion. The UK has a endless supply…


Rachel and Chelsey, two of the Young Critics recently gave a presentation on the scheme at The National Rural Touring Conference.

4* review for play about Shurl from the valleys

An Audience with Shurl is a production with undeniable heart. And, appropriately enough for a show which hails from the valleys of Wales, it is a heart…

After trial sell-out runs at Chapter Arts Centre in their home city of Cardiff the company have taken “Muscle” their first ever production to the madness that is the Edinburgh Festival. With nearly three thousand shows, forty thousand performances and people travelling from all over the world, the competition is fierce and can be both… Continue

As National Theatre Wales Creative Associate I have been tasked with the challenge of evolving the ‘Assembly’ strand of our work.  I have to cycle across Wales, in order to enjoy, explore and familiarize myself with the Welsh landscape.  I have experienced some of the beauty on offer across the country & felt the best way to experience more would be a bike journey.  My 13 day journey will begin on 2nd September 2011 and will finish if all goes accordingly on the 14th… Continue

Putting your 'work' where your mouth is: Appeal for support to Freedom Theatre and Palestine.

It appears the situation is not getting any better. I fear that the international respond to the killing of Juliano Mer-Khamis has alerted Israeli forces of the Freedom Theatre 'connections' with outside political powers through 'acting' forces. As a result the army must have been instructed to do their upmost to try to silent its voice and kill their work with Jenin youths. Theatre has the power to bring the conflict again to the front page. This power should be put to action by waking up…

National Theatre Wales is keen to foster new directing talent.  We believe that one of the most effective ways to develop as a director is by spending time in the rehearsal room observing and supporting more experienced individuals.  Therefore, during our second year of work, we are again offering opportunities for emerging directors to become involved in six of our shows.

Each emerging director will be given an all-in fee of £2,000 (to include any travel and accommodation…

The Freedom Theatre Jenin again targeted by the Israeli Army

At approximately 02:00 in the morning of the 22nd August the Israeli army surrounded The Freedom Theatre and the Nagnaghiya family home.

Jacob Gough, the Acting General Manager at The Freedom Theatre left the office at about 01:45: "As I literally entered my home I got a call from neighbours of the theatre saying the army had surrounded the theatre.”

Ready for the odyssey. 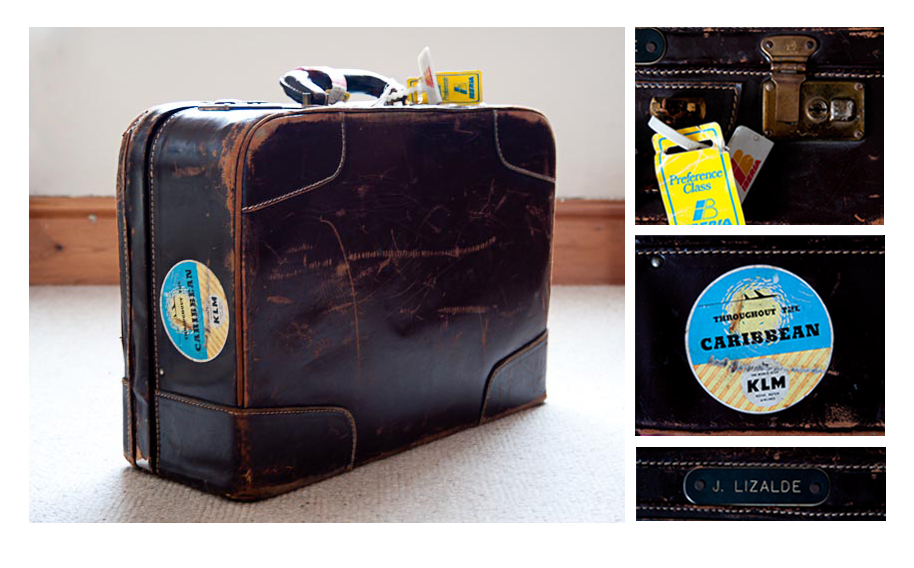 Tomorrow my odyssey to collect my father’s slides will start. The itinerary will be Cardiff-Bristol-Barcelona-Zaragoza-Barcelona-Bristol-Cardiff.  And, I thought that this vintage leather suitcase would be the perfect ally.

This old suitcase was first owned by my grandfather who used it when he emigrated to Caracas (Venezuela) after the spanish war.…

So after a week at the worlds largest arts festival here are a few of my highlights, in the order I experienced them:

A masterclass in puppetry. A deceptively simple show and a demonstration of the company’s mastery of their craft. Whilst I have some reservations about the show’s structure – particularly the 2nd part – it’s still a glorious piece of work.

National Theatre Wales is seeking to appoint a Communications Assistant 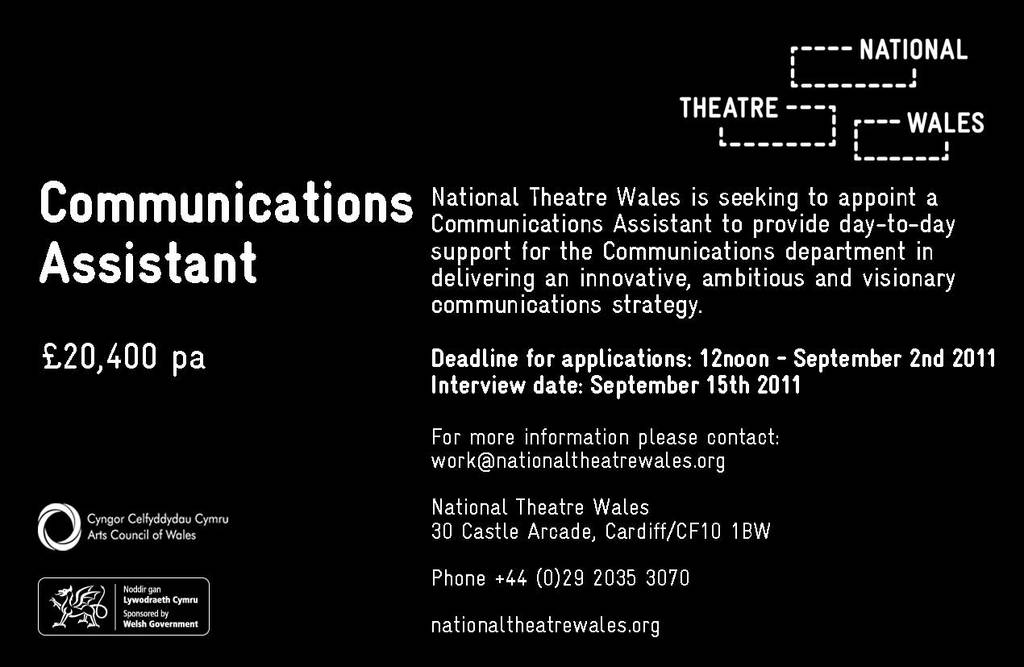 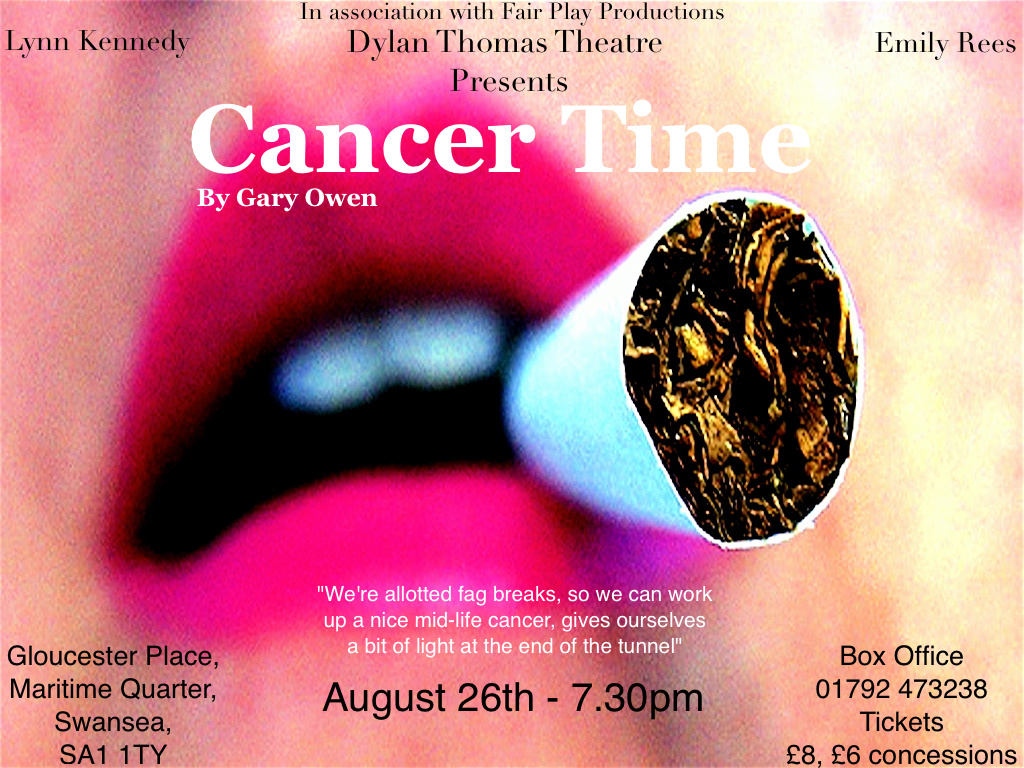 After performing at the Arches for the On the Verge festival and receiving excellent reviews, we decided to bring the show home to a Welsh venue....

"We're allotted fag breaks, so we can work…

More great reviews, and we're shortlisted for an award!

Another great day for the cast and crew of The Dark Philosophers.

"This is, without a shadow of a doubt, the best thing I have seen in…

The Scotsman published a wonderful four-star review of The Dark Philosophers in yesterday's paper.

And today we had another 4-star review in The List, which calls…