A very happy new year indeed to everyone who is part of the National Theatre Wales community.  It's been an extraordinary year for all of us - from the scale and spirit of that Sunday night at a roundabout in Port Talbot when 12,000 people turned up to see the heartstopping final moments of The Passion, to the storming of Edinburgh by Welsh Theatre companies including both our national theatres, the great Welsh talent behind Muscle, and many new and smaller companies proudly strutting their…

Just found out there has been a hugely successful musical on Broadway called The Book of Mormon - well I never .........

Can Theatre Change the World?

Joseph Munyambaza is going to study pre med at Westminster College in Missouri USA. He has a partial scholarship and the additional fees have been met by donors inspired by his story. What is delightful about this news is three things - Joseph is a refugee and has been in the Kyangwali refugee camp Northern Uganda, since he was 6 years old; he decided to study medicine after his sister from malaria  with her unborn child (she was 7 months pregnant and was denied medical help because…

Firstly I'd like to thank you all for an invaluable time at Amelia Trust farm,you were a great bunch to work with; a passionate, generous and creative bunch of people......it was such an adventure with lots more to
come.

I'l start with a big apology to my room mates for my hurrendous snoring habits, but luckily for me you tollerated the sounds and didn't banish me to the next room for a week (thank you ha)

Before Catherine arrived for our first day of trainning,…

What responsibility our national theatre has to theatres across Wales

In response to the debate that started on the Bradley Manning group we wanted to ask you "what responsibility our national theatre has to theatres across Wales".

Should we be producing more work on the stages of our theatres across Wales?

It's quite a big question so what do you… 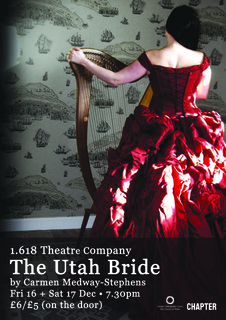 Rebecca and Alice: a mother and daughter divided by a generation, religion and men. In the dead of night Alice returns to the maternal home and Rebecca wakes, only for light to be shone on the darkest corners and for truths and…

Back home in Shropshire. So feel a bit of a cheat posting on NTW from foreign shores...

I've had the itch and so been looking for some theatrical/artistic pursuits since being home. I've been to see a pretty good amature production in my "local" and I've been to a gallery space where I watched a man painting…

"Fill For Me A Brimming Bowl"

My latest short film - a Prelinger mash-up based on the John Keats poem "Fill For Me A Brimming Bowl".

a) It's less than two minutes long.

b) It features a woman in her underwear.

Following two days of intense rehearsal on David Lee Smith's new play SUPERNOVA we opened the doors to a sharing last Thursday evening.  With an amazing cast comprising Matthew Aubrey, Adam Redmore, Bethan Witcombe, Zoe Davies, Oliver Wood, Arwel Rees and Gareth Jewel we had a rehearsed reading - on our feet, script in hand.  The actors really did an amazing job - and I so enjoyed working with everyone.

The reading was followed by an invaluable feedback session.

It was a really… 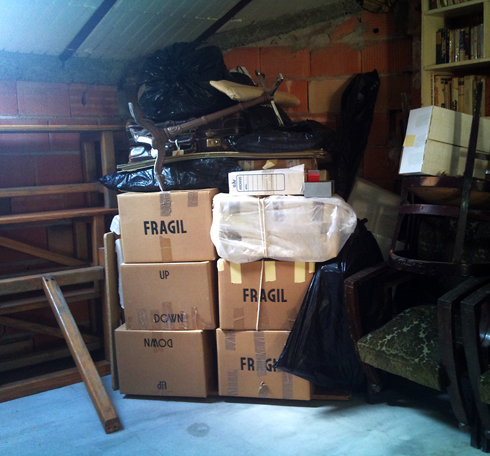 Believe it or not, these are the cherished objects of 21 years of a family of four.  More or less 2 boxes by person.

Every single object that wasn’t sold, donated, lent or trashed, it is in those boxes.  The certainty that my father’s slides were in one of them represented the 85%,  the other 15% was built up by the hesitation on my mother’s answer…

Sgin Ti Syniad is a community project in Caernarfon, leading up to Sgint- the first ever Welsh language verbatim play. Both the play and the community project have the same theme: People's relationship with money.

Over the last two months I've been up in Caernarfon meeting, training, and developing ideas with the Creative Team. This project is an…

Over the last month, thanks to NTW, I've been continuing to develop thoughts for a piece of work that interrogates our borders. Yesterday I was invited by Dave Evans to join a bus full of refugees and asylum seekers on a day trip to St Fagans. They were invited to collaborate in constructing a temporary asylum seeker's residence for refugee week next June. I cannot fully describe the effect of engaging with the carefully curated National and…

The Importance of 'My Profile Page'

The first in a series of weekly blog posts explaining 5 key changes we’ve made to the online community.

By now you’ve had enough time to navigate yourself around the latest changes of the online community 2.0 this post explains changes to the ‘My Profile’ page.

Bradley Manning goes on trial tomorrow accused of the biggest leak of classified information in US military history. The next day is his birthday. Just as we start work on The Radicalisation of Bradley Manning - NTW18, the shape of the case against him and his defence will get…

It’s been a pretty active couple of weeks at National Theatre Wales HQ we have been monitoring your feedback, fixing bugs and replying to your emails surrounding the changes made to the community.

We had a few minor glitches and initial scary moments over the first couple of days of the launch. The disappearing of the discussions from groups was one of those moments, but a little bit of digital tinkering and we found them…

Bridgend Youth Theatre is looking for youth theatre tutors and a director/artistic team to lead its junior show involving around 200 young people aged 8 to 14 years.

Commitment would involve weekends during term-time from January until July with a show at The Grand Pavilion in Porthcawl towards the end of July.

This is no time for drinking...this is a time for talking'.

This Friday 1.618 have the pleasure of showing of a play in development under the direction of Wyndham Price and  performed beautifully by Sara Lloyd Gregory and Sharon Morgan.

We have had a fascinating couple of days meeting the characters, looking at the complexity of the mother and daughter relationship...the richness of the story created.Having resisted writing naturalism and kitchen sink for…

My name is Daniel O'Gorman. I am a Director/Producer and Talent sho Judge in theatre, film and Concerts. In January 2012 I, along with a committee of others will be launching 'Cardiff's Got Talent', which will run intermittently from January through to July. The competiton is in partership with the PAL Appeal who raise money for cancer care. Due to my commitments elsewhere I will not be Directing this years competition, I will however be Judging the Final and Executive Producer. We are in…

On Saturday 3rd December I attended a leadership training day with NTW and my fellow team members. This was a great chance to see the development of team from the launch year and where we're heading.

I feel that in the launch year (and beyond) I have grown so much with NTW, from my starting point being involved in 'For mountain Sand and Sea' in Barmouth the journey I have taken to get to this Team leadership training has been so beneficial for me.

The training really got me…
Continue

Me being a spoken word enthusiast  I  try to see as many performers as possibly can however i live in the middle of nowhere so events seem to be few and far between. So when i heard of “Counrty Boy’s Struggle” a new spoken word play I was excited until I looked at the location, it was at the Albany in London and me being from Wales meant I couldn’t afford the travel expenses. Fortunately for me I was in contact with a few members of the National Theatre Wales’s team and they informed me of…